What Makes an Outbreak?

The media love outbreaks. The headlines and fear surrounding outbreaks are as infectious as the disease itself. E. coli, cholera, Legionella; these bacteria are household names and the cause of some of the most infamous bacterial outbreaks in the last decade. Outbreaks in Germany, Haiti, and Edinburgh all breached public health control to cause high numbers of fatalities, and the search for the source caused great economic burden for individuals, companies and countries.

While newspapers cover death rates and those declared responsible, the genetics that make a strain of bacteria capable of infecting hundreds – if not thousands – of people remain unreported by the media.

How do bacteria become so uncontrolled that they cause an outbreak or epidemic?

In Germany, 2011 – the German Protection against Infection Act reported that 4,075 people had been infected and 50 killed by an unusual type of E. coli. The outbreak spread across fifteen countries throughout Europe, converting the outbreak to an epidemic. This massive death toll reflected the extreme virulence of the strain, where the bugs were armed with both a toxin and resistance to drugs. Strains are what bacterial species can be separated by, and serogroups are groups of strains with similar characteristics. The research that unravelled the mysteries behind the bacterial cause of the outbreak surprisingly identified the 0104:H4 serotype of E. coli, bacteria which had never caused a large-scale outbreak before. 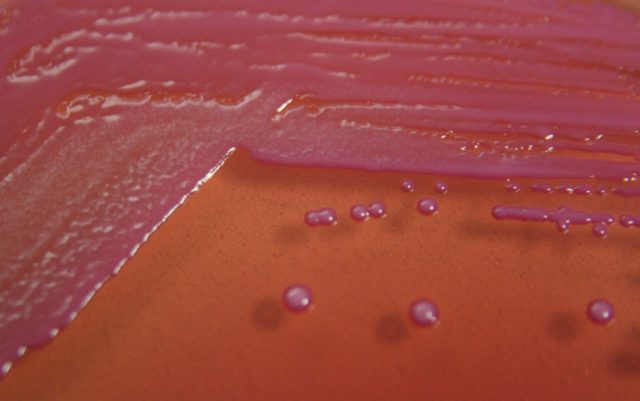 This strain produced a “Shiga-toxin” that is normally only produced by bacteria within the E. coli serogroup which includes the 0157:H7 bacteria that caused the infamous outbreak in Wishaw which claimed the lives of 21 in 1996. Viruses infect every organism on the planet, including bacteria, and research into characterising the German outbreak revealed that it was a viral infection that deposited the genes needed to be able to make the Shiga-toxin within the bacteria 1.

This viral event was significant for the development of the highly aggressive strain.  The toxin led to the symptoms being far more severe than usual. In many patients, diarrhoeal disease developed into haemolytic-uremic syndrome (HUS) with symptoms as serious as kidney failure and neurological issues 2.  Those suffering from HUS required both intensive dialysis and fluid maintenance but even with the treatment, the infections were often fatal. The Shiga-toxin involved in this outbreak destroys blood vessels all over the body, including the kidneys, leading to bloody diarrhoea 3.

Another critical event that allowed this strain to spread was the further acquisition of genes for antibiotic resistance and survival, this time from bacteria within the same E. coli group. With these genetic advancements the bacteria were able to spread rapidly, causing highly infectious diarrhoea and infections untreatable by the usual antibiotics.  While people were dying, the search for the source of the outbreak was both long and economically burdening for both Germany and Spain 4. Spanish cucumbers were the first source accused of being the cause, before Brussel sprouts from Germany were finally implicated by a European Food Safety Authority taskforce 5.

The German outbreak illustrates how bacterial evolution can transform strains into hypervirulent mutants that spread across continents and how incredibly easy it is for bacterial DNA to change and be changed 6.

Considering how easy it is for bacteria to become hypervirulent, are specific environmental conditions even necessary for an outbreak?

For the 2010 outbreak of Vibrio cholerae in Haiti and for the closer to home Legionella pneumophila outbreak in Edinburgh, 2012, the environment was an essential factor in the spread of disease.

The cholera-causing bacteria were curiously found to be almost identical to the current South Asian cholera outbreak strain, suggesting that the source was outside Hispaniola. Before this outbreak, Haiti had been free from cholera outbreaks for over one hundred years and the bacteria overwhelmed the country which was still recovering nine months after a 7.0 magnitude earthquake 7. Devastatingly for Haiti, it took mere weeks for the disease to spread through all provinces to the Dominican Republic and the epidemic is ongoing, with over 9,000 fatalities so far.

Cholera itself is another diarrhoeal disease which can kill in 48 hours if untreated, dehydrating its victims dramatically 8. This bacterium also produces a toxin, which confers virulence, and is spread by the consumption of water contaminated with the bacteria 9. With Haiti’s public health infrastructure already damaged by the recent earthquake, the conditions were optimal for the diarrhoeal disease to spread as quickly as it did – infective faeces, people living in close conditions and unsafe drinking water 10.

This demonstrates that in some outbreaks, the environment plays an important role in facilitating titanic spread. It has been said that if Haiti had not spent the last hundred years without a cholera epidemic, the devastation would not have been as bad as it was.  Additionally, the conditions after the 7.0 magnitude earthquake made the spread of diarrhoeal disease easier.

The main international controversy surrounding the outbreak was the source of the bacteria. Since the strain was found to be very similar to South Asian strains, the suggestion was that  human error caused the outbreak. It was not until after a thorough investigation, however, that United Nations Nepalese troops were confirmed as the source 11.

Closer to home in Scotland, the recent Edinburgh outbreak of Legionnaires’ disease in 2012 was influenced by both environmental and genetic factors. Legionella pneumophila naturally exists in freshwater environments but has the ability to cause serious pneumonia in those infected by aerosol spread. Because of it’s natural reservoir,bacteria are known as “accidental pathogens.”

Like the German outbreak and unlike in Haiti, the strains that caused 92 infections and 4 deaths in Edinburgh were incredibly diverse because of bacterial evolution 12. An investigation revealed that the bacteria were highly mutated and, like E. coli, had acquired several virulence genes; because of this genetic diversity, the source remains unconfirmed.

Where the environment becomes important for the outbreak was when the optimal conditions were met for the spread of disease. Wind, heated and evaporating water are almost always essential for outbreaks of Legionella-associated pneumonia and after analysis of the environmental conditions, suspect fell on industrial cooling towers in the northwest region of the city.

In Haiti and Edinburgh the environment and human error played their role in the outbreaks of cholera and Legionella, influencing the speed and infectious nature of the disease in each country.

What have we learned from the past?

What we can learn from past outbreaks is that infectious diseases are ever evolving. Due to  a close relationship between evolution and environmental conditions, we can’t predict the next outbreak just as we can’t accurately predict the next natural disaster.

The development of new drugs is the most integral component in the fight against bacterial infections, alongside the basic research into the acquisition and use of toxins which cause disease.With outbreaks, it seems like the only thing we can do is attempt to prepare a strategy for defence.

This article was specialist edited by Nicole Nayar and copy edited by Rebecca Laidlaw.

Imogen is completing her MSc in infection biology at the University of Glasgow where she also obtained her undergraduate in microbiology. She has a keen interest in both research and journalism.