Imagine a world where you could look to the sky and see not one, not two, but three suns. That is the reality on planet KELT-4Ab. Although the existence of the planet has been known for some time, it was thought to exist in a binary star system, where its star was orbited by another. But closer study of the planet has revealed that what was originally thought to be a second star orbiting KELT-4Ab’s primary star is actually two, far-off stars closely orbiting each other. 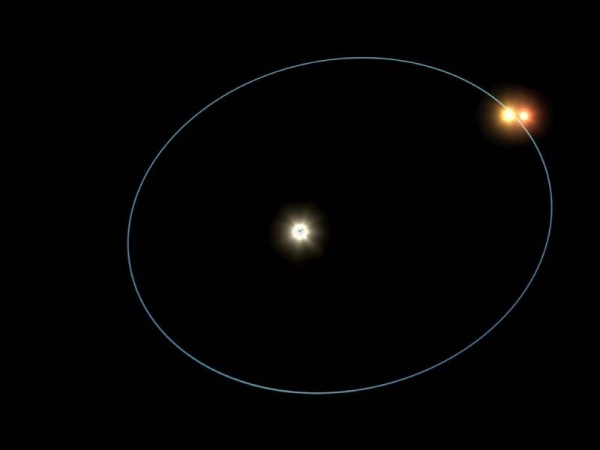 KELT-4Ab is a gas giant, similar to Jupiter, which orbits its sun every three days. The nearby stars orbit each other approximately every 30 years, while orbiting KELT-4Ab’s sun every four thousand years. The system has created great excitement among space scientists as three star systems are very rare – this is only the fourth to be discovered. It is thought that the view from the planet would be similar to that from 1885Ab, the first of this type of system to be discovered. The main star would appear very large in the sky whereas the other two stars, being much further away, would appear dimmer and around 40 times smaller (see image at top of page).

The discovery was made by a group of scientists working at the Harvard-Smithsonian Center for Astrophysics (CfA)1. They analysed data from two telescopes, one set up in Arizona, US and the other in South Africa, as well as data from collaborators including universities, professional observatories and amateurs. Originally, the researchers studied the planet KELT-4Ab to better understand how a gas giant could stably orbit so close to its sun. It was only after analysis of the data collected that the true nature of the system was revealed. In fact, it is now theorised that the nearby binary system itself enables KELT-4Ab’s close orbit to its sun.

The system is the nearest three star system to be discovered and so presents an opportunity to research how these systems are formed. Who knows what this unusual system will reveal next.

Hollie Wright is a physics graduate from St Andrews University. She is now studying for an EngD in Applied Photonics.