Last year saw the rise of turbo-ecstasy, pills of various guises, which were adulterated with PMA or PMMA 1. Whilst these compounds are related to MDMA (the active ingredient in ecstasy) they have the potential to cause toxic effects at relatively low doses. In essence, taking two tablets of regular ecstasy (at a typical concentration) might lead to a “stronger” trip, but taking two turbos might leave the user ever so slightly dead. Media coverage peaked around festival season last year with organisers warning against using these and other illicit drugs, although it’s quite apparent that even the legal alternatives are not safe 2. There is a growing trend among campaigners towards harm reduction and I leave it up to you, dear GIST reader, to decide how effective an idea this is.

Importantly, chemistry has an important role to play in potentially saving the lives of many drug-users with testing-kits available to check for MDMA content 3. Following the emergence of PMA, there is even the Mandelin-reagent kit to check for the potential presence of these new adulterants 4. But as a chemist I’m left wondering about the veracity of these tests and I question whether these types of reagents aren’t providing a false sense of security to a vulnerable user group. Presumptive tests are inherently limited and when a new and unknown adulterant inevitably hits the scene, we can be sure to see a repeat of last year’s events. The only precise and accurate way to determine what is in a tablet is to perform a full chemical analysis (NMR, GC-MS and HPLC to name but a few techniques). All of this assumes that your average drug user even bothers to test what they are taking. 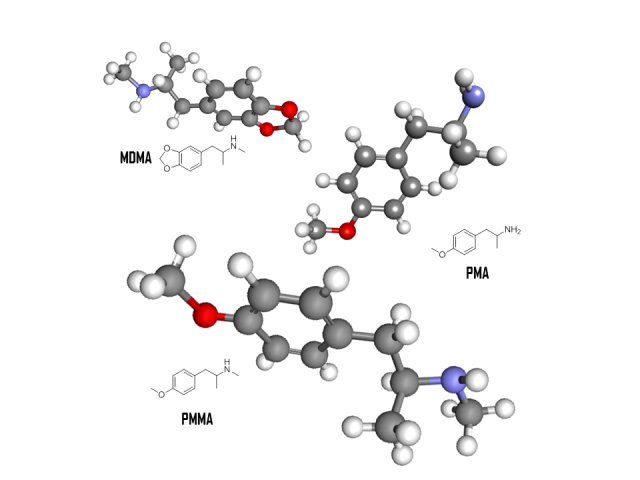 Perhaps a way forward is for the UK to set up a scheme like that seen in Holland and provide such analysis for drug users via drop-in clinics 5. Whatever does happen, it’s safe to say that a repeat of the tragedies seen last year seems almost inevitable unless something changes. The media and scientists alike are stuck in an information-based game of cat and mouse, futilely scrambling to tell you which pills not to take. That being said, whilst I have your attention Glasgow (and anyone else who might be reading this) steer clear of Green Apple and Pink Superman tablets, or they could be your last 6.