Conaill Soraghan looks at Glasgow’s strategy to become one of Europe’s most sustainable cities within 10 years.

Sustainable Glasgow is a synergy between the city’s council, the University of Strathclyde and a host of businesses with the aim of making Glasgow one of the most sustainable cities in Europe within the next ten years. This article is the first in a series tracking the progress of this ambitious project. It will address what the initiative hopes to achieve and highlights some of the plans in store for Glasgow.

The initiative is focused on climate change, but not as an obligation – it is an opportunity to deliver economic growth and help tackle social issues. Launched back in January 2010, the initiative outlines a strategic approach to reducing the carbon emission and energy consumption in Glasgow. Equipped with a sound understanding of Glasgow’s energy demand, the initiative proposes a raft of sustainable and low-carbon projects. These projects fall under the following categories:

In a bid to move towards a low-carbon economy, the European parliament have set a target of reducing greenhouse gasses by at least 20% below the 1990 levels and to increase the share of renewables in the energy mix to at least 20%. In line with these targets, the Scottish Government’s Climate Change Act has set a target of reducing carbon emissions by 42% by 2020 compared to 1990 levels, with a further reduction to 80% by 2050. These 2020 targets are the main driving force behind the Sustainable Glasgow initiative. The focus is identifying and supporting innovations that are both technically and feasibly achievable within a ten year time frame.

Sustainable Glasgow will go significantly beyond achieving carbon emission reductions. The goals of the projects involved, over and above improving the environment, are to deliver investment, create jobs while assisting with community redevelopment and tackle fuel poverty. Essentially, the initiative lays out a collection of projects that will help Glasgow attain the goals set out above. A brief overview of the projects identified will highlight the broad range of areas that Sustainable Glasgow will endeavour to support.

On the topic of energy management, efficiency and policy one of the big ideas is to promote Glasgow as the leader in smart grids in the UK. This is the general term for any technology that is transforming the aging power-grid into a network resembling the internet with two-way flow of information as well as electricity. The essential components are smart meters – measuring devices at the point of energy use that correspond with data management centres. These smart technologies open up a host of new efficiency measures such as household appliances communicating with the power grid in order to switch off when the price of electricity is too high. This has the potential to curb demand for electricity at peak times preventing fossil fuels being burned unnecessarily – a phenomenon often observed five minutes after Eastenders when half of the population is trying to boil their kettles. Currently, proposals are being developed with the regulator (ofgem), the independent system operator (National Grid), the distribution company (Scottish Power), and the consumers to develop tariffs and market structures that support demand side management. 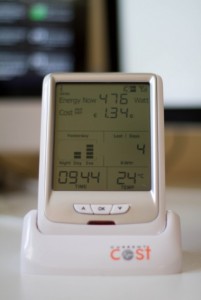 One of the key areas where Sustainable Glasgow have focussed their effort is in sourcing energy, be it electricity, fuel or heat, from low carbon sources. The initiative maps and quantifies the low carbon resources that could be realistically captured and utilised given the current technology, energy prices, and regulatory support mechanisms. Of all the low carbon energy sources explored, biogas is expected to contribute the most in reducing carbon emissions. Biogas is a product of treating organic waste using anaerobic digestion that can be used in place of natural gas. Sustainable Glasgow aims to implement a large scale anaerobic digestion facility within 3-5 years. The initiative suggests that the sewage treatment plants at Dalmarnock and Sheildhall should be considered as locations for anaerobic digestion facilities.

Over half of all the energy consumed in the UK is spent heating buildings and water which accounts for 47% of UK carbon emissions. Sustainable Glasgow believes that the best way of reducing carbon in this sector is by introducing a district heating system. District heating would replace individual boilers in homes and businesses with large centralized heat generation plants and a network of pipes for distribution of heated water. This method of heating is common in many European countries, but currently supplies less than 1% of buildings in the UK. What has been proposed is a radical transformation to the way houses and businesses are heated, and the major challenge is the large initial capital investment required to build the plants and install the heating pipe network. For this reason, Sustainable Glasgow have focussed on large commercial and public sector customers with a view of expanding to a residential scheme once the infrastructure is in place. Five areas with high energy demand and economic activity have been identified and currently Sustainable Glasgow is facilitating engagement with key customers and energy providers.

Transport systems are responsible for 20% of all energy consumed in the UK and 18% of Glasgow’s carbon emissions. The initiative’s proposals have three main themes: reducing private road transport and road freight; decarbonising road transport and public transport; and improving public transport. Among the range of constructive projects identified, one controversial proposal stands out. The initiative supports the introduction of a congestion charge for lorry and van movements in the city centre. Similar schemes in London and Stockholm provide evidence that the charges are effective; however a referendum in Edinburgh on the issue in 2005 was rejected by residents by a margin of 3 to 1.

Climate change and sustainability are expedient issues that are affecting all walks of life. Sustainable Glasgow should be commended for initiating such a far reaching approach to the challenge that incorporates so many stakeholders. The projects considered here are a very small sample of the ongoing work; for more information visit www.sustainableglasgow.org.uk. However, a year has passed since the initiative was launched. What progress, if any, has been made? The next issue in this series will consist of an interview with Richard Bellingham, Director of Sustainable Glasgow and Senior Research Fellow in the Fraser of Allander Institute in the University of Strathclyde, who is the academic at the helms of the comprehensive project.

Part 2 of the series is now available.

Conaill Soraghan is a PhD student in the Doctoral Training Centre for Wind Energy Systems in the University of Strathclyde.