Antibiotics truly revolutionised medicine. Illnesses that previously could have resulted in a long hospital stay, or even death, were suddenly eliminated with a short course of tablets. Since the discovery of penicillin, many more variations of antibiotic have been developed.

However, as their use became more widespread, scientists realised that some strains of bacteria had mutated and were now resistant to antibiotics previously used to kill them off. Using a certain antibiotic to treat a specific illness no longer worked. It is now known that the more exposure a strain of bacteria has to an antibiotic, the more likely it is to develop resistance to this antibiotic, especially if some bacteria are allowed to survive following treatment. This can happen if, for example, a course of antibiotics is not finished.

Modern medicine has become so reliant on antibiotics that now the use of some of these drugs is being held back, in order to reserve them as a last-resort in the case of widespread antibiotic-resistant infection. Many medical researchers have been anxiously watching numbers of cases rise: MRSA is now one of the leading causes of hospital-acquired infection; there were approximately 480,000 new cases of multidrug-resistant TB in 2013, and extensively drug-resistant TB has been identified in over 100 countries1. While all are usually still treatable with some extra effort, it has become one of the biggest problems highlighted by the WHO in recent years. 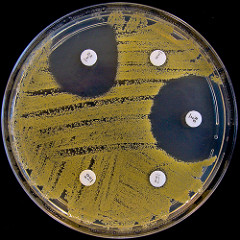 This problem is certainly not helped by the extensive use of antibiotics in livestock management. In order to prevent disease spreading through animals that are often kept in cramped, poorly-ventilated conditions, antibiotics are used not only as a treatment, but as a preventative measure and a growth promoter. This results in animals and the bacteria they carry having levels of exposure to antibiotics well surpassing that in humans. Whilst many countries have started to implement control measures for their use, some organisations such as the World Organisation for Animal Health claim that the issue of resistance to antibiotics is overblown, contesting these control measures2.

Despite attempts to reduce the use of last-resort antibiotics, genetic mutations were recently discovered in bacteria that caused resistance to almost all antibiotics currently used, including those supposedly reserved for last-resort use. Some cases discovered were worryingly described as “pan-resistant”3. What was the cause? There are still several countries, such as India and China, where these last-resorts are still being used in livestock.

While this news is certainly cause for concern, there are still many alternative treatments possible as resistance spreads. Combining two types of antibiotic, for example, can effectively work as a whole new treatment. Additionally, scientists are also investigating the use of silver to increase the effectiveness of antibiotics already in use. Nevertheless, there is a greater need than ever to scale back and regulate this silver bullet’s use before it is rendered useless.