One Small Step for Geckos, One Giant Leap for Materials

Geckos are largely underestimated reptiles most commonly found in the tropical regions of the world. Their ability to climb up walls and other vertical surfaces (even smooth surfaces, such as glass) without the use of any adhesive has been coveted by scientists for a number of reasons, including the production of super-adhesive materials.

This ability to scale walls stems from the gecko’s feet – more specifically, the millions of tiny elastic hairs on the gecko’s toes. These hairs, called setae, split at the ends in a branching effect to give spatulae which are nanoscale structures1. For the past century, scientists have investigated the methods by which these hairs on gecko toes can help the reptile with its scaling ability. Two major competing theories that were investigated were mechanisms involving the use of hydrophilicity and capillary action and the use of van der Waals forces. 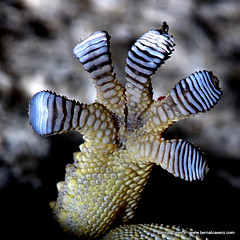 In 2002, Autumn et al published a paper whose findings showed that it is the proximity and abundance of setae and therefore spatulae on the surface of the toes that causes this dry adhesion effect by means of van der Waals interactions2. The dense layer of setae and spatula spread out when pressed to a surface in order to maximise surface area and therefore contact with the wall or surface. A build-up of weak electrical attraction, i.e. the van der Waals attraction, occurs and produces the observed adhesive property3.

Since the discovery, many research groups have been hard at work trying to create a synthetic adhesive that acts in the same way as the setae on the gecko’s feet do. Geckskin™ is a super-adhesive developed by scientists at the University of Massachusetts, and is composed of stiff fabrics (the skin) and soft elastomers (the pad). Draping adhesion is produced between these two materials when the pad conforms to the wall surface, while the skin provides tension to the system. This allows the adhesive load to be distributed evenly across the Geckskin™ surface and also allows for the quick attachment and detachment of the pad from surfaces, while expending little energy. (For further insight see here.)

Another gecko-inspired invention includes a climbing system developed by engineers at Stanford University. This system involves attaching polymeric adhesives to easily held “grippers”, which have springs attached in order to absorb some of the force involved with scaling a vertical surface. The engineers also created platforms for the climber’s feet to rest on, and linked these to the hand-held grippers in order to transfer the work needed for climbing to the feet4.

One thing’s for sure, with the United States Defence Advanced Research Projects Agency and NASA interested in this technology, it shouldn’t be too long before we see some more amazing gecko-inspired innovations.