Geothermal energy in the UK: Hot topic or a Utopian dream?

Could we one day see geothermal energy produced in Icelandic power plants such as the one above supplying the UK with electricity? Image credit: Gretar Ívarsson via Wikimedia Commons (CC BY-NC 2.0 License)

The inside of the Earth is a tremendous store of heat energy. 99.9% of the Earth’s interior is hotter than 100℃. This internal heat energy is known as geothermal energy, and it can be harnessed for electricity generation and heating purposes. The ability for a region to generate electricity and heat from geothermal heat sources is dependent on the geology of the area in question. Consequently, not everywhere can harness geothermal energy in a cost effective manner. If heat and energy production is possible from geothermal sources there are significant benefits. Geothermal energy produces no direct greenhouse gases and is, on a human timescale, infinite. Knowledge of this potential energy resource is not new; the first electricity generated from a geothermal source was produced in 1904 in Central Italy. 24 countries across the world now have geothermal energy plants, including countries like Iceland, New Zealand and Costa Rica. In addition, deep geothermal energy systems are being developed in countries such as France, Australia, Japan, Germany, the USA and Switzerland and one is also being considered for construction in the UK.

Iceland has an abundant availability of geothermal energy because it is located on the volcanically active Mid-Atlantic ridge. Typically for every kilometer drilled into the Earth, temperature increases by 25-30℃. This is known as the geothermal gradient and varies depending on the underlying geology. In parts of Iceland, magma is much closer to the Earth’s surface than in other parts of the world, meaning the temperature of the underlying rocks are much hotter at shallower depth than in most other areas of the planet. The effect of having magma so close to the surface is that in parts of Iceland, the temperature increases by 200℃ with every kilometer. As a result of this unusually shallow source of heat, Iceland generates the vast majority of its electricity and heat from geothermal sources.

The UK is not volcanically active like Iceland, and the average geothermal gradient is a temperature increase of 26℃ per kilometer. There are however potential sources of geothermal energy in the UK that could be used for hot water production and possibly electricity generation. There are currently three main types of geothermal energy that have been considered in the UK. The first of these is also the shallowest and uses the difference in air and below-surface temperatures. Ground source heat pumps make use of the energy stored by the top 10-15m of the ground that is warmed by the Sun. Below 15m depths, rock temperatures are not influenced by changes in the air temperature, and with average air temperatures in the UK around 10-12 degrees centigrade, rocks below 15m will be warmer than the air temperature in winter, and cooler than the air temperature in summer. This temperature difference can be exploited as a source of heat for buildings in the colder winter months, and cooling in the warmer summer months. The process is based around simply moving heat from warmer areas to colder areas. Another potential use for ground heat storage pumps in the UK involves the water systems in some disused mines. In Glasgow, Scotland, many of the disused mines beneath the city have since filled with water and much of this water has warmed due to being at depth and its connection to deeper mining systems. There is currently research by the British Geological Survey (BGS) and other external organisations into the potential for these mine water systems to be utilised by local communities via ground storage heat pumps, or for district heating schemes. This sort of geothermal energy would be for hot water and heating purposes only because the energy available is not sufficient to generate steam for electricity production. 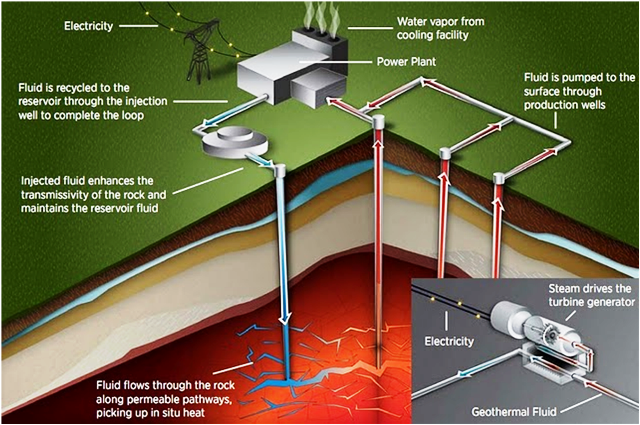 The second form of geothermal energy that could have potential use in the UK is at greater depth than the first. Certain rocks contain flowing water (groundwater), and at depth this groundwater is heated. The heated water can be extracted to heat buildings and is replenished with fresh cooler water, much in the same way that mine waters could potentially be used. The difference with this system is that it is at greater depth and requires a specific type of aquifer rock where temperatures are warm enough to heat the groundwater. There is a current UK district-heating scheme in Southampton that has been running since the 1980’s. Water is extracted from a borehole that is 1800m deep and taps into the edge of an aquifer under Wessex, and is then fed into the district-heating scheme. The heat extraction here is a passive process whereby injection of water is not required.

The third and deepest source of potential geothermal energy in the UK is called hot-dry rocks geothermal energy, and it requires an active injection of water as groundwater does not exists at such depth. Certain areas of the UK, particularly South West England, have higher geothermal gradients than the UK average because these areas contain more granites than are commonly found in the rest of the UK. Granite produces internal heat through the radioactive decay of the naturally-occurring isotopes of potassium, uranium and thorium. Granites have very little free flowing water in them, but it is possible to engineer a fracture system to enable water to be heated through the rock. This kind of geothermal system is called Enhanced Geothermal Well (EGW) and requires a form of fracking for development of the fracture system. Fracking in shale gas has been surrounded by controversy over recent months due to concerns about the safety of the process, but the fracking used in EGW’s is different to that used in shale gas extraction. Fracking of EGW’s is for engineering fracture networks only and is not a destructive process. 1
Once the fracture network is established the water is injected to depth where the heat from the granites warms the water or turns it to steam that can be used for electricity generation.

In 2012 engineering consultants Sinclair Knight Merz produced a report on the potential of geothermal energy in the UK. 2
The findings of the report stated that there were “widespread hotspots” for geothermal energy in the UK, in areas such as Cornwall, Weardale, Lake District, East Yorkshire, Lincolnshire, Cheshire, Worcester, Dorset, Hampshire, Northern Ireland and Scotland. The report also found that “cost reduction potential of the technology is exceptionally high” and that geothermal energy from deep sources could provide the equivalent of nearly nine nuclear power stations in renewable electricity (20% of the UK’s current annual consumption). The report went further saying: “Deep geothermal resources could supply sufficient heat to meet the space heating demand in the UK”. However the report did also find that “Despite this promising potential, the UK support regime is uncompetitive with other European countries.” The UK government’s online low carbon document claims “Heat-only projects are generally considered to have the greatest potential in the UK because the resource is more widespread and shallower”, while in the government’s Department for Energy and Climate change (DECC) also states that there is potential for geothermal energy in South-west and Northern England. 3

Despite these seemingly positive findings, there is currently only one functioning geothermal energy project in the UK – a district-heating scheme with a geothermal input in Southampton. There are no large-scale geothermal power production systems operational in the UK currently, however the Eden Project in Cornwall (South West England) is raising funds to build a geothermal plant to supply its own electricity and heating needs, as well as electricity for 4000 local homes via an EGW hot-dry rocks geothermal well. 4

Geopolitics aside, the biggest barrier to large-scale geothermal energy use in the UK is the expense of the process. The technology is initially very infrastructure-heavy and is perhaps not as refined as it needs to be. However, with the need for low carbon, sustainable energy ever growing, and with the potential rollout of other infrastructure-heavy energy extraction techniques (e.g. fracking for shale gas), could we see geothermal energy begin to grow in the UK? One interesting development in 2012 was the signing of a Memorandum of understanding between Iceland and the UK on geothermal technologies and the potential for electricity generated by Iceland’s volcanic activity to be supplied to the UK. 5
Since the signing it would appear that little progress has been made, but due to the huge surplus of geothermal energy Iceland possesses, it could be a potential area of exploration in the future.

Specialist edited by Aimee Gillespie and copy-edited by Derek Connor.

Chris is a postgraduate researcher in Earth Sciences at The University of Glasgow who works on environmental pollution from industry and ways to reduce & reuse industrial waste products.

Nothing like some beautiful nature to start the year of right! Here's to 2021 🌟