“It’s a poor sort of memory that only works backwards” – Lewis Carroll, Alice in Wonderland

Memories - it's all in your head. Image from A Health Blog via flickr (CC BY-SA 2.0)

Have you ever wondered why your friends can recall moments from their childhood with perfect clarity while you struggle to regain more than a fuzzy memory? For the past decade scientists and psychologists have been studying the way that we recall memories and have discovered that memory is not in fact linear, but fluid. So what does this mean for those people who can recall early memories like they happened yesterday? In short it means that your friend’s memory may not be better than yours, but their imagination might be, as every time we “remember” an image or event we remould and reconsolidate it. In layman terms – they may be recalling a genuine memory or they could be rewriting history.

This phenomena is known as recalling a ‘false memory’, and, while this may not be significant for most, for some people this can have a disastrous effect. False memory syndrome (FMS) occurs when the person recalling the memory believes it to be true and thus it affects their identity and day-to-day life. FMS and the research into it is still viewed as controversial and as such it is not officially classed as a mental disorder. However, this makes the prospect no less real or terrifying for the hundreds of people who have experienced it. FMS is a destructive condition and in some cases the person who has recalled the memory may refuse to address any evidence that contests the event that they remember. Those unfortunate enough to suffer from FMS tend to become obsessed with the memory, and will not allow for any correction of it, occasionally to the detriment of their mental wellbeing and personal relationships.

In the 1980s and 1990s, a number of patients who had been seeking counselling for depression or addictions came forward with ever escalating stories of childhood sexual abuse or satanic ritualistic torture. Adults came forward and claimed that as children they had been abused and had repressed the memories until they had undergone recovered memory therapies, such as hypnosis and guided imagery (we can’t all have a pensieve). One such notable case was that of the People versus George Thomas Franklin Senior, where Franklin’s daughter Eileen came forward in 1989 and accused him of raping and murdering her childhood friend 20 years previously. Eileen reported that she had recovered the repressed memory of the attack and gave evidence against her father at his trial, providing countless details of the attack and crime scene. Franklin was sentenced to life in prison for first degree murder based on the repressed memory and served six years before being later exonerated due to the credibility of Eileen’s ‘memory’ being questioned.

At this time, there were many accusations of crimes based on recovered memories of traumatic experiences. This prompted Elizabeth Loftus, a researcher in memory recovery, to investigate whether or not these memories were genuine. Since Loftus could not ethically try to convince people that they had been abused as children, she created the ’lost in the mall’ experiment 1. This experiment investigated whether or not a false memory of getting lost in a shopping mall could be implanted into someone’s mind by having a discussion about the false event. 25% of people in the study (with a small number of 25 participants) were found to have developed a “false” memory of the event. However, some researchers feel that the lack of ecological validity for this study reduces the significance of Loftus’ findings.

A step by step guide to memory manipulation

We can all have our memories manipulated by outside forces and the scariest part is how simple it actually is – it’s not all hypnotists or cloak and dagger theatrics. Most of us probably manipulate our own memories or the memories of our friends several times a week (by accident of course).

When an implication about a subject is taken to be the truth, i.e. a presupposition, then memory can easily be distorted. An example of this would be your friend asking you what shade of pink tie your chemistry professor was wearing in yesterday’s lecture. This implants the ’fact’ that the professor’s tie was pink into your head, even though the tie could have been green with orange stripes. Your friend has just sneakily implanted the false memory of a pink tie into your head. Loftus further expanded on this type of leading question in a study where participants were shown videos of traffic accidents and then asked to recall the information in order to answer questions 2. 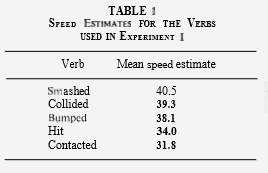 Results for the Loftus and Palmer automobile reconstruction study.

The results of the study found that the speed the cars were going at before they crashed varied depending on the verb used within the question. For example, when ‘smashed’ was used, the mean speed was estimated at 40.5 mph, while ‘hit’ gave a response of 34.0 mph. Interestingly, when Loftus asked the participants of the study if they remembered seeing broken glass on the ground, those with the “smashed” condition were more likely to say yes even though there was no broken glass present.

Of mice and men

False memories are not only created by the information present when we recall the event, but they can also be created artificially in mice, by manipulating their brain activity.   In 2014, two neuroscientists successfully implanted a false memory into mice by identifying the specific brain cells required in the creation of a memory, and then manipulating these cells to create a “new” (false) memory using optogenetics. Optogenetics is a technique which involves the stimulation of genetically engineered neurons by a light source replicating the natural process of neuron firing. This ground-breaking achievement presents a dilemma for the future of neuroscience and memory recall. For people suffering with Alzheimer’s or PTSD, this form of memory manipulation could be used as a form of treatment to activate memory cells artificially in order to help recall memories. However, this advancement also raises moral and ethical concerns as to whether manipulation of memory can be classed as a good thing and further raises the question of whether positive memories can be turned into negative ones, or even ‘deleted’.

As this technology advances, it is easy to see how, in our lifetime, your memory could be changed as easily as your hair colour. I for one find the prospect of ‘memory modulating’ a little alarming. What is the limit to these changes? How much is it possible to erase? It is a sad thought that memories, good or bad, can be forgotten by natural processes, much to the devastation of those affected by neurological conditions, but an even sadder thought that they could be lost to external manipulation.

This article was specialist edited by Jessica McLaren and copy edited by Sarah Neidler.