People from a nonfinancial background tend to assume the stock market is the largest financial market, quite plausible given the media attention it typically attracts. The bond market, however, is almost twice as large. A bond is a financial instrument made up of debt plus interest and is essentially an IOU. When people invest in company-issued bonds, the company is borrowing an amount of money from these people. The company later repays this amount to the investors when the bond has matured. Moreover, the borrower tends to pay periodic interest to the lenders, on top of the original amount borrowed, during the contract of the bond. The following diagram illustrates the typical cash flows of a bond between the borrower and the lender.

Bonds are ordinarily traded between individual market participants over the phone, without a traditional ‘exchange’ where orders can be placed and matched up on a first-come first-served basis, as is the case with stocks. For example, if I want to purchase a share in Microsoft, I can place a bid on an exchange to purchase one share at, say, a maximum price of £7. As soon as another market participant places an order to sell a share in Microsoft at this price, the two orders are matched up and the transaction is then executed. Such a market is transparent given that the order book containing every investors’ desired number of shares and their desired purchase or sell price is visible to everyone else.

However, unlike stocks, bonds are not traded in this way. Such a market would be dysfunctional and illiquid, meaning that buy and sell orders for individual bonds wouldn’t be matched together, and orders would be left open for too long. The reason for this can be explained by examining more closely the difference between a stock and a bond. A stock (or a share) represents the partial ownership of the company. Stocks can either be common or preferred, the primary difference being that when a company pays out dividends to shareholders, preferred shareholders are paid first. Additionally, in the event of a company going bust, preferred shareholders are paid out before common shareholders.

A stock, therefore, can either be common or preferred. It’s not quite that simple when it comes to bonds. Bonds can vary by issuer (ie. Who is issuing the bond to borrow money) such as government bonds, corporate bonds (companies) and municipal bonds (issued by the state). They can also differ by the investment grade which shows how risky it is perceived to be, hey can be issued in different currencies and the interest paid on them can differ in terms of the frequency at which it is paid and the interest rate which is paid. Moreover, the contract can mature at any point in the future, as decided by the borrower. Delving deeper, bonds can differ by the legal restrictions attached to the contract and can even have other financial instruments embedded within them. Put simply, they can vary massively and each single bond can have its own, unique idiosyncrasies. As a result, while stocks are very limited in what you can order (common or preferred), the likelihood of one investor’s purchase order for a specific bond being matched up to the exact sell order for the same bond is very low. In financial jargon, the market would be illiquid. Orders would not be matched up. This is underlined by two dizzying statistics. Firstly, there are only 43,000 stocks in the world, but there exist millions of different types of bonds. Secondly, over 90% of corporate bonds are traded less than 5 single times in a calendar year 1. As a result, bonds have traditionally been traded over the phone between individual investors who would negotiate the terms of the bonds with one another until an agreement is reached.

When a bond trader wants lunch, they can order it via an app on their smartphone and have it arrive at their desk. But when they want to buy a bond, they need to use a landline. Since as recently as January of this year, the market structure of bond trading has seen a marked change. Over the past few years, new platforms have been developed to allow for high-frequency, electronic trading of bonds, similar to what already exists for other financial instruments such as stocks and currencies.

TruMid is one of the most high-profile new entrants into the bond market. It is an electronic platform which designates different trading sessions throughout the day to specific types of bonds, in an attempt to improve market liquidity (ie. by having different times allocated to different types of bonds, there is more of a chance of buy and sell orders being matched up) 2. For example, Monday mornings could be specifically for bonds issued by companies in the technology sector, while Tuesday afternoons could be set aside for trading bonds of healthcare companies. Global investors have caught on to the platform: in January 2018, more than $2bn worth of bonds were traded on TruMid, more than double the amount traded in the same month a year prior 3. Moreover, it recorded its largest weekly volume of trades in February of this year, further accentuating the march of bond investors into electronic platforms.

Elsewhere, Alliance Bernstein, an investment group who handle over $500bn of assets, have developed a single algorithm which handles 35% of their bond trades. MarketAxess, another leading global electronic trading platform for bonds, has seen its trading volume triple since 2014 to over $150bn. Some estimates now believe almost one-fifth of all corporate bond trading takes place on electronic platforms 4. Another leading electronic bond trading platform, TradeWeb, owned by Thomson Reuters, revealed that its trading volumes of European corporate bonds in February of this year were almost 75% higher than a year earlier 5. 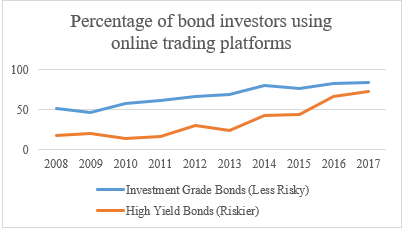 Yet some sceptics remain adamant that a full-scale switch to the digitisation of bond trading is not strictly feasible. This is underlined by the fact around 80% of bond trading is still carried out over the phone 6. A recent paper by the Bank for International Settlements estimated that around 85% of electronic transactions in bond trading were for trades of under $1m 7. Traders, therefore, only seem happy to process smaller bond trades; typically government bonds of less than $1m on platforms such as TruMid and MarketAxess. Larger bonds are harder to trade purely based on algorithmic platforms; they still require a human touch. One trader likened it to how a consumer is comfortable buying a television online, but not a house. Nevertheless, some see scope for slicing up larger corporate bond trades into smaller individual trades and selling them in smaller chunks, rather than phoning up a bank to sell them one huge chunk of debt.

The acceleration of electronic trading in the bond market reflects a wider shift in financial markets over the last decade or so. Stocks and government bonds, also known as ‘rates’ have been traded this way for years using algorithms, machine learning and artificial intelligence to turn data into successful trades. What’s more, the commodities market, where tangible goods such as oil, precious metals and gold are traded, is also turning to digitisation. Electronic trading volumes have increased by around 17% in oil and metals since 2013 8.

While technology and algorithmic trading is a mainstay in the majority of financial markets, it has yet to convince many bond traders who remain reluctant to process larger trades on an electronic platform. They fear they would be met with a lack of supply and the market would lack the necessary liquidity to match buyers and sellers of sizeable portions of debt. They also point to the vast heterogeneity of corporate bonds relative to other financial assets, such as stocks. While a single company typically has two types of stock, it can have a vast variety of different bonds which can differ in a multitude of ways. Finally, others are cautious of the market becoming fully electronic and being left prone to the technological glitches which have plagued the stock market in recent years 9.

Modernising bond markets is a small part of a wider, seismic shift in digitising financial markets. A recent JP Morgan study found that over 60% of traders surveyed would be interested in a mobile phone trading app, while other firms are continually looking at ways to use technology to more efficiently research possible investment opportunities. If these technologies catch on and prove a success, we can expect far less phone calls being made at bond trading desks.

This article was specialist edited by Brigita Pocyte and copy-edited by Kirsten Woollcott.

Paul is a first year PhD Student in Corporate Finance, having previously worked in Financial Technology and in Private Equity. Away from financial markets, he enjoys playing football and golf and reading anything by John Grisham.