Science fiction is all about using cinema, TV, books and comics to make the seemingly impossible possible. It may seem ridiculous to believe that in the near future you will be able to enter people’s dreams to steal their secrets or see a fully functional time machine made out of a DeLorean. In fact, the sheer ludicrousness of a man in blue tights that can fly faster than a speeding bullet is enough to put some people off the genre of science fiction altogether.
However, what if I told you the seemingly impossible was on the verge of becoming possible? A handful of scientists are dedicating their careers to turning sci-fi into science. Want to know how to read minds or use telekinesis? Well, look no further; science has the answer!

Telekinesis/Cyberkinesis
Kevin Warwick is professor of Cybernetics at the University of Reading. For over 10 years, he has been combining engineering with neuroscience to enable people to “communicate” with technology. So far his team has accomplished an impressive array of feats: from clasping your hand to switch on a light to controlling a robotic arm remotely over the internet by simply moving your own. To be able to achieve this, researchers needed to have an understanding of how movement is controlled by the brain. 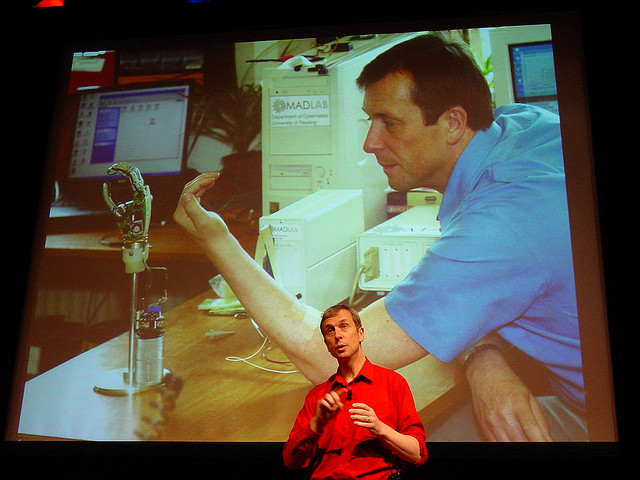 Movement involves many different motor areas in the brain. However, one key region of the brain involved in this is the primary motor cortex 1. When different sections of this part of the brain are active, different muscles in the body can be made to move. For example, when you intend to move your hand in a particular way, a specific set of brain cells, or neurons, in the primary motor cortex will become active. These neurons send electrical signals through the brain which are then modified and refined by other areas, such as the basal ganglia and cerebellum. These electrical signals are passed down through the spinal cord and out to the muscles of your hand, at which point your hand will move. For complex movements of the hand, a specific pattern of signals will travel down your arm to specific muscles surrounding the hand. What Kevin Warwick and his team aim to do is to record these electrical signals and to match different patterns of signals to the hand movements that they produce 2. Once they “decode” the signals from the nerves in the hand, they store this information in a computer.
By inserting a micro-array of electrodes into his arm, Professor Warwick allowed a computer to remotely record the electrical activity passing down his nerves to his hand. The computer was then able to classify what movement this pattern of signals would produce. From this, the computer managed to control a robotic hand, so that it moved in the same way as Professor Warwick’s hand. Using the same process, the signals recorded from neurons in the arm can be interpreted by the computer in many different ways. For example, if you clasp your hand, the computer can be made to perceive this signal as a command to turn off a light or turn on the TV. 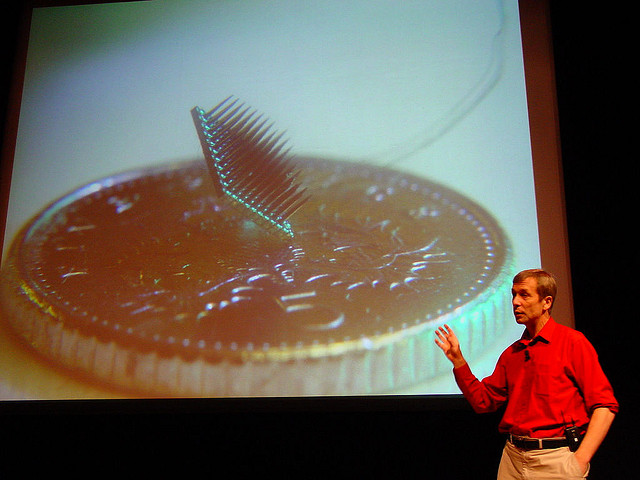 Micro array that would be inserted into the arm
Image Credit: Erwin Boogert via Flickr ( License )

While it would be amazing to change the channel on your television without lifting a finger, this type of research is mostly aimed at those who suffer from debilitating illnesses like tetraplegia. Microarray devices have been made available commercially, and can be inserted into the brain’s motor cortex 34.This means that if a patient thinks about moving their arm, even if they can’t physically move it due to their illness, a robotic arm can move in the same way as their own arm would, simply because they will it to do so.
So by willing an electronic device to move or switch on, with a little help from a computer and an implanted microarray, it is now possible to move things with our minds.

Reading minds
Do you want to know what others are thinking? Well, it is not too difficult to find out- all you need is the right equipment. If you are a fan of any TV medical drama, you will likely have heard of patients being sent for an “MRI”- a procedure where the structure of the patient’s brain is detected by a magnetic resonance imaging (MRI) scanner. However, you may not have heard of another form of brain imaging: functional MRI (fMRI). Instead of showing a static image of the structures in your brain, an fMRI scan will tell you something else- which neurons in the brain are active when you’re performing a particular task.
fMRI works by tracking how oxygenated blood is in different parts of your brain 5 . Active areas of the brain need extra oxygen. They can get oxygen from the blood, where it is joined to a protein called haemoglobin to make oxyhaemoglobin. Therefore, these active areas have more blood that is rich in oxyhaemoglobin. Due to the magnetic properties of oxyhaemoglobin, its presence can be detected by a large magnet. So when an area of your brain is active, say you are playing tennis, a distinct pattern of active brain regions will emerge after the data from the scan has been analysed. If you are indeed playing tennis, activity will be seen in regions of the brain, such as the supplementary motor area, the primary motor cortex, the basal ganglia and cerebellum.
So now we know how to see which parts of the brain are active, but what does this tell us about what we are thinking? Dr Adrian Owen has been applying fMRI to patients who are in a coma, to test whether they can hear and understand what people around them are saying 6. By asking patients to imagine playing tennis and analysing which areas of the brain become active using fMRI, Dr Owen can tell whether the coma patients are responding to his request or not, i.e. whether they are, in fact, imagining playing tennis. However, this procedure must be carried out several times to ensure that the activity in the patient’s brain did not occur by chance, but that the patient truly understands what the researcher is asking them to do. Once it has been established that the patient understands the researcher, they can be asked yes/no questions. For example, if the answer is yes, they can respond by imagining playing tennis, which will be picked up by the fMRI. 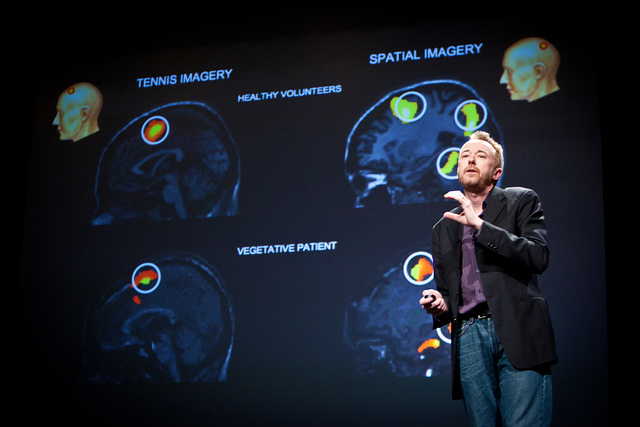 Although we are a long way off simply being able to suddenly hear an echoing voice in our head of what the stranger standing next to us is thinking, we are considerably closer to being able to “ read minds” using technology. Even for those who are unable to communicate in the usual ways, we are able to tell what they are thinking.

So you didn’t believe reading minds or turning machines on with thought-power was possible? Well, think again. Research is continually turning science-fiction into reality.