The new world of giant viruses

We all have an idea of what viruses are; not the malicious programs that infect our laptops, but the infectious agents that cause diseases like Ebola or the flu. These biological viruses are generally smaller than bacteria, consisting of a small amount of genetic material (DNA or RNA) and an outer shell of proteins, the capsid. However, whether or not they are living organisms is a source of controversy. On one hand viruses undergo multiplication and mutation, which could indicate they are alive; on the other they are non-cellular and must infect a living host cell in order to reproduce, suggesting they are not. Viruses can infect plants, animals, humans and even bacteria (bacteriophages), often causing severe diseases such as rabies or AIDS. This actually gives them an important role in the environment; for example, bacteriophages are a major controller of bacterial populations in marine ecosystems. However, in the past decade giant viruses have been identified, and these are challenging our standard view of viruses. 1 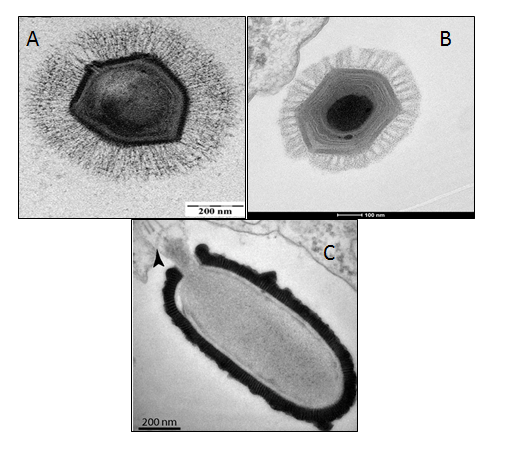 Giant viruses are comparable to many small bacteria in terms of physical and genome size, being at least three times bigger than traditional viruses. They also have a number of features absent in their smaller kin, including the presence of several genes previously only seen in bacteria or eukaryotes (organisms with cells containing a nucleus and other organelles enclosed within membranes). Contrary to what we may conclude from their recent discovery, these giant viruses are in fact both diverse and abundant in the environment, with many different kinds having already been found. Their late discovery is mostly explained by the approach previously used to identify viruses, which relied on passing fluids through a filter with pores only 200 nanometres (nm: millionths of a millimetre) in diameter—too small for the giant viruses to pass through. Also, as they were so much bigger and different from “normal” viruses they were originally thought to be bacteria, until researchers started using new analytical techniques to investigate them, such as genome sequencing.

Mimivirus 2, which stands for microbe mimicking virus, was the first giant virus to be identified. Initially isolated from a cooling tower at Bradford hospital in 1992 along with its host (the amoeba Acanthamoeba, a unicellular shape-shifting organism), this giant virus was mistakenly considered a bacterium until 2003, when its true nature was discovered. It is an icosahedral (20 faces) virus coated in glycoprotein fibres that resemble long hair and a huge diameter of around 400 nm, making it about four times bigger than HIV. This virus has a double-stranded DNA genome containing 911 genes, while the number for a “normal” virus is about 10 genes. This massive genome codes for about 979 proteins, many of these do not exist in other viruses. The infectious cycle of Mimivirus, and most other giant viruses, starts by phagocytosis, where the host cell engulfs the virus and sequesters it in an internal structure called a vesicle. The virus then penetrates the infected cell, and a stargate channel opens in the viral capsid. This star shaped structure forms a channel between the virus particle and the host’s cytoplasm, allowing it to develop a viral factory within the cell where new viruses are assembled, before being released by the breaking down, or lysis, of the cell.
Another giant virus is Megavirus chilensis, isolated in 2010 3 from coastal seawater in Chile. While it has a similar shape to Mimivirus it is even more complex and bigger, with a diameter of 440nm. Megavirus has a slightly larger genome than that of Mimivirus and codes for 1120 proteins. It also has glycoprotein “hair” on its surface, but shorter than those on Mimivirus, making it look like a bacteria and tricking amoeba into eating it. This gives the giant virus access to a host cell that it can turn into a viral replicating factory. Half of Megavirus’ thousand genes are also found in Mimivirus, as the two giant viruses belong to the Mimiviridae family, for example the genes coding for the translation system (part of the protein making process) are in both viruses, but Megavirus has at least three additional enzymes that make sure the genetic code is respected in the translation. The other half of the genes present in Megavirus are unknown and unlike anything found in any other organisms so far.

Pandoraviridae is a different family of giant viruses that was published in 2013 4, however, it is very different from the Mimiviridae. There are two members in the family: Pandoravirus dulcis was discovered in Australia, and Pandoravirus salinus in Chilean waters. They have the shape of an amphora (a Greek vase), and measure around one micrometre (µm, or micron: 0.001mm) long and 500 nm in diameter. The genome of Pandoravirus contains 2500 genes, which is 10% of the number of genes in humans. Among their numerous genes, 93% are mysterious as they are not found in any other virus or cellular organism. The amphora-like shape of this virus and its mysterious genome that does not correspond to anything known, led to its name, which refers to Pandora’s Box (a large jar in the original Greek myth).
The most recently discovered giant virus is Pithovirus Sibericum, which was found in the Siberian permafrost in 2014 5. This virus survived being frozen for 30,000 years and was perfectly viable upon defrosting. Similar to Pandoravirus, Pithovirus it has the shape of an amphora sealed at one end with a cork. However, while it is larger than Pandoravirus, measuring 1.5 microns long and 500 nm in diameter, it only possesses around 500 genes. Combined with the fact that the two groups only share one or two proteins in common, there appears to be no genetic link between Pithovirus and the previous families of giant viruses. 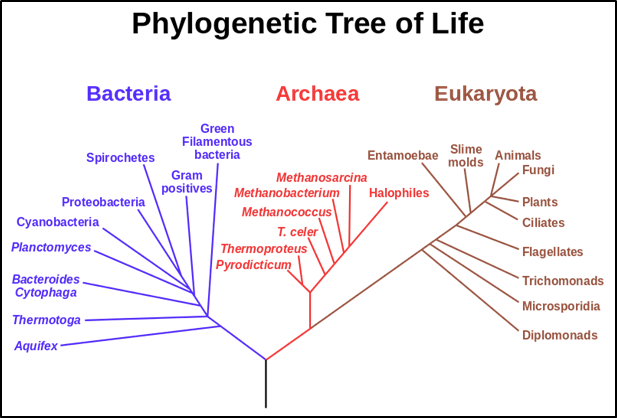 A tree of life showing the domains Bacteria, Archaea and Eukaryota with the universal common ancestor LUCA (black trunk at the bottom). Image via Wikipedia, from the NASA Astrobiology Institute.

From the giant viruses, many questions have been raised, especially about their origin. Was their ancestor a cellular organism that progressively evolved through reductive evolution, losing functions that could be achieved by their hosts, or did giant viruses evolve from a smaller “normal” virus, getting bigger by acquiring genes obtained from their hosts? It has also been proposed that giant viruses, along with other nucleocytoplasmic large DNA viruses (NCLDVs), might define a fourth domain of life which could only survive by parasitizing organisms, distinct from Archaea, Bacteria, and Eukarya, and that they have a common ancestor that appeared even before the last universal common ancestor, the organism from which all life on earth descended. 6
Moreover, giant viruses also challenge the idea of viruses being alive.This is because they share something in common with living cells not seen with “normal” viruses—giant viruses can also be infected by viruses, the so called virophages. Sputnik 7 is a virophage that infects Mamavirus, which is slightly larger than Mimivirus, infecting the viral factory and hijacking the machinery of Mamavirus in order to replicate, making Mamavirus less effective.
Another concern raised by the giant virus is about the danger they present to humans. For instance, a study in 2013 8 has shown that there is a link between the presence of Mimivirus in patients with pneumonia, as the virus was isolated in a human sample from a 72-year-old woman suffering from the condition. However, it appears that giant viruses are extremely abundant in the world, in water, in the soil, and for the moment it does not seem like they pose a threat to humans.

The recently discovered giant viruses have brought with them many questions and challenges launching at the same time a lot of debates about the origins of life and the very definition of viruses. 9

This article was specialist edited by James D. Burgon and copy edited by Rebecca Laidlaw.

Chloé is in her second year, studying Microbiology. From the South of France, she’ misses her beloved sun, but got used to the rain and enjoys life in Scotland.