A Game of Hide-And-Seek: The Search For Ebola’s Animal Past

The structure of the Ebola virus under stained under microscope. Image by Cynthia Goldsmith.

On first sight Meliandou is like any other rural Guinean village.  Six hundred miles from the capital, Conakry, the town hosts around 400 residents and 31 dwellings, But looks can be deceptive, and Meliandou’s humble image is a façade for a series of fatal events.  Locals have told researchers stories of the traumatic death of a two-year-old boy, Emilie Ouamouno who died last year.  He had mysteriously fallen ill with a fever, vomiting and black stools.  Subsequently, his mother, sister and grandmother all died after showing the same symptoms, spreading fear throughout Meliandou.  The fear of the fatal disease, later identified as the haemorrhagic virus, Ebola, would then spread through the country and the rest of the world.  The search for the source of the outbreak was narrowed down onto one hollow tree, presumed to contain a bat colony.  The significance of this detail only became apparent months after Emilie’s death, when scientists set out to find the source of Emilie’s Ebola infection.

When Emilie fell ill, nobody spoke of Ebola yet.  The symptoms that Emilie and his family experienced were common to an array of other debilitating diseases like malaria, yellow fever, cholera and typhoid. Only after the disease had infected people outside Meliandou, the term Ebola was used. Decrepit national healthcare systems were not prepared to deal with the unknown contagion.  International research 1 finally identified the disease as the extremely lethal haemorrhagic virus, Ebola.  In the past this disease had been confined to small outbreaks in the Democratic Republic of Congo (DRC), but an epidemic of the scale seen in West Africa was unprecedented.  Recognising which virus was responsible for the increasing numbers of sick people and deaths was only the start.  Understanding how the virus works and where it initially came from were the next step to explaining this fatal outbreak. 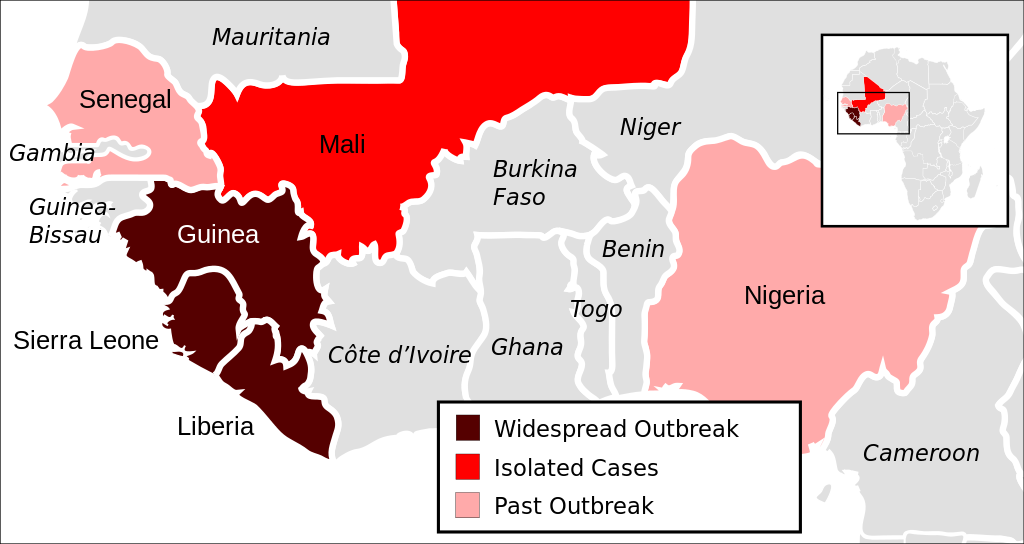 The outbreak of Ebola and the African countries fighting the virus. Via wikimedia commons (CC0 1.0)

Ebola infections are often fatal and the high death rate is caused by its haemorrhagic nature.   Ebola, like other viruses, needs living cells to replicate, hijacking its “machinery” to produce multiple copies of itself.  Ebola attacks every organ in the body except bone and muscle tissues, making it different from other viruses that only attack one or two cell types.  This is why it is so deadly and symptoms lead to multiple organ failure.  The Ebola virus is spreads through close contact with bodily fluids from patients  2. Most of the Ebola deaths in the current epidemic have been concentrated in Guinea, Liberia and Sierra Leone where there is a  lack of qualified medical personnel. Also, Ebola had never been seen in West Africa meaning that medical professionals were unprepared for such an outbreak.  Consequently, these countries are estimated to have suffered 27,929 confirmed cases of infection and 11,283 confirmed deaths 3, resulting in an estimated death rate of 40 percent.  This seems like a massive number of deaths, but it is actually lower than some earlier outbreaks which yielded a frightening 4, showing just how deadly the Ebola virus can be.  While human-human transmission of Ebola is well documented, there is one aspect of the disease that is surrounded in mystery: the source of the initial human infection. 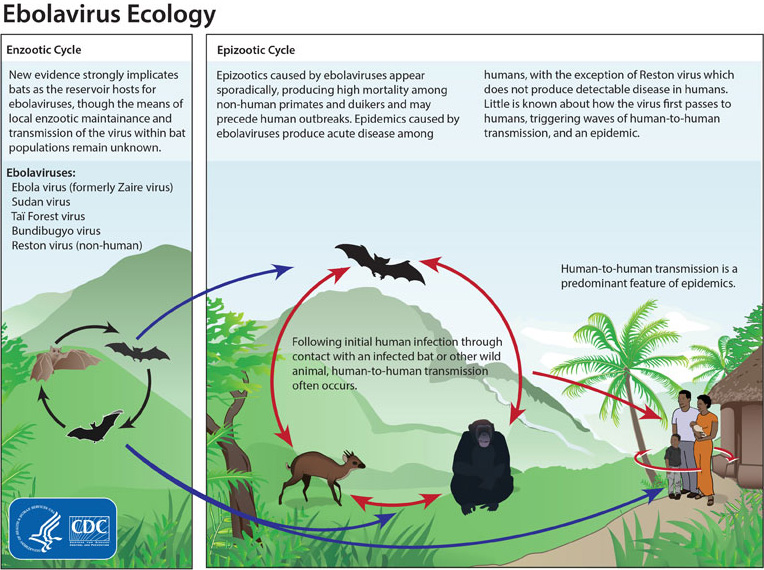 A diagrammatic overview of Ebola transmission, showing bats interaction with other animals and humans. Image from the CDC, via wikimedia commons.

Ebola has long been known to be a zoonotic disease, meaning that the virus jumps over from animals to humans. The animal-human transmission is known as a spill-over event.  But exactly which animals infect humans, and how, is still in question.  An initial suspicion was that ‘patient zero’ (Emilie from Meliandou) may have been infected by eating contaminated bush meat.  Primates like chimpanzees, gorillas and macaques are the only other proven animal to exhibit symptoms when naturally infected with Ebola and are hunted by humans.  Cooked meat carries no risk if eaten, although handling raw contaminated meat increases chance of infection.  In Emilie’s case, if the local primates had been experiencing an Ebola pandemic, populations would have fallen and bush hunters would have been the first infected.  But, investigations found 5 that neither of these occurrences were the case.  How one boy from Meliandou caused an epidemic was proving to be a mystery. Researchers were left with one last suspect – bats. 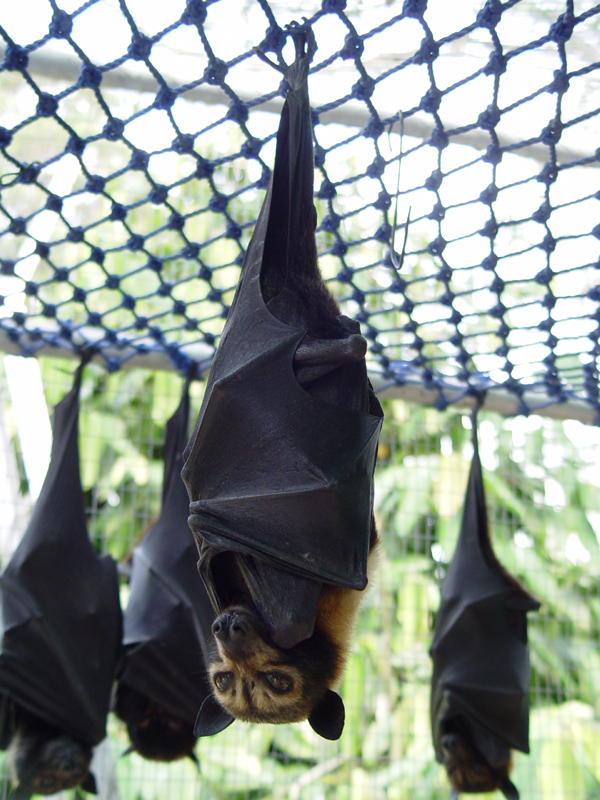 The Speckled Flying-Fox, a large Australian meg-bat. African relatives are suspected of being the Ebola reservoir. Image via wikimedia commons (CC BY-SA 3.0)

For years, researchers have been hunting for the Ebola virus “reservoir”- the animal where the virus hides and can dwell without causing symptoms, waiting to turn deadly at a spill-over.  In 2005, 6, sampled 679 bats, 222 birds and 129 small vertebrates to find the elusive Ebola reservoir.  The scientists found that 7, immunoglobin G (IgG), against Ebola indicating infection with the virus.  Bats are held accountable for being reservoirs for many other diseases; they have a high body temperature which may act like a 8.  This “bat hypothesis” is supported by DNA evidence taken from Emilie’s hollow tree suggesting that a small, insectivore bat known as the Anglian free-tailed bat (mops condylurus) lived here.  These bats had been known to contain antibodies against Ebola.  However, in order to conclude that it was the secretive reservoir, the only definitive proof would be viral RNA..  Events surrounding Emilie are still speculative but with current knowledge, it is a very logical theory.  If scientists finally manage to pinpoint the reservoir of Ebola, we may be able to limit new spill-overs and identify communities that are at an increased risk.

Scientists are still working on definitively solving the Ebola spill-over conundrum, while an end to the current Ebola epidemic is finally within reach.  The UN recently announced that this Ebola epidemic could be 9.  To defeat Ebola in the long-term  a method for preventing future outbreaks is needed.  Identifying the natural reservoir of the virus is one step that will enable us to further monitor and control outbreaks of this frightening disease, preventing children like Emilie from suffering an equally painful fate.

This article was specialist edited by Michaela Mrschtik and copy edited by Rebecca Baird.