Being Vulcan Among Humans 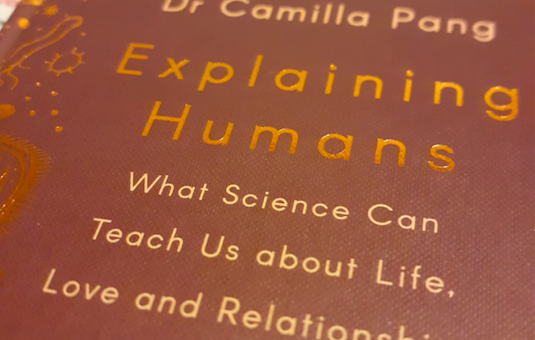 Camilla Pang is 27 and has autism spectrum disorder (ASD) and attention deficit hyperactivity disorder (ADHD). She also has a PhD in Biochemistry from University College London, and became the youngest person to win the Royal Society Insight Investment Science Book Prize1 for Explaining Humans: What Science Can Teach Us about Life, Love and Relationships in 2020.

Growing up, Pang was often confused by the rules for human behaviour but she understood and loved science. She was also adept at seeing patterns and connections, which she used to her advantage to make analogies between what she knew from science and things she found confusing or difficult.

I am also 27, and like Pang, there were many things I found confusing growing up, or that I found difficult compared to my peers. Whilst I was good at most of my lessons in school, I tended to feel disconnected from my classmates and was unsure of how to act around them. However, I was always interested in finding out how things worked, and I definitely identify with Pang’s words when she states “although I may not understand why someone thinks and behaves a certain way, you’d better believe I am watching closely and trying to figure it out”.

I similarly searched for analogies to help me understand humans. Specifically, I found parallels in the world of animal behaviour in a kind of reverse anthropomorphism. Rather than imposing human traits on our animal cousins, I considered how our behaviour reflected theirs. How does our biology explain actions and responses that seem otherwise irrational?

As I grew older, I learned how to socialise although often preferred my own company. I struggled with my mental health, often due to a tendency towards extreme perfectionism. It is only recently that I’ve recognised these traits as signs of ASD and been referred for a diagnostic assessment. This isn’t particularly unusual; autistic women and girls are often not diagnosed until much later in life compared to their male counterparts. There isn’t a clear explanation for this, but suggested factors include a diagnostic model based mainly on male autistic individuals and a tendency for females to be better at “masking” autistic traits such as difficulty socialising.2

Aspects of Pang’s experience reflected my own, from confusion at people’s contradictory or illogical behaviour to turning to books and science to figure it out. But we are also all individuals, and whereas Pang admits “reading fiction actually makes me afraid”, it provides me with an escape and has helped to deepen my understanding of people’s actions and motives.

As a teenager I enjoyed watching Star Trek, especially the Voyager and The Next Generation (TNG) series. In particular, I related to the character of Commander Data, an android who was always trying to understand what it meant to be human; I respected his logical approach to problems, and his eagerness to learn and constantly improve himself.

Star Trek became one of my main loves as I grew up. The Vulcans fascinated me, especially after watching the TNG episode “Sarek” [Series 3], in which it is mentioned that rather than not having emotions, “Vulcan emotions are extremely intense”; they have simply learned to control them. Without mental training, they are affected by their emotions far more strongly than even humans. 3

Logic is likened to a Vulcan “superpower”, but can frequently lead to them being regarded as blunt. I already saw similarities to Vulcans in my own character. My logical thinking was something I deeply valued, but I also knew there were certain things that could make me extremely frustrated, or incredibly unhappy, that other people seemed to cope with easily. At times I hated the illogical nature of my own emotions, not knowing where they sprang from or what I was supposed to do with them.

So I did what any good Vulcan would do, and tried to factor the underlying causes of emotion into some kind of logical algorithm.

For this I needed more data, and I read everything I could to understand more. In this way, I have much in common with Pang and many things she writes about in Explaining Humans were both fascinating and helpful to me.

At different points, Pang uses machine learning, biochemistry, physics, and statistics to describe or explain various human behaviours while simultaneously demonstrating the core science – I probably understand proteins a little better after comparing them to different human personality types. One example concerning perfectionism uses the second law of thermodynamics, as a reminder that the universe’s tendency towards disorder is always going to be working against the order we crave, so we have to learn to make compromises.

The most useful thing I will take away from Explaining Humans is the analogy of gradient descent algorithms – a type of optimisation calculation used in machine learning4 – as a way to think differently about setting and achieving your goals. Gradient descent algorithms are compared to finding your way down a mountain in thick fog. You don’t need to be able to see the end right now, or the whole path there; you just need to look around you and determine the next best step to take you closer to the end goal, and you will get there eventually.
Explaining Humans comes with a good reminder that thinking deeper about how we interact isn’t just useful for those like me who don’t naturally warm to it. Pang states “I was someone who had to learn people and human behaviour as a foreign language. By doing so, I have recognised that those who claim to be fluent have gaps in their vocabulary and understanding, too”. Perhaps if we all had a better understanding of the science behind our behaviour, we might get along better as a species.

Jen Allerton is completing a degree in Natural Sciences with Open University. She writes about mental health, as well as anything interesting she hears about in science, and the intersection of science and society. She also enjoys playing rugby and cricket, and buying more books than she can physically read.