No, I’m not fighting to bring back Pluto. I’m talking about new evidence to come out of Caltech for a mysterious “Planet X.” The theory goes like this: there may be a planet-like object about the size of Neptune that orbits the Sun every 10,000-20,000 years. So far, it has never been seen and, if it does exist, it would have been knocked out of the planet-forming region when the Solar System was very young.

However, over the years, many claims have been made about such a planet. An unfortunate number of these claims stretch the definition of science, and so the scientific community is maintaining a healthy scepticism towards the most recent claims1.

The claim is being made because of a cluster of known objects that orbit beyond Neptune. The modelling and observations suggest that these objects would probably only cluster in this way due to gravitational fields caused by something such as Planet X, which may have shepherded the smaller objects into this cluster. There is only a 0.007% chance (or one in 15,000) that it could just be a coincidence. 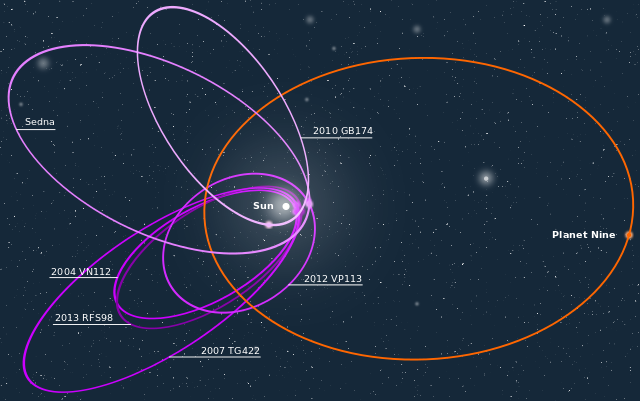 Now, that may sound impressive, but it takes a lot to convince scientists. The Higgs Boson wasn’t considered to be “discovered” until the chances of a coincidence we one in 3.5 million. So the findings are interesting for now, but there’s certainly still the possibility that it may indeed just be a coincidence. However, if the planet is real, other disturbances of other objects in the solar system should be detectable. No doubt the lure of finding a new planet will bring astronomers to the hunt soon enough.