The single-pixel camera – in what way is it a step forward from cameras with millions of pixels? Would you want it in your next smartphone?

Scientists from the University of Glasgow’s Optics group are challenging expensive cameras, which have millions of pixels, with their new, affordable, single-pixel camera.

As part of Glasgow Science Festival and the International Year of Light 2015, The Hunterian Museum at the University of Glasgow played host to an exhibition of this new technology. On the 13th of June, Baoqing Sun from the Optics group gave a tour and discussed the group’s work with the public.

Instead of using millions of pixels, the single-pixel camera works by using crossword-like patterns to mask and illuminate different parts of the sensor, while detecting the backscattered light. This process is done thousands of times with different patterns to capture a complete, good-resolution picture, where the resolution depends on the complexity of the patterns. However, this process almost works in real-time.

To capture a two-dimensional (2D) full-colour image, three single-pixel detectors must be used. Each detects one of the three additive fundamental colours: red, green or blue. The computational image construction then utilises information about the detected intensity of the light and the patterns used to create the full-colour image within a few seconds. 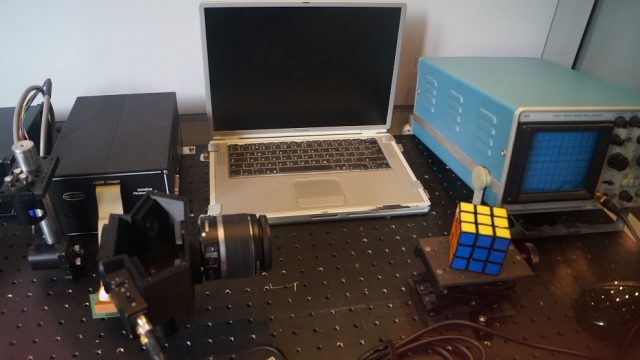 A single-pixel camera being used to photograph a Rubik’s Cube.

The researchers were also successful in creating three-dimensional (3D) images, using 4 single-pixel cameras to detect the light intensity from the same perspective, but different directions. The images from the cameras are then combined incorporating a “shape from shade” technique with plenty of mathematics to create the 3D image.

The single-pixel camera can also be used to take photographs in the infrared (IR) and the ultraviolet (UV) regions using different sensors, and is an extremely affordable method in doing so compared to regular IR and UV detectors. For this reason, single-pixel cameras have a great potential for medical and scientific applications such as medical diagnostics, IR microscopy, night vision and seeing through smoke.

In short, even though single-pixel cameras are not efficient enough to make an appearance in mobile phones, they provide a novel method to create inexpensive 3D cameras as well as IR and UV detectors to be used in medicine and research.

If you missed this exciting new technology at the Glasgow Science Festival, there is still plenty of time to visit the exhibition as it is staying in the Hunterian until the 27th of September!

To see an example of an image taken with a single-pixel camera, read this paper by Welsh et al.

Hsnee is an astrophysics undergraduate student at the University of Glasgow. He is interested in gravitational research and studying the early universe.