‘Potential Difference’, an exhibition about Women in Science

I’m a PhD student in Biology at the University of Edinburgh and I’m really enjoying it, so I’d like to stay in academia. However, it appears to be harder for women to stay in academia – or at least as figure 3 shows many of them drop out!

The reasons for this have been explored and it boils down to many factors, including biological or cultural aspects. In addition, women often do not fit preconceived notions of the scientist, who is “usually” male, white and balding.

In response we decided to stage an exhibition that documents female scientists that conduct ground-breaking research at Edinburgh University. We hope that our exhibition will create visible role models for future generations of scientists. 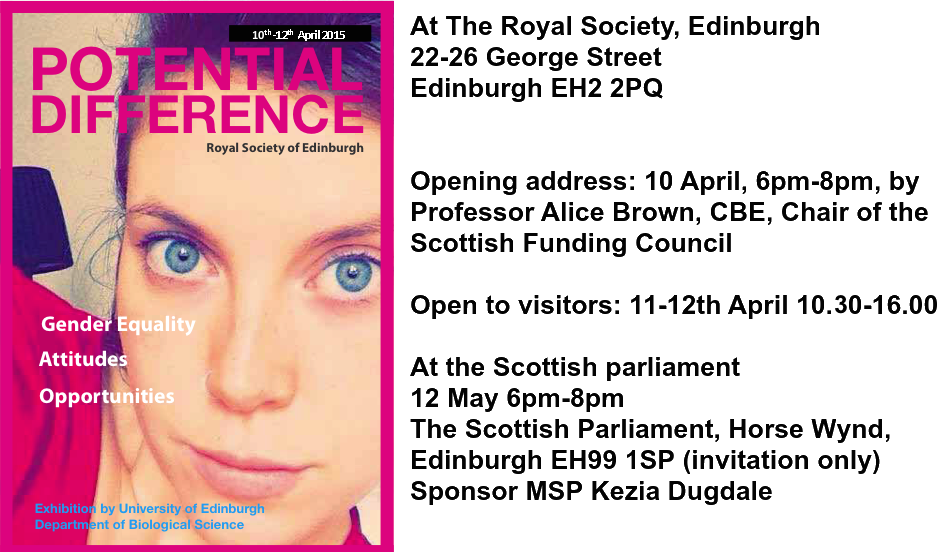 Our team and many others who helped us went round the School of Biological Science at Edinburgh University to photograph all the female scientists we could find. These photos were collated to form an impressive “wall of talent.”

We also interviewed some brilliant female scientists across career stages and a professional photographer took amazing photos of them. The photographs alongside their interviews and visualization of their research will be displayed, and figure 2 for some sample photographs and sample quotes. In addition Hamer Dodds, the artist on the team created some more exciting exhibits that challenge our conceptions of science and gender.

Most women we interviewed had not experienced explicit sexism. Rather, they were aware of more subtle but widespread bias in both academia and the research funding systems that make it difficult for women to reach the top levels. Some of the interviewed scientists see cultural reasons that are not unique to science but are apparent in society as a whole – for instance women still do the majority of the childcare. While the interviewed scientists saw problems in the system, they also pointed out that there are opportunities and women should be more confident to take them. The excitement to do science was very obviously the main motivation for them to stay in academia. Some had experienced excellent mentoring that helped their career progression or had been inspired by teachers or scientists. None of the women had planned their careers out; rather, they took the most suitable opportunities at each career step.

We called the exhibition ‘Potential Difference’ because we think with more women in science, the potential of science will be higher than if it stays as male-dominated as it is. The project is funded by an ISSF Wellcome Trust grant awarded to Dr Karen Halliday. 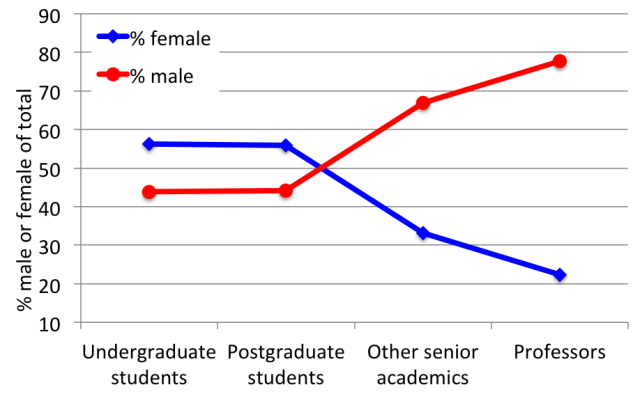 The diagram above illustrates the issue. This is the so-called scissors diagram, made from 2013/14 UK wide data from the Higher Education Statistics Agency. While more than half of the undergraduate students are female, the percentage of women in academia drops with rising rank, such that 4 out of 5 professors are men.

There are several reasons for this effect, and neither women losing interest in science nor poor grades are to blame. However, gender bias is a real feature, as shown in a research article by Moss-Racusin et al. (2012). In this study faculty members were sent CVs that were completely identical except that they had either male or female first names. The experiment revealed that there is a bias against women, for employing the male scientist in spite of equal qualifications. This relatively small bias, when applied at the many stages of the scientific career system, amount to a big difference at the top levels.

Some women wind down academically when considering to start a family and therefore become less ambitious.

Missing female role models are probably part of the problem as well – ‘if you can’t see it you can’t be it’. We hope that this exhibition helps to create female scientist role models.

It is not only women who want to do science who will benefit from more participation of women in science. It is also science as a whole: If you sample the best people from two equally qualified groups of people you will end up with a better group of people than when you only sample out of one group. In addition, women may on average approach some scientific questions differently, communicate differently in a team, interact differently with colleagues. We already know that diversity of ideas and opinions is very beneficial to science and its working climate.

The exhibition was initiated by Dr Karen Halliday and Dr Meriem El Karoui, both group leaders at the School of Biological Sciences at the University of Edinburgh. We work together with the photographer Heshani Sothiraj Eddleston, the artist Hamer Dodds and the graphic designer Graham Russell. A student / postdoc organizing committee (Sreerekha Pillai, Dr Kathryn Topham and Johanna Krahmer) conducted the interviews and organized the photography sessions. Many PhD students across the School helped us taking pictures, and we are very thankful because we could not have done all this without them!

More information can be found here.

Johanna is a 3rd year Biology PhD student at the University of Edinburgh. Her PhD project is about circadian timing in plants.