In our recent print issue, we introduced an interesting new addition to our cuisine: bugs. Timothy Revell proposed that we should get used to the idea of including insects in our diet as they are very nutritious, it is ethical in terms of both environmental sustainability and animal welfare, plus they are already consumed by around two billion people around the world. If you want to find out more, check out Timothy’s full article here. Now, I feel quite convinced by these arguments, but how exactly do I get started?

A thorough search online yields limited options of insects prepared for human consumption. There are a host of websites that sell insects for humans, but these tend to be dehydrated and mostly marketed as fun novelty foods that you and your friends might dare each other to eat. But this approach is never going to convince people to make insects a part of their diet. Firstly, this preparation does not make the bugs particularly flavourful – they have a crunchy texture and mild flavour, neither offensive nor hugely enjoyable. Secondly, a foodstuff marketed as a challenge does little to convince the consumer that this is something they will enjoy eating, which is a pretty important part of choosing your dinner.

To get hold of fresh insects locally, the best option seems to be the local pet shop. I decided to use some of my friends as guinea-pigs and ordered an abundance of different species from a pet supplier. I set up a little farm for my mini-livestock where I could feed them on fresh fruit and veg in a clean environment for a few days, before preparing them as food. We had a feast of cricket tacos, a salad scattered with baked waxworms, beer-battered locusts served with lime and chilli, a mealworm stir-fry and had ice-cream topped with mealworms for dessert. An important facet of this event was that many of the people present were not sure that they would go through with eating any of the dishes; they mostly came along out of curiosity. Yet not only did everybody give it a go, they all genuinely enjoyed at least some of the dishes.

The dishes that we prepared were inspired by recipes from countries where people already eat insects regularly. In Thailand people are particularly enthusiastic about insects as food. Schoolchildren bring bags of live crickets to school which are simply fried, seasoned with soy sauce and a handful of other ingredients; the kids gobble them down in delight. Another popular dish in Thailand is weaver ant eggs stir-fried with lemongrass, chilli, garlic and fish sauce – this is considered a real treat, as the ant eggs are a costly seasonal ingredient. In Mexico, a classic snack is chapulines – a type of grasshopper that is fried and seasoned with lime and chilli, either eaten straight out of a paper bag or sometimes in tacos. All of these delicious seasonings and fresh ingredients make these dishes enormously more appetising than a vacuum pack of dried exoskeletons, and I love the idea of adding some exciting but tasty variety to the menu. 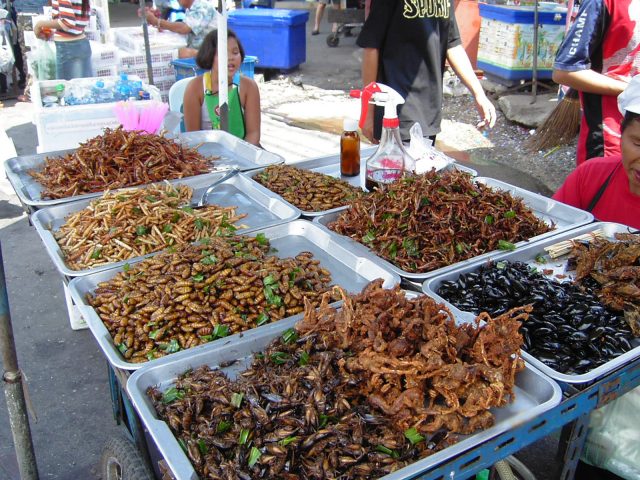 Many meat eaters prefer to be detached from the reality of where their food comes from, even when eating common sources of protein such as beef or chicken. So why not do the same with bugs? Chicken nuggets and scampi are fairly anonymous forms of animal protein, so a similar approach may work just as well with cockroach nuggets or scorpion scampi, for example. Belgium has recently taken a big step in starting to sell schnitzel made of insect protein in several supermarkets. At the extreme end of the anonymous food scale, many insects can be dried and ground into flour, which can then be incorporated into food as a source of additional protein and vitamins, without altering the flavour or texture. There are a few companies now incorporating cricket flour into high energy protein bars, an easy introduction for the entomophagic novice.

Getting hold of fresh insects for dinner, however, is not straightforward. Not only do you need to get them from pet shops, they are also pretty pricey when bought like this. Of even greater concern is the legislation surrounding entomophagy. This is primarily because of an oversight in the wording of the Novel Food Regulation of 1997, putting insects into a state of legislative limbo. The Novel Food Regulation defines novel food as anything that has not been regularly consumed in Europe before 1997, including genetically modified organisms and the use of nanotechnology. Committee approval is required for new products before they can be marketed in Europe. This regulation oversight is being rectified and once this has been done insect species currently being marketed as food will no longer be permitted until they have undergone a full safety assessment, unless it can be demonstrated that they have been consumed to a significant degree prior to 1997. This would be an additional hurdle to insects being adopted as food in the UK, just as the bug-eating movement is starting to gather momentum. TEDtalks by Marcel Dicke and Emma Bryce have over one million views each, and a flurry of organisations such as Bugs for Life, have been introducing us to insects as food at public events. In the press, entomophagy has received increasing attention over recent years. Nearly 40% of scientific publications on Web of Science having been published in the last two years* and entomophagy has also recieved coverage in mainstream press such as in the BBC and National Geographic. Most exciting of all, there are now several new insect-themed restaurants starting up such as Grub Kitchen, a bug barbecue in Pembrokeshire, and Hot Buzz in London, where you can get freshly prepared insect dishes inspired by international cuisine.

Whether you fancy rearing your own, or would rather hand over control to an expert, I recommend giving fresh insects a go. Just like any other ingredient, they deserve considerate preparation and well-chosen recipes. I hope that as more people try insects like this and enjoy them, they may then become more widely adopted into our menus in the near future.

Laura Allen is a PhD student at the University of Glasgow, researching tropical ecology and conservation.