Going Sour: A New Explanation for the Mass Dino Death

The undying mystery of the Cretaceous-Paleogene mass extinction – the one where the dinosaurs famously perished – has gained another plot-thickening twist. A Japanese research team now claims to have shown that acid rain, with a horrifyingly low pH of 0-1 (that would be more acidic than the gastric acid in your stomach), could be a major factor 1.

One of the main hypotheses of what exactly happened in those fateful years* is that, first and foremost, an asteroid of 10km diameter hit Earth. The suggestive evidence for this is all over our planet where geological records of the period reveal iridium, a metal rarely found in the Earth’s crust but common in asteroids –and of course a giant buried crater in Mexico 2. But how does a large asteroid hitting Earth end up killing three-quarters of animal and plant life, including all non-avian (non-flying) dinosaurs, around the world? 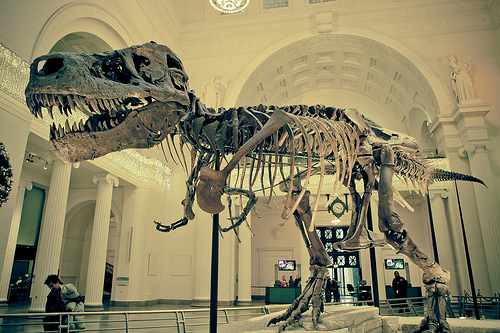 At Chiba Institute of Technology in Japan, Sohsuke Ohno’s team ran a thorough laboratory simulation, showing that one possibility is seriously acidic acid rain. When the asteroid hit the Earth, the sulphur-rich anhydrite in the ground (which is what the crater rock consisted of) oxidised. Until Ohno’s experiment, it was generally thought that the sulphur would be oxidised into sulphur dioxide. Sulphur dioxide would have stayed very long in the stratosphere, and only slowly oxidised further into sulphur trioxide, falling as relatively mild acid rain. But this was not what happened in Ohno’s experiment. Oh no.

Instead, the sulphur was mainly oxidised all the way to sulphur trioxide. According to the group, this would rapidly have formed sulphuric acid aerosols (fine particles suspended in air or gas) which would then be picked up by silicate dust grains from the asteroid impact, making it fall as incredibly acidic rain. Such rain would significantly decrease ocean and soil pH, killing off many plankton species and in general damage the global ecosystem, essentially dissolving calcareous (made from calcium carbonate) skeletons.

Although this is a really interesting finding, whether or not it can explain the entire event remains to be seen. It’s entirely possible that the explanation is complex and that only a combination of factors can explain it in full. Other important and fascinatingly terrifying hypotheses currently exist, a main one being the idea of global darkening: a suppression of photosynthesis caused by a global distribution of stratospheric dust particles and a so-called impact winter, caused by the asteroid hit [lref id=2]. Such hypothesis diversity might make one want to dramatically shout out WILL WE EVER KNOW THE TRUTH?! – but really, we are just seeing science unfolding, creeping closer and closer to what actually happened those 66 million years ago.

This enthusiast, at least, looks forward to more enlightening research in the future.

*Exactly how long the mass extinction event took is still controversial and is estimated to be everything between a couple of years, thousands of years or even longer.