In polite society there is not much talk of genitalia. Why not? Perhaps we humans are unimpressed with our own, and mammalian genitalia are usually not much to look at. Pub quizzes may pique our interest concerning corkscrew pig penises and the terrifying weaponry used by male cats. But delve deeper into the world of genitalia, and you will discover structures so bizarre as to appear gratuitous; in fact they often illustrate the intense and almost universal battle between the sexes. In their peculiarity, genitalia are beautiful and fascinating.

In the world of genitalia, male parts are often the more externally elaborate: females are usually the choosier of the sexes, often resulting in small, concealed entrances which the males have to work hard at penetrating. However, female internal structures can be an entirely different matter. One spectacular example often goes unnoticed in our parks and gardens. Ducks are unusual among birds in that the males (drakes) possess penises. Size evidently does matter for drake penises, which can extend to over 40 cm long [lref id=1]. Drakes often force copulation on the females (ducks), shooting their long, flexible, corkscrew penises deep into the duck’s reproductive tract. Ducks have responded to this unwanted attention by evolving intricate internal labyrinths, spiraling in the opposite direction to the male corkscrew, and filled with blind endings. The duck seems able to relax this system when she willingly mates with a drake; if copulation is forced, however, males have a hard time getting their semen very far up her reproductive tract [lref id=2]. The female ducks get the last quack (sorry), choosing which drakes sire their offspring. The ability to select which male gets to be daddy is known as cryptic female choice, and is a prevalent strategy in the animal kingdom. 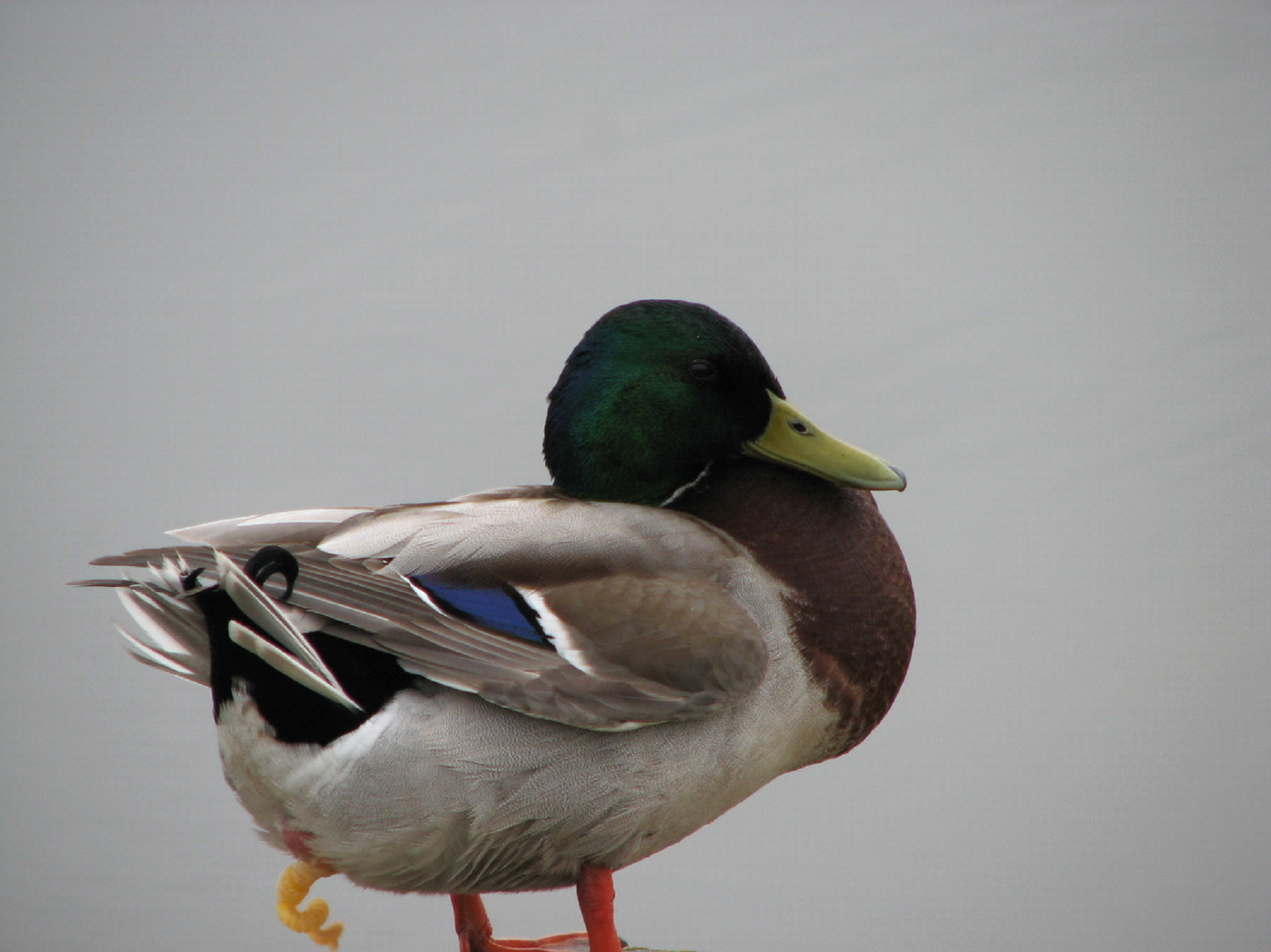 Image Credit: Glen Bowman via WikiCommons ( License )A mallard drake and his penis.

Ducks forcing each other to mate may sound brutal, but the invertebrate world produces more sinister mating arrangements. Callosobruchus maculatus weevils have a rather S&M-style love life: the male C. maculatus has a mace-shaped penis, with retractable spines that evert during copulation, sinking into the female’s reproductive tract [lref id=3]. The resulting damage may cause female C. maculatus to delay subsequent copulations while her genitalia heal, maximising the number of eggs fertilised by the last male. The internal wounds may also speed up the transmission of certain compounds in the semen, which increase egg-laying rates. Female C. maculatus respond to being mutilated by kicking their partners, which shortens copulation times and reduces the amount of damage sustained [lref id=3]. 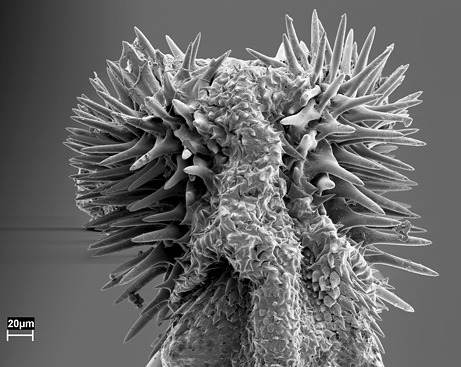 Weevils, at least, survive mating and may go on to have further dysfunctional partnerships. Some male invertebrates bypass the female genitalia completely, instead using their penises as hypodermic needles and injecting sperm directly into her abdominal cavity. Traumatic insemination, as this mating behaviour is known, wounds the female and may lead to infection and death. As painful as it sounds, this is a rather successful mating strategy that has evolved several times and is present in many animal orders, including bugs, worms and flies. Traumatic insemination takes classic sexual conflict to the extreme, illustrating the male’s need to father as many offspring as possible. Because females invest more in each offspring (eggs are bigger than sperm, and females usually spend more time incubating and rearing the young than males), they tend to be more choosy about who fathers their offspring, in order to maximise their potential to survive and have offspring of their own. The female’s desire for quality males, at the expense of having fewer offspring, means that a male must prevent females from choosing a different male to father her offspring. In the case of traumatic insemination, the strategy is to ensure she can only mate once. If she dies after giving birth, so be it.

The above examples of penile weaponry may make females seem disadvantaged in the sexual arms race. While they have almost guaranteed parenthood, females must endure the creative, but pernicious, attempts of males to maximise the number of offspring they father. However, sexual conflict does not always result in traumatised females and promiscuous males. In spiders, the tables are usually turned to the female’s advantage; female spiders may live for many years, choosing their mates and even eating them afterwards, while the comparatively short-lived males must often develop elaborate genitalia, and in some cases sacrifice their genitalia or even their lives, to have a chance at siring even one batch of offspring. The cost of mating is generally greater to a male spider than to a female; she lays the eggs, guards them, and when they hatch the offspring disperse. She can store sperm, sometimes for 12 months or more, so that if the eggs fail she will just lay another batch. As if she doesn’t have it easy enough, she also has the power of cryptic female choice, discarding sperm from previous males if a better suitor appears. In contrast, Mr. Spider must use his brief existence to search for a female, enter her web, court her through the language of dance (or sing her a song), and use up to an entire lifetime’s worth of sperm to fertilise her. To prevent additional males from mating with her, he may break off a portion of his palpal organ (which is exactly what it sounds like) and block her reproductive tract with it [lref id=4].

The highly unusual sexual strategy used by spiders has led to some wonderfully intricate genital adaptations. Male pedipalps can consist of a variety of structures, collectively known as the palpal organ, and supported by the cymbium (a large bulb that is also sometimes used for singing or stridulation). Most palpal organs contain a spermaphor, which stores the sperm; a median apophysis, which apparently helps the male position himself just right; and a conductor, which supports the sperm-transferring embolus. The embolus is often the most striking feature of male spider genitalia, as it can be coiled into different shapes. Some spiders also have specialised balloon-like structures called haematodochae, which inflate with spider blood when the male becomes frisky, and push the components of the palpal organ into position [lref id=5]. 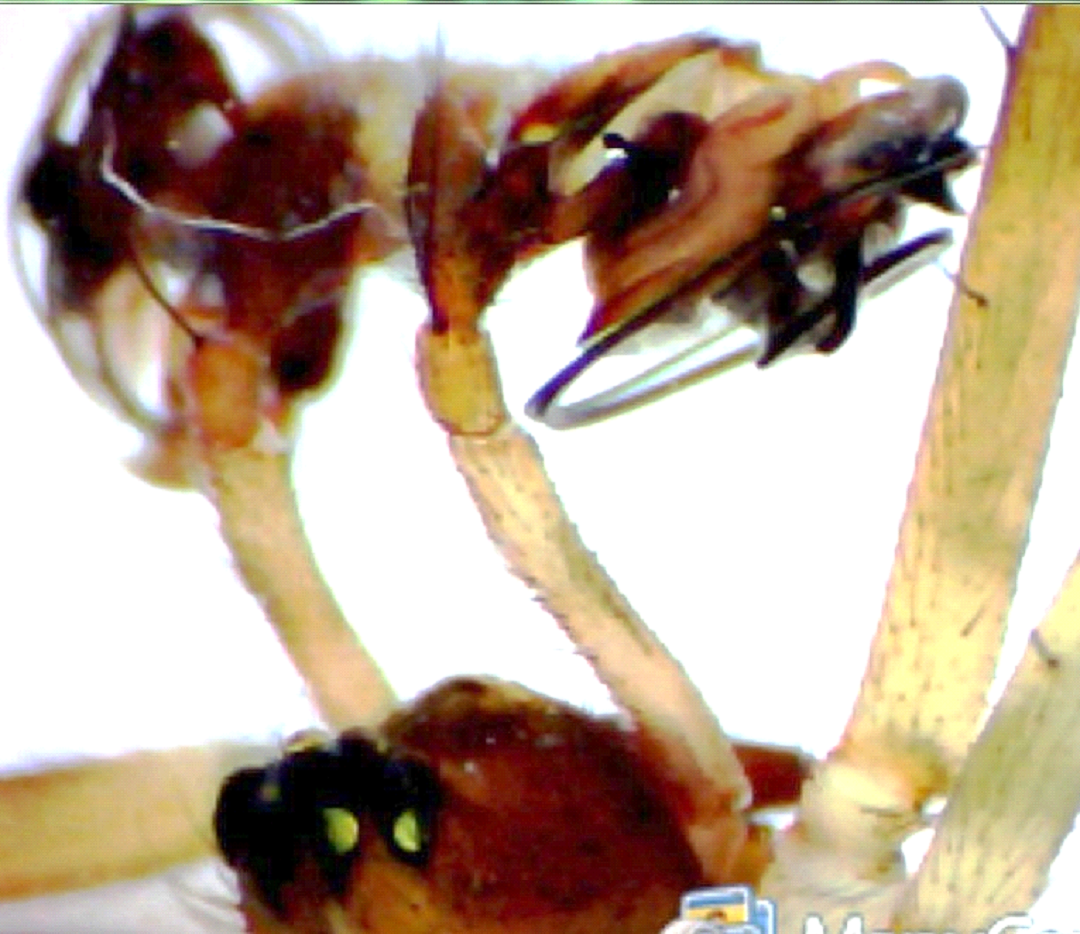 One of the reasons why arachnologists, and particularly those who study spiders, are so hung up on genitalia is because they are important in identifying different species. Spiders are notoriously hard to identify, forming complexes of “cryptic species” which look similar but are genetically distinct. Often, the only visual way to tell the difference between two species of spider is to compare genitalia. This can have important conservation implications: for an analogy, tigers and lions are different species in the genus Panthera. If lions looked identical to tigers, and were treated as the same species, then tiger conservation would not be the high-profile, global concern that it is today. However, if lions were then found to be a different species from tigers, based on their genitalia and DNA, all of a sudden tigers become a conservation concern. Telling species apart is important for the preservation of biodiversity. 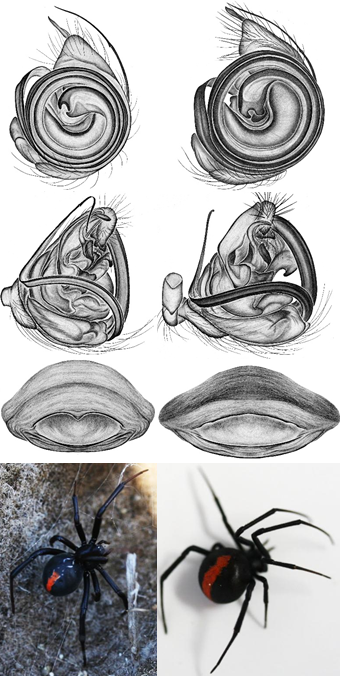 Fierce conflict between the sexes may be a source of strife for many a duck or spider, but, admittedly, it has resulted in a diverse array of cool structures. Spiky penises, coiled emboli, and corkscrew vaginas would never have evolved if everyone’s reproductive aims were the same. We, being humans, may think ourselves above sexual conflict, but upon examining our culture this is clearly not so. While young men are expected to play the field, have multiple partners, and think about sex all the time, women traditionally have fewer sexual partners and rear the children. Perhaps it is time to discard these relics of our evolutionary past, using our own logic and morals to move forward.