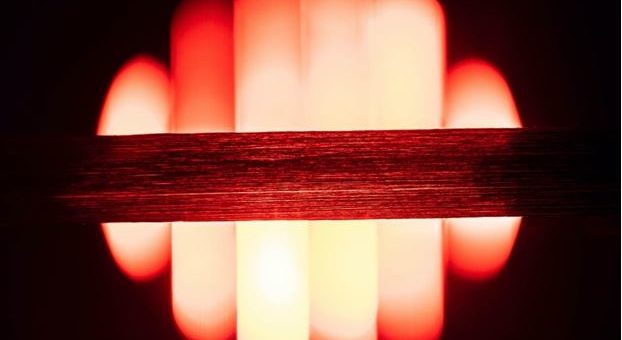 Hybrid carbon fibre composite material currently in development designed to be a multifunctional sensor and a “smart skin” for structural health monitoring. Image by Sheik Abdul Malik (CC BY 2.0)

Carbon fibre materials have completely revolutionised the engineering landscape and resulted in advances across several different industries from automotive to aerospace.  Whilst initially created in 1860 by Sir Joseph Wilson Swann – a physicist who is perhaps best known for his work on the incandescent lightbulb – it was not until the late 1950s/early 1960s that carbon fibre was recognised for the properties that make it the invaluable material it is today.

Carbon fibre is a lightweight polymer with a number of applications within industry and manufacturing. It is renowned for its strength when compared with other traditional materials such as steel. A single strand of carbon fibre can be in the region of 5 to 10 microns in diameter, which is around 7 times thinner than a human hair. However, despite its fine structure, when these crystalline filaments of carbon are woven together to form a cloth-like material it displays several key properties. It is durable, with high tensile strength greater than that of steel. It is corrosion resistant and exhibits tolerance to extreme heat. Coupled with a low weight to strength ratio, it is easy to see why this material is favoured by engineers and designers across the world.

Sheik Abdul Malik, an engineer based at the University of Strathclyde, is at the cutting-edge of Carbon fibre research.   In an interview with Malik, he notes how vital the material is for the aviation industry, stating that “Carbon fibre is a revolutionary material and one that has allowed for numerous technological innovations within the aviation industry and beyond due to its unique properties.  You simply cannot achieve these types of weight savings in aircraft with conventional metals”. When asked about his thoughts on the future of carbon fibre Malik highlighted that “advancement of human civilisation is rooted in the enhancement of materials. In order to transition to meet the challenges the next generation will face; we need to be innovative and bold”.

Over the past decade, researchers have been moving beyond traditional carbon fibre materials and attempting to reinforce their properties further, as well as expanding their use. My own research focuses on the electrical properties of carbon fibre composites, to understand their behavioural characteristics to develop smart sensors and structural energy storage technology.  A goal which could see the use of carbon fibre in monitoring the structural health of buildings for example or other large-scale systems, including the next generation of aircraft.

Yet, it is not just the aviation industry that employs this sought-after material. An article published by the US Department of Energy commented on the fuel consumption of passenger cars which were made from carbon-fibre composites, citing a 35% improvement in efficiency[1]. Carbon fibre can also be used in bicycle frames; and in a world where the climate crisis could not be more relevant, alongside the move towards a zero-carbon future, it is such materials that are going to be leading the way.

@MaisieKeogh is a doctoral researcher at the University of Strathclyde in the Department of Biomedical Engineering where she is developing innovative rehabilitation techniques for stroke patients, amputees and children with cerebral palsy. She is passionate about science communication, reading and frequently drinking coffee.