Not so many cuckoos in the nest 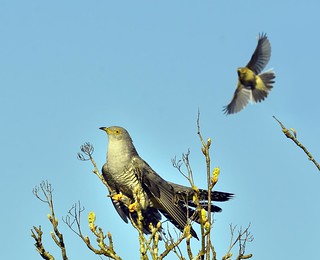 Climate change has been a very ‘hot’ topic recently. Students have taken it upon themselves to bring the world’s attention to the importance of climate change in their future. The most recent example of this is the Global Climate Change Strike. In the last couple of summers, we experienced much warmer and sunnier weather. In fact, the UK is on average 1% warmer since 1950 and Scotland is 11% wetter1. These warm days, although pleasant, are having a large impact on birds with their habitats shifting more north-northwest2 due to the higher temperatures.

Similar shifts have been observed all over the world34. Such shifts can have a large impact on existing ecosystems leading to competitive behaviours with other species or depletion of food supplies.

Climate change has a particularly negative effect on migratory birds because they depend upon their wintering and breading grounds. Changes to those will have massive effects to the birds’ journeys. The expansion of the Sahara Desert is one such example. The decreased rainfall in this part of Northern Africa and the retreat of the subtropics rainfall more south has led to the expansion of the desert by 10% since 19205. This is a seemingly small change, but it has a detrimental impact. This expansion means that birds who fly over the Sahara Desert must increase their journey, risking starvation, exhaustion and becoming prey to predatory animals.

One example is the cuckoo, whose declining populations in the UK have been marked of great conservation concern by the British Trust for Ornithology6. Cuckoos take two distinct routes to migrate to the African rainforest. More northern populations use a ‘West’ route which passes through Spain, whereas birds that breed in the more south-east parts of the UK take an ‘East’ route over the Balkans7. Both journeys can take up to 30 days, which will have to increase with the further expansion of the Sahara Desert.

Moreover, there has been increased mortality in the birds taking the ‘West’ route on return. This has been linked to the reduced rainfall in Spain and human agriculture, which minimises food availability at stopover8.

The effects climate change and humans have had on bird migration are devastating and the cuckoo is just one small example. The same threats are faced by many other migratory birds that travel similar routes. This is why initiatives like the Global Climate Change Strike are important not only for our own future, but for the future of the rest of animal kingdom.

I am a final year PhD student in Psychology. My research focuses on autism and how individuals perceive simple and human motion in an uncertain environment. I am passionate about my research but I am also a big bird lover. Armed with a pair of binoculars and some bird food, you can find me where the birds are.

I urge everyone from @UniStrathclyde to do this survey! If you or someone you know who has been harassed, bullied or been discriminated against! It's important for the University to know what actually goes on https://www.strathunion.com/ents/event/1187/

This, by @rooneyw1991 was picked up by @SPAJournalism for their most recent magazine 🤩

Originally published in our #ScienceIsForEveryone issue, check it out below 👇

Thanks to @emilyxarmstrong for editing. Artwork by Ryan Harley.

Check out my latest @GlasgowGist article about how we can die better! This was featured in our ‘Science is for Everyone’ Issue and the temptation to call it ‘Dying is for Everyone’ was overwhelming https://the-gist.org/2020/01/modern-medicine-and-successful-dying/