Science for Political Friends Only

“I will check who is using Treefinder and I may sue the license violators.”

In science, we try hard to separate personal belief from research. As such it took a while for the warning received on September 29th to sink in. In 2004, Gangolf Jobb released Treefinder, a piece of software used to reconstruct evolutionary relationships. It became popular as it was easy to use and combined several methods into a single tool. However, whilst free to use, Gangolf Jobb retained the copyright… and here is where it gets personal, as he recently changed the licence to reflect his questionable political views.

“I do no longer permit the usage of my TREEFINDER software in the following EU countries: Germany, Austria, France, Netherlands, Belgium, Great Britain, Sweden, Denmark – the countries that together host most of the non-European immigrants.”

In February this year, US researchers were banned from using Treefinder in “protest against American imperialism”. His co-authors quickly distanced themselves from him, with one (Dr Korbinian Strimmer, Imperial Collage London) branding his an “extremist, racist, and otherwise crude world view”. In an interview in October, Gangolf Jobb stated that he thinks a small group of US “elites” is seeking to control the world through migration and the destruction of nations, i.e. American globalisation1. The reality is probably simpler.

In 2004, Gangolf Jobb broke off his PhD at the prestigious Max Planck Institute for Evolutionary Anthropology in Leipzig, Germany, and joined Dr Korbinian Strimmer’s group at the University of Munich, where he released Treefinder2. Unsatisfied with the low wages he left and, while continuing to develop Treefinder, sought better-paid employment in his hometown of Munich, where he could conduct his own research. However, the reality of academia is that junior researchers work on other people’s projects, often on low wages and rarely on their preferred topic unless prepared to move. Gangolf, for reasons we can only speculate on, decided to blame this flawed state of affairs on immigrant scientists.

Whilst correct that our current system offers low pay and instability, Gangolf Jobb has had a less than constructive attitude. Over recent years he has emailed thousands of senior researchers, criticising both them and their “immigrant programmers” (see the October interview). His current licence changes will be just as ineffective. The reason researchers used Treefinder was largely incumbency—nobody wants to waste time developing or learning new tools when there is one at hand. However, Treefinder is showing its age, and there are now numerous alternatives3. As researchers drop it like a soiled undergarment, some reanalysing data using other programmes, Gangolf Jobb has provided science with a valuable lesson — read your software agreements! Who knows what you may be agreeing to.

Gangolf Jobb announced his licence change through a professional mailing list, EvolDir (Evolutionary Directory). A screen shot of this, along with some of the reactions, can be viewed below: 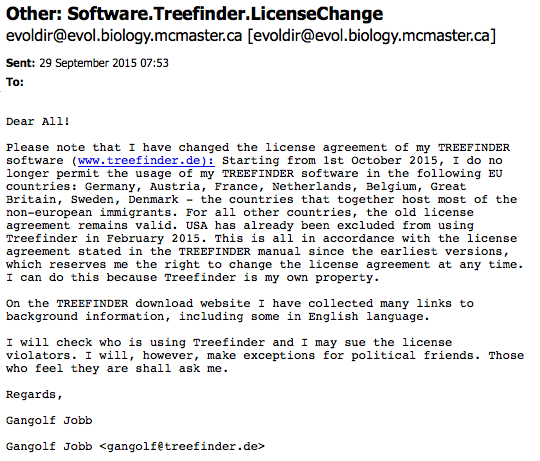 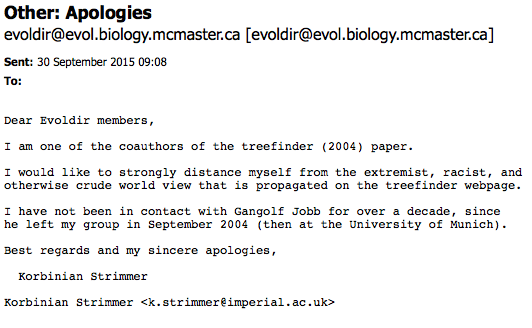 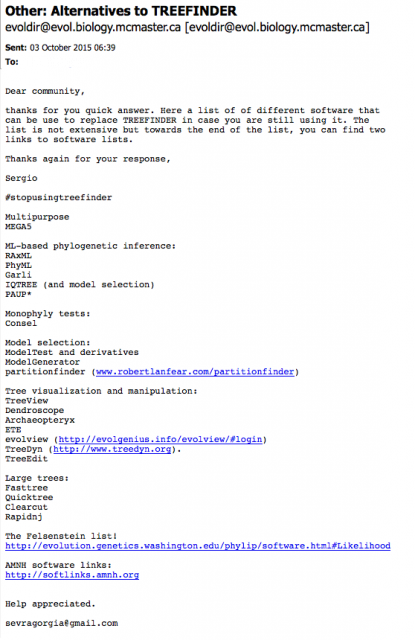 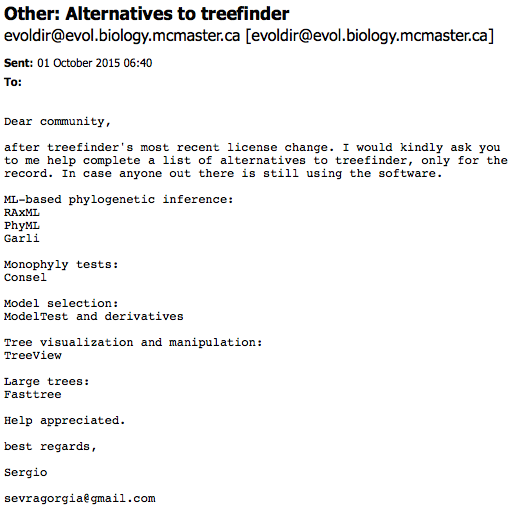