At 01.24, on the 26th of April 1986, one of Chernobyl’s four nuclear reactors exploded. Within 66 minutes the management team of Chernobyl Nuclear Power Plant were in the underground bunker below the facility. The explosion had killed 2 workers and many others had already received a lethal radiation dose. Acute radiation sickness killed a confirmed 28 power plant and emergency workers1. The group of managers in the Chernobyl bunker, the Government of the USSR and others from around the world, had to come up with a plan to deal with the world’s worst nuclear power disaster.

On the 2nd of September this year, a group of UK based scientists met at Boryspil Airport, Kiev. They were all members of a UK government funded consortium involved in research related to radioactivity and the environment. Their specific research subjects vary widely, ranging from the fate of radioactive waste released by UK nuclear facilities, to the effects of radiation at the genetic level in specific species. Most of the group, including myself, were PhD students travelling to Chernobyl to learn about the accident and the legacy it has left in the surrounding environment.

To reach the power plant itself, our group had to pass through armed checkpoints which mark the Chernobyl Exclusion Zone in Ukraine. The zone covers a total of 4200 km2 and in Ukraine is divided into an outer and inner zone with checkpoints at each. The inner zone is an approximate 10 km radius around the power plant and as we drew closer to the plant, the first buildings to come into view were 2 unfinished cooling towers. These cooling towers were being built previous to the accident, in preparation for the construction of 2 new nuclear reactors. The reactors were never built. From outside the entrance, the power plant is a grey, rather featureless 4 storey building. Some decorative mosaic-like features and flowers by the road and the Ukrainian flag provide a splash of colour. The building stretches off in one direction where Reactors 1, 2, 3 and the remains of 4 are housed. People still work here. The last operational reactor was shut down in 2000 and decommissioning work is ongoing at Reactor 1. 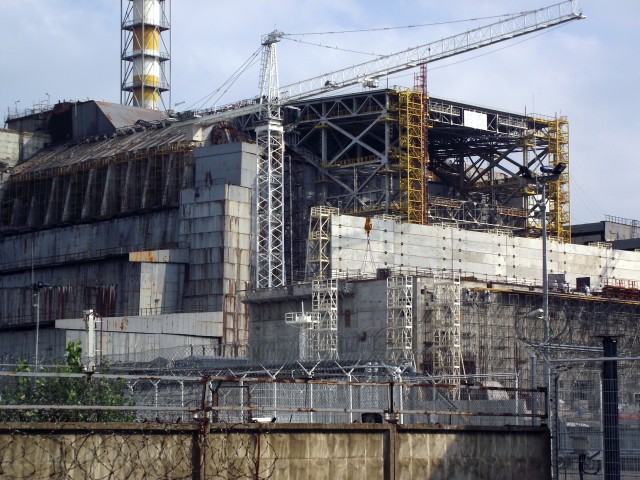 The sarcophagus in which the exploded reactor resides. Image Credit: Kieran Tierney.

The accident at Chernobyl followed a failed emergency shutdown whilst Reactor 4 was being used for experimentation. Debate continues over what actually occurred during the lead up to the accident. An emergency shutdown of the reactor involves fully inserting control rods into the fuel material. These rods are able to absorb neutrons, which could otherwise split uranium atoms in the process of nuclear fission. By fully inserting the rods, all the neutrons should be absorbed and the fission reactions then stop, resulting in power generation halting. During the experiment, most control rods were fully removed from the reactor. An attempt was made to re-insert the control rods for the emergency shutdown; however, the control rods did not fully insert and power generation increased. The build-up of steam caused at least one explosion which destroyed the reactor casing and blew the 2,000 ton reactor lid into the roof. Debris from the core was scattered around the power plant and radioactive particles were dispersed into the atmosphere2.

We were taken to the underground bunker where the power plant management met after the explosion. A large conference table dominates a room with name tags and phones at each seat; the bunker would still get used today in the case of another emergency. In the immediate aftermath of the accident, whilst decisions were being made in the bunker and elsewhere about the future of the power plant, emergency workers were arriving. The first to respond were firefighters who tackled fires around the reactor building. However, in doing so, they exposed themselves to high levels of radiation. Radiation poisoning damages DNA, preventing cells from dividing normally, and causing a number of symptoms including nausea, vomiting, bleeding, loss of consciousness and potentially death. For those firefighters who received a high radiation dose, the symptoms of acute radiation sickness would have appeared within a few hours and potentially even within minutes. A large memorial within the exclusion zone is dedicated to the firefighters and in particular to the 7 who died from acute radiation sickness.

Those who entered contaminated areas during the attempt to clean-up Chernobyl were referred to as liquidators. Robotic equipment was purpose built to deal with radioactive material in areas of high radiation risk but the radioactivity affected the electronics and rendered many machines useless. Much of the radioactive material which had blown out of the reactor building was brushed back in by hand. The clean-up of hazardous material from around the power plant continued for several years and involved at least 300,000 liquidators. Their work included clearing areas of contaminated forest, removing levels of topsoil which was then buried at depth and the creation of vast graveyards of vehicles which were in the vicinity of Chernobyl at the time of the accident and the vehicles which were used during the clean-up3. However, the radioactive material may not remain buried: there is the risk of groundwater transporting dissolved radionuclides back to the surface and possibly into streams and rivers which feed into the Kiev Reservoir.

One of the most significant radionuclides released by the accident is a radioactive isotope of the element caesium (137Cs). This was released into the atmosphere and dispersed globally by weather systems but high concentrations fell out in areas of the planted forest close to Chernobyl. The Scots pine forest accumulated caesium in high enough concentrations to kill several square kilometres after the accident. This area is called the Red Forest due to the colour of the trees after they died. We visited part of the Red Forest which is now showing some regrowth. Carrying Geiger counters, we saw roughly a 10-fold increase in radioactivity from the road as we walked through the grass towards the forest. The radioactivity was primarily coming from caesium which was in the soil below our feet. With the level of activity we measured, we would have hit our allowed annual radiation dose limit within a few hours. We left after only a few minutes, safely disposing of our boots.

To prevent continued releases of radioactive particles into the atmosphere, and to allow continued power generation in the remaining 3 reactors, a concrete cover called the sarcophagus was built to entomb Reactor 4 in May 1986. We stood within 250 metres of this structure behind several layers of razor fencing. There have been growing concerns that the roof could collapse, resulting in the release of another plume of radioactive particles. However, facing the sarcophagus is a construction being built in response to these concerns. The New Safe Confinement, also known as the arch, is a £1 billion steel structure which won’t only replace the sarcophagus but create safer conditions in which to remove the radioactive material in Reactor 4 to be disposed of appropriately. The construction is very labour intensive partially due to the current radiation levels above the sarcophagus. Anyone working on the roof can reach their allowed annual radiation dose limit within 12 minutes and so must work off-site afterwards for the following 12 months. The arch is nearing completion and is currently projected to be ready in 2017 when it will be moved over the sarcophagus4. 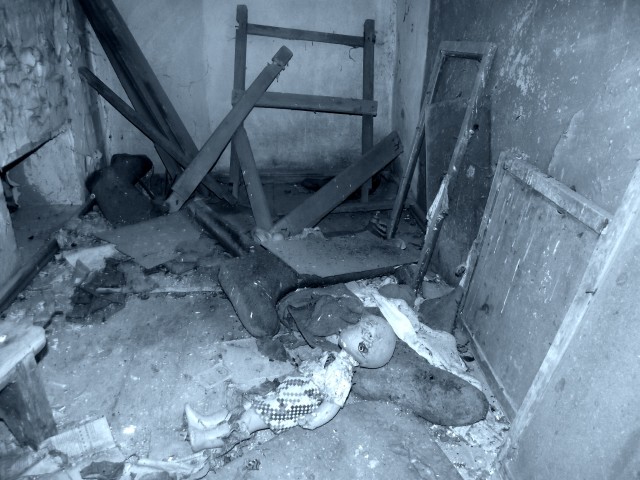 An abandoned doll in an abandoned house in the abandoned village of Buryakovka. Image Credit: Kieran Tierney.

Around 3 km from the power plant is the city of Pripyat. The city was built with the purpose of housing the power plant workers and officially opened in 1970. This is marked by a large, white stone sign on the road leading to the city. Other signs now stand beside it warning that it is a site contaminated with radioactivity. The decision to evacuate the city’s approximately 49,000 residents wasn’t made until the day after the accident. Residents were told this would be a temporary evacuation; however Pripyat is now a ghost city, haunted by graffiti, which no one returned to. Hollow buildings littered with glass and the rubble from collapsed ceilings stand alongside cracked roads and pavements with shrubs and trees growing wherever their roots can break through the cement. The iconic Pripyat amusement park with its Ferris wheel was due to open for the May Day celebrations that year. No child got to ride on the wheel or any of the other attractions which are now rusting away.

In a neighbouring village, personal belongings could be seen in houses and other buildings. Books lay scattered around the library, film reels on the floor of the projector room, an abacus sat on the side of the washroom sink and a child’s doll lay amongst old newspaper, decaying clothes and broken furniture. It was an eerie place to walk through but there was also a sense of natural restoration. Trees were growing over and even through some of the buildings. Where humans had once farmed and lived their lives is now green forest, filled with the hum of insects and the occasional bird song. Underfoot we saw evidence of animals foraging, footprints, partially eaten fruits and the products of digesting said fruit and other vegetation. Some of the lead scientists in our group have used this site for their recent research. By using camera traps and sound recorders they are aiming to establish the relative diversity and abundance of animals in the exclusion zone. Their camera traps have captured a large variety of animals including moose, bison, raccoon dog, lynx, wolf and Przewalski’s horse, which was introduced to the area following the establishment of the exclusion zone5. Aquatic animals can also be seen with “monster” 2.5 metre catfish (this is a normal size for catfish) living in the Chernobyl cooling ponds which are linked to the Pripyat River.

Despite relatively high radiation still existing in some areas of the exclusion zone, it is obvious that this is becoming a haven for wildlife. Currently, no one knows what the long term effects of this radiation will be. However, the environmental effects of radiation, at least in some areas, appear to be less detrimental to wildlife than the presence of humans.

Thanks are extended to members of the Radioactivity and the Environment (RATE) research consortium and staff at the Ukrainian Hydrometeorological Institute who made the visit to Chernobyl possible.

This article was specialist edited by Teodora Aldea and copy edited by Sarah Spence.

Kieran is a PhD student at the University of Glasgow studying radioactivity in the marine environment. He likes adventures to new places, cooking spicy food and watching films with friends.