Dentist? Eh, no my teeth are fine. Look. No need for the dentist here. Nope. Image by Hy'Shqa via flickr (CC BY-NC-ND 2.0)

I’ll start with a confession, quite a common one: I’m afraid of the dentist. The heart racing, palm sweating, wanting to flee from the waiting room at rocket-speed kind of afraid. Having to relive the experience to write this feature is pretty awful. This fear also makes me feel extremely guilty, as I have no doubt that my own patients are  (usually) significantly better behaved when I rudely show up on a Saturday morning, barge into their house, open up their mouth and start poking about. I’m a vet and I love equine dentistry.  Today’s horses are lucky, well, if you can call any creature having to see the dentist lucky. Pain relief, local anaesthesia and sedation are now widely available to minimise discomfort and specifically designed tools are used to perform procedures efficiently.  Modern equine dentistry is well researched and evidence-based, but this wasn’t always the case. Even if I’m afraid of the dentist now, I’m just glad I wasn’t a horse in the 16th century.

Ancient roots. Get it?… Never Mind.

It might be hard to imagine, but today’s race horses, show jumpers, children’s ponies and police horses all originated from a prehistoric creature called Hyracotherium which was about the size of a rabbit. Strange, but true. Hyracotherium mostly ate leaves and had simple low crowned teeth, similar to the ones you might be using to munch your lunch as you read.  Environmental pressures moved the horse’s ancestors out of woodlands and onto grassy plains which meant a diet of abrasive grasses. Eating abrasive material for 18 hours a day requires teeth that can cope with constant wear and so the horse developed high crowned teeth which constantly erupt throughout its life.  Domestication of the horse led to early observations of equine dental anatomy and disease with some being more accurate than others.  The Greek philosopher Aristotle was one of the first to document theanatomy of the equine mouth in ‘The History of Animals’ written in 333BC 1. Aristotle correctly numbered the teeth at 44 in the adult and even described periodontal disease in the horse, which is still a common problem today. In ‘The Veterinary Art’ written between 450-500 AD, Vegetius also described this condition as ‘pain in the sockets of the teeth’, which is pretty accurate. His recommended treatment was to apply vinegar and chalk to the face of the affected animal, which would unfortunately be about as much use as a chocolate teapot.

During medieval times, horses became increasingly important in daily life. They were the main method of transport, worked in armies and on farms and became valuable commodities. Unfortunately, there were few advances in veterinary medicine and dentistry and ‘treatments’ based on hearsay and folklore were widespread and invasive. With the knowledge that horses could be aged by examining their incisors, you really could ‘look a gift horse in the mouth’ which, to be honest, is a bit rude really. Well, only if an unscrupulous character hadn’t previously altered the teeth to make the horse appear younger and more valuable, a common practice at the time.

A variety of horrifically cruel and painful ‘treatments’ were used by the local equine healthcare provider – the blacksmith – to cure an extensive array of ailments. A nightmare-inducing array of instruments more suited to the DIY shed: saws, chisels and ‘gum knives’ were used in an effort to correct overgrown teeth, often with disastrous consequences. Worse than ill-informed treatment of actual conditions were the procedures aimed at imaginary diseases. The hard palate of the young horse often has a small enlargement behind the upper incisor teeth, which is  normal, but in the 16th and 17th centuries this was thought to be a disease known as ‘lampas’ and was dealt with by application of a red hot iron rod. I can’t cope when I impatiently burn my mouth with my dinner so I’m sure this was excruciating. Another curious imaginary disease was mentioned in the ‘Boke of Husbandrie’ written in 1523 by John Fitzherbert. ‘Vives,’ was described as a non-pathological swelling of the horse’s parotid salivary glands which needs to be ‘killed’ or else it will ‘eat the root of the ears and kill him.’ Fitzherbert doesn’t mention how exactly to kill ‘vives’ but I imagine it was pretty gruesome 2. Horses were also mutilated to accommodate ill-designed, metal bits used to for control with some advocating widening of the mouth in the style of the well-known ‘Glasgow smile.’

Light at the end of the Dark Ages tunnel

Things began to change in the 18th century with the first veterinary school established in 1762.  Strange cures for imaginary ailments passed down through the ages were slowly replaced with new diagnostics and treatments based on scientific research. The horse was the main focus of veterinary education, due its important role in daily life, but progress in veterinary dentistry was slow. In 1824, William Percival, a prominent veterinary surgeon at the time said ‘Diseases of teeth; this is a subject which I have little to offer.’ Some progress was made, however, with the publication of new information on anatomy and dental disease. In 1895, the Haussmann gag was invented to hold the mouth open, allowing a good examination and treatment to be performed safely. It also has the added bonus of allowing the examiner to keep their fingers, and is still used today.

In the early 1900s, several authors recorded post mortem surveys of dental disease and the high prevalence of dental diseases such as periodontitis, malocclusions and caries (tooth decay) in the horse was noticed. Whilst significant discoveries have been made, the cause of tooth decay in the horse is still a mystery today, but I’m fairly certain it’s not naughty horses eating too many sweets and not brushing their teeth before bedtime 3. 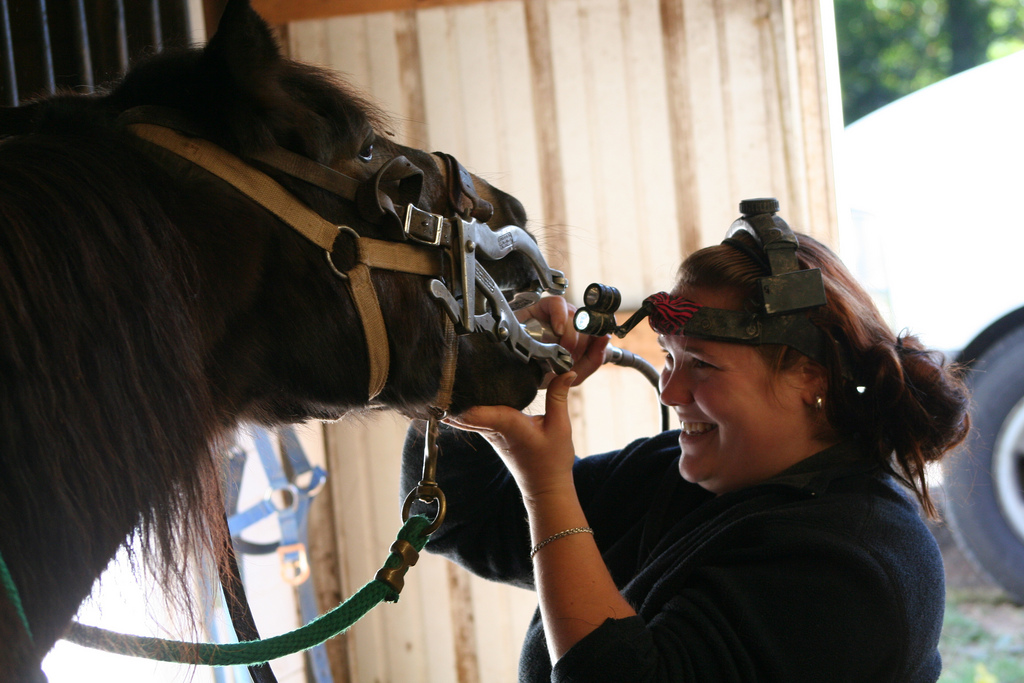 A modern equine dentist. Image by Lisa, via flickr (CC BY 2.0)

Modern horses can look forward to a variety of dental treatments just like the ones we, um, enjoy. Vets can now perform fillings, minimally invasive extractions and sometimes even root canals, which are difficult techniques given equine anatomy.  Dental overgrowths are removed carefully, quickly and painlessly with electrical power tools, a far jump from the saw and chisel method of the past. And research into the equine mouth continues.

It’s well known that bacteria play an important role in human dental disease, so much so that researchers have been investigating the community of bacteria present in the human mouth (the oral microbiome) for decades. This is an area of research which has been neglected in the horse, but a new project involving collaboration between researchers at the University of Glasgow’s Dental and Veterinary Schools and the University of Edinburgh’s Royal (Dick) School of Veterinary Studies is uncovering the oral microbiome of the horse. By using modern molecular biology techniques, which can detect bacteria in clinical samples without the need for bacterial culture, we will be able to discover which kinds of bacteria live in the horse’s mouth normally, and which might be involved in diseases like periodontitis. This could allow new therapies and treatments to be developed which are hopefully more evidence-based than applying vinegar and chalk to the face.

We’ve come a long way from Aristotle’s early discoveries, through the gruesome treatments of the middle ages to modern day equine dentistry and research. Thankfully now equine dentistry can make horses more comfortable, improving equine welfare instead of causing unnecessary suffering. So, if, like me, you find yourself panic-stricken in the dentist’s waiting room, terrified of the noises coming from next door, think about how lucky you are to have pain relief, anaesthetics and evidence based treatments…and just be glad you weren’t a horse in the Middle Ages.

This article was specialist edited by Vikki Smith.

Beka is a qualified vet studying for a PhD in the oral microbiology and immunology of the horse. She loves the great outdoors, jack russell terriers and camper vans and can sometimes be found running up hills.