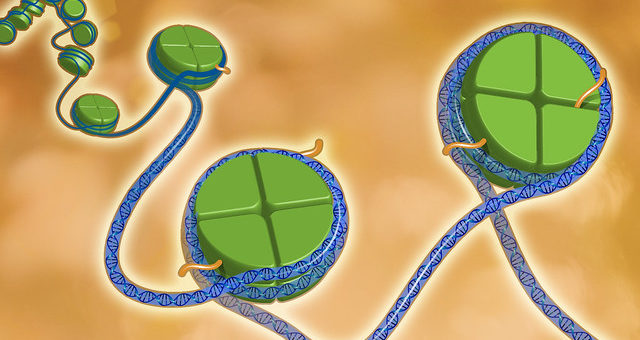 Our bodies are made up of trillions of cells, and, throughout our lifetime, our cells continuously divide and produce new cells. In fact, some of the cells in your body will have divided to produce new cells by the time you finish reading this article. The new cell inherits information from its mother cell in the form of DNA, a genetic blueprint; this exact same information is found in all of our cells. Yet, despite all of these cells having the same blueprint, there is plentiful diversity of cell types in our bodies, which perform a variety of distinct functions.

So, if each cell inherits the same genetic information, why do we see such differences in function?

The answer to this question lies in the transmission of additional information which does not alter the underlying DNA blueprint. From the moment we develop, our cells have the same genetic information, but the genes in our cells are switched on and off as they are needed. For example, some are only required when we are still an embryo whereas others when we are teenagers or adults. This also happens in our cells; some genes are switched on to become a liver cell and others switched off to ensure it stays as this cell type. This information can be passed from mother to daughter cells during division, just like a mother passing on instructions to her child on how to bake the favourite family cake. Just following the recipe may make a cake, but all the little tips and tricks written in the margins will really make it special, just like a cell inheriting its parent ‘memories’. The blueprint is there, but the extra information helps the cell decide what to become. Here, this form of cellular memory is known as the epigenome.

But what is the epigenome of a cell?

In our cells, DNA is stored in a compact form, known as chromatin, which is located within a structure called the nucleus. Here, DNA is tightly wound around specialised proteins known as histones. In turn, these histones are arranged as complex structures which link together to tightly pack the DNA as chromatin. On the DNA itself and to these histone proteins, chemical modifications can be attached; when a cell divides, not only is the DNA sequence inherited, but these chemical, or epigenetic, modifications are also passed on to the daughter cells. This provides the new cells with an additional set of instructions, which play a key role in influencing their ability to develop and perform specific tasks. These modifications are referred to as the epigenome of a cell and can be considered a type of cellular memory.

Epigenetics, the term first coined in the 1940s by Dr Conrad Waddington to describe this phenomenon, is currently a scientific ‘hot topic’. But despite interest from many labs around the world, numerous fundamental questions still remain about how epigenetic information is inherited. Is the information inherited randomly? What cellular processes are involved in storing and passing on this information? Which proteins in the cell help to facilitate this process? To try and address this deficit in our knowledge, scientists in Denmark developed a technique to examine epigenetic inheritance in mouse embryonic stem cells, shedding some much-needed light on this complex process. The technique, known as SCARseq1 (or Sister Chromatid After Replication-sequencing), allows researchers to capture DNA undergoing replication and follow the fate of the epigenetic changes across cell generations.

Briefly, researchers can selectively isolate replicating DNA, which contains both newly synthesised and old parental histones (carrying potential epigenetic information). Newly synthesised DNA strands are then separated from parental DNA strands, and the samples are subject to deep sequencing to follow the pattern of histone inheritance by the daughter cells.

Using SCAR-seq, they not only confirmed that epigenetic modifications are not inherited randomly by the daughter cells but also identified a protein which plays a direct role in histone inheritance. The protein, known as MCM2, acts as part of a helicase complex. Helicases unwind DNA strands at the start of replication, allowing other proteins to access the DNA template; this process is vital to DNA replication. Scientists suspected MCM2 may be involved in the process of histone inheritance and, using SCAR-seq, were able to demonstrate MCM2’s role. Upon disrupting the function of MCM2 in mouse stem cells, transmission of the epigenetic information to the daughter cells was compromised. Now, researchers can begin to understand how epigenetic information passes from mother to daughter cells and tease apart the effect of the epigenome on the destiny of a cell. Looking beyond a single cell, we may begin to see how the epigenome influences the development of an organism throughout its lifespan and how this is passed on to its offspring; a new insight to cellular memory.

But why should we care about our epigenome?

Aberrant epigenetic inheritance has been shown to play a role in the development of disease states in humans. An example where this is the case is seen in  Beckwith-Wiedemann Syndrome (BWS), which affects approximately 1 in every 15,000 births2. BWS, in humans, is associated with symptoms such as abnormal organ development and gigantism (excessive growth) in addition to increased risk of tumour growth during embryonic development (~7–21%) and premature delivery 3. The cause of BWS has been linked to incorrect DNA methylation, an epigenetic modification caused by the addition of an extra chemical structure onto the DNA. In addition to such syndromes, the manifestation of neuropathies, such as Alzheimer’s Disease and Parkinson’s, have also been linked to aberrant inheritance of epigenetic information; a global reduction of DNA methylation (as a percentage of methylation in the whole genome) have been linked to the development of Alzheimer’s disease4. Given over 90,000 people in Scotland currently live with a dementia diagnosis5, understanding how these diseases propagate will provide an important stepping stone towards developing effective treatments to combat these debilitating conditions.

However, despite such a leap forward in our understanding of cellular memory, we are only beginning to scratch the surface of the importance of epigenetic modifications on our development. For example, not only are we now beginning to understand how our diet influences our epigenome but also how the diets of our mothers and grandmothers played a role in making us who we are today. Who knows what else we may discover!

This article was specialist edited by Kirstin Leslie and copy-edited by Annie Hackland.