A long walk or a giant leap?

New Zealand appears to be a tiny, isolated collection of islands in the middle of the Pacific Ocean. Its animals and plants are intriguing, bizarre even, and seem lost – what are parrots doing in the mountains? Aren’t the geckos a bit cold? And surely those bats should be in the air, not crawling on the ground…I have always been drawn to New Zealand’s peculiarity, the source of which is its ancient separation from Australia, which left all the wildlife to evolve independently during the Oligocene.

At least, that is what the old textbooks say 1. But recent glimpses through DNA into the evolutionary history of various insects, spiders and birds have revealed a different story 2 3. Kiwi, beetles and other inhabitants arrived in New Zealand after it separated from Australia. Moreover, New Zealand didn’t exactly exist when Zealandia, the vast underwater continent on which it perches, separated from Australia and promptly sank. Arguments are ongoing; 4 5 6, but there is currently little evidence to suggest that any land was above water during what is now called the Oligocene Drowning.

Nobody can prove outright that there was or wasn’t emergent land in Zealandia during the Oligocene. But we can collect as much evidence as we can, and see where it points us. This is where geologists, ecologists, and geneticists unite, in the science of biogeography 7. Believe it or not, identifying a group of organisms with unusual ecology, combining DNA sequences to create phylogenies (family trees), and dating them using rocks and fossils, can reveal roughly when the organisms first arrived in New Zealand. If they arrived after the Oligocene, they dispersed from Australia (by flying, or floating on rafts of debris, or riding on the back of an animal, for example). If they arrived before the break up of Zealandia and Australia, they may have ridden Zealandia like an ark before moving onto New Zealand when it oozed from the Alpine Fault 8. The ongoing argument over which of these scenarios is more prevalent is known as the “Dispersal versus vicariance” debate.

So where do trapdoor spiders come in? New Zealand is the home of Cantuaria, a genus of spiders that is endemic (not found anywhere else in the world). There are 42 recognised species, which is quite a few compared to other spider genera 9, and their closest family relatives are found far away in Australia, Asia, Africa and South America.

Cantuaria are not like other spiders that you might find protecting your garden from pests, or sitting nervously in your bath. Cantuaria are mygalomorphs – spiders from an ancient lineage that includes tarantulas, purseweb spiders and some funnel web spiders. They are big, chunky, tank-like creatures that can live for decades.

As baby spiderlings, they are looked after by their mothers for a few months, before leaving the mother burrow and building their own right next door. The females never budge from this initial burrow; they just widen it as they grow bigger. The males will leave their burrows when fully grown to search for love, but they will most likely find it a few metres away 10 11. These spiders could be described as home-loving, agoraphobic, hermit-like, and many other things besides – but they could never be considered great adventurers. Yet here they are, spread throughout New Zealand, with populations separated by water, open ocean, and great mountain ranges. How did they get here from other continents? Or have they been in New Zealand since it first formed? 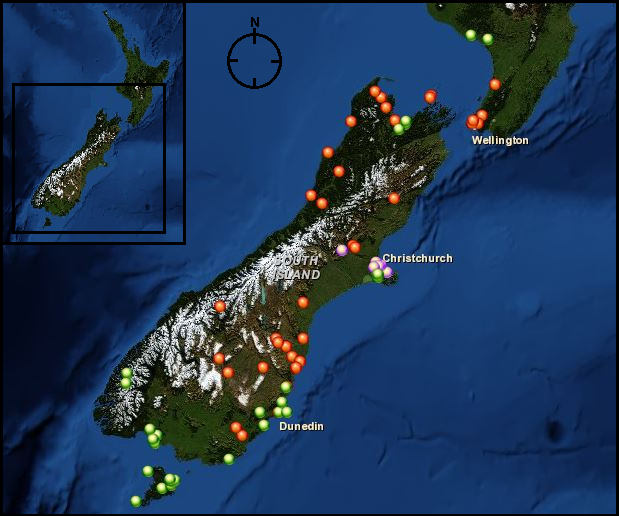 Figure 2: the distribution of known Cantuaria populations throughout New Zealand.

My mission over the next three years is to try to answer some of the questions regarding Cantuaria’s history in New Zealand. I will collect specimens from all 42 known species, and hopefully a few that are unknown as well. Sequencing their DNA will enable me to build a hypothesis of the evolutionary history of Cantuaria, known as a phylogenetic tree. Dating the tree using DNA mutation rates already tested for similar spiders should show roughly when Cantuaria split from their closest living relatives. If before the Oligocene Drowning, perhaps there was some dry land during that time. Cantuaria could in this scenario have survived the Oligocene Drowning, perhaps marooned on a tiny patch of dry earth, and then walked step by step as the waters receded to disperse throughout New Zealand. If, however, Cantuaria turns out to have arrived here after the Oligocene Drowning, then that would be an example of a most unlikely traveller making it across the ocean, and if Cantuaria did it then pretty much anything else could have as well.

As well as dating a tree (which my mother would not be happy about), I’m planning to do a few side projects related to their ecology and conservation issues. For example, I’d like to find out what kind of habitats Cantuaria can live in – how wet they like their soil, what kind of vegetation suits them best, etc – and how fussy they are about their habitat. I expect they are pretty fussy, since most trapdoor spiders are; finding out what habitat they like best will help the Department of Conservation decide which areas are worth protecting from habitat destruction. In addition to its conservation value, looking at how sensitive Cantuaria are to changes in their habitat will give us some idea as to how they would fare on a long oceanic journey sometime in the recent past.

The next three years will be an exciting challenge, and I hope I will have some interesting results to report. As well as elucidating some of New Zealand’s history, I’m really looking forward to finding out more about these enthralling spiders.