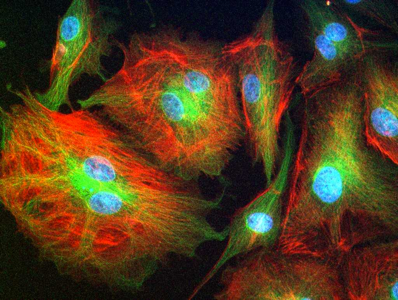 A new set of nano-tweezers were designed that can precisely pluck molecular samples from single cells without affecting their viability. This innovative tool functions with samples as small as 300 nm1, which is about 300 times smaller than the width of a human hair.2 These nano-tweezers allow the specific extraction of single molecules, compared to other methods involving non-specific collection from inside the cell, causing cell death.

The nano-tweezers are made of two carbon-based nano-electrodes as close as 10-20 nanometers which are attached to a thin glass rod. Within this rod, the samples are collected.  An electric field gradient is created by applying an alternating current (AC). This can generate an attractive force, which depends on the strength of the electric field. The electric field gradient can be optimised by adjusting the voltage of the AC to achieve a force to help trap biomolecules. This innovative solution, however, comes with a few limitations.

Higher voltages could lead to heat generation, which is damaging for the cell. In fact, high temperatures could alter the cell membrane and make it “leaky”. This potentially allows travel of harmful molecules into the cell and useful molecules out of the cell.  This also denatures important proteins (break-down their structure) which causes them to lose their function. The gap between nano-electrodes is so small that the optimal electric field gradient can be generated at lower voltages than other devices. In this way, it will be less likely to produce unwanted heat when manipulating the AC.3

The nano-tweezers can be moved with extreme precision using a micro-manipulator, which is a robotic tool that allows remote manipulation at a nanoscale level. The position of the nano-tweezers is monitored by using an optical microscope, and these can be inserted into live cells. When the AC voltage is applied, biomolecules near the electrodes become trapped in the nano-tweezers, and can be released by switching the current off.

How have nano-tweezers contributed to science?
Joshua Edel and his laboratory used the nano-tweezers to “pluck” sub-cellular components out of single cells, without compromising their viability.4 They extracted DNA from the cell nucleus, as well as messenger RNA (containing the instructions to make proteins) from the cytoplasm (the cell material excluding the nucleus). Moreover, the lab now has the potential to extract an intact mitochondrion (the power-house of the cell) from a mouse living brain cell.5

To analyse sub-cellular components of cells, it is necessary to split open the cell in a process called lysis, often leading to cell death. Unfortunately, through this process, the information acquired is restricted to the cell’s state at the time of the cell death.6

The new nano-tweezers will enable scientists to “pluck” information out of single cells at multiple time-points, without causing any harm to the cell. This technique can be very powerful to understand what exactly goes wrong in diseased cells, and at which time-point. By using these, a long-term analysis of the changes and processes happening inside a cell can be captured. Nano-tweezers could also be used to monitor the cell response to different drugs. DNA from individual cells can be analysed over time to find when and where mutations contributing to disease progress occur.7 This could give us unprecedented insight into the pathogenesis of various diseases by performing procedures like nanoscale biopsy on cells such as cancer cells.

Manipulating light and electricity to control these nanoscale tools has already created developed understanding of cell processes. Applications in medicine, materials and beyond may be achieved with this technology in future research.

Miriam graduated in Molecular and Cellular Biology (Hons) at University of Glasgow and is now a PhD student in translational pharmacology at the University of Glasgow. Her research aims to understand the impact of pharmacologically activating M1 and M4 muscarinic receptors for treatment of Alzheimer’s disease. In her spare time, she is very active in the social network; she is also a skier and dancer since she was little. In the meantime, she would always be on Netflix and be up to date in EVERY TV show!