Transport, social media, smart phones… plastic? Can society live without plastic? This is a question that remains difficult to answer. It has become so ingrained in the way we live. Toothpaste caps, plastic straws, cups, clothes, plugs, sandwich bags… if we look around it’s difficult to find something that doesn’t contain any plastic – go on, try it. We can, and should, be impressed with the sheer versatility of this product and how it has improved the way we live. Considering the mass production of plastics only truly began in the 1940s and 50s, it is quite remarkable the impact it has had on the modern world1.

However, as Newton’s Third Law tells us, every action has an equal and opposite reaction. In this case, the positive, convenience in packaging products and electronics that plastic has provided to society has a cost to us and everything else we share the planet with. With plastic becoming the hot topic of environmental conversation, it finally feels as if the magnitude of the problem is hitting home.

We are a wasteful generation, and our waste is becoming the natural world’s poison. Scientists have quantified the effects of plastic in the animal kingdom – in a 2015 study it was discovered that at least 690 species had encountered marine debris, 92% of which was related to plastic waste2. In another study, UK researchers examined 34 species of seabird and discovered that 74% have ingested plastic. This research involved the study of colonies in Northern Europe, Russia, Scandinavia, Greenland, the Faroes and Iceland 3. Further investigation revealed that this is a result of algae growing on the plastic secreting a similar smell to krill, which the marine life typically consume 4. This causes them to starve to death, as they feel full but do not get any nutrition from the waste they consume. 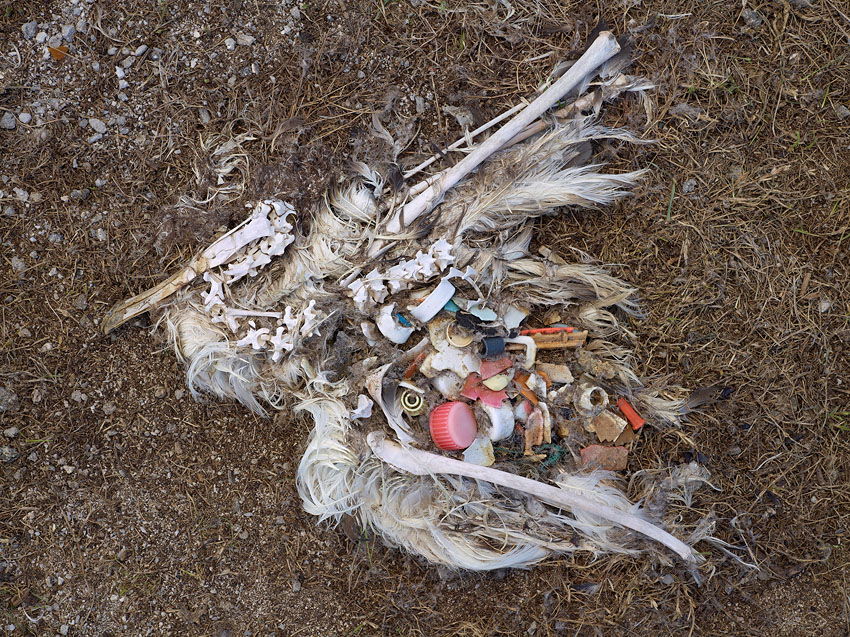 A deceased albatross, found in the Midway Atoll, 2,000 miles away from the nearest continent. Credit: Chris Jordan National

It’s affecting us too in many different ways. Rivers are blocked in Indonesia by ‘plastic-bergs’, preventing transport and essential fresh water from reaching towns. Even the army has been called in to help with the problem  5 Closer to home, plastic is building up in UK recycling plants as China bans imports. This leaves councils struggling with a problem that is not going to disappear anytime soon without drastic changes to waste policy 6.

What actually are plastics?

Plastics are made up of long molecules of repeating units, called polymers. In essence, this can be viewed as the DNA of plastic. The polymers are connected to one another, increasing the strength of the plastic and giving it the properties that make it so useful to us. All man made polymers, and plastics, are initially created by fractional distillation of crude oil. The fraction used for the manufacturing of plastic is Naphtha. Poly Ethylene Terephthalate (PET), one of the most commonly produced plastics, is generated by reacting raw materials taken from the Naphtha fraction with terephthalic acid and ethylene glycol 7.

Polymers also exist in nature, in plant cellulose and starch, and proteins in food. Unfortunately, the biggest difference between naturally occurring polymers and synthetic polymers are their biodegradability.

The War on Plastic

The latest from the frontline on ‘The War on Plastic’ is that the UK throws away 8.5 billion plastic straws a year 8. The average weight of a plastic straw ranges from 0.2 – 0.5 grams, which means we are throwing away approximately 17,000 tonnes of plastic straws annually. It seems substantial and is exceptionally wasteful, but in the grand scheme of the problem we face, this single battle will certainly not win the war. Here’s a look at the numbers we are really up against.

Numbers from the journal article: Production, use, and fate of all plastics ever made. Credit: Geyer, R., Jambeck, J.R. and Law, K.L., 2017.

5.2 billion tonnes of plastic have been discarded as waste historically. This is the true scale of the problem that we face. To put this in perspective, the weight of all humans on Earth is 316 million tonnes, and we have thrown away 15 times this amount in plastic waste over the years 9. So, with this in mind, assuming we are able to overcome the wily foe that is plastic straws, what do we do with the other 5,199,983,000 tonnes that will still exist as waste at the end of the year?

Reduce, Reuse, Recycle – you have probably heard this said a lot in the last 10 years, but there is nothing that suggests that converting the plastic to its raw materials is an option. Fear not – scientists have stumbled upon this exact process of turning PET back to terephthalic acid and ethylene glycol.

Introducing Ideonella Sakaiensis, a bacteria that was discovered by a team of microbiologists from Kyoto Institute of Technology and Keio University 10. The bacteria, discovered in the wastewater near and in recycling locations in Japan, has the uncanny ability to consume PET. It uses two separate enzymes, PETase and MHETase, to reduce the plastic into an energy source for its growth.

Something so curious deserved further investigation, and a team from the University of Portsmouth and the US Department of Energy’s National Renewable Energy Laboratory collaborated on further research. While identifying the structure of the enzymes, they accidentally engineered an even more efficient enzyme than what nature had already provided. This mutant of PETase has the added appetite for an additional plastic, PEF 11. The hope is that by continuing to optimise the protein as far as possible, the millions of tonnes of PET waste that already exists in our environment can, overtime, be broken down back to its raw materials. This would allow for legitimate recycling of the products required to manufacture PET in the first place and prevent the increasing risk of microplastics building up in our environment.

Currently, only PET and PEF have been identified as a “consumable” plastic. However, with the continued study of these fascinating proteins and enzymes that exist, or will come to exist, scientists hope to identify pathways to breakdown all the plastic waste that exists on our planet. Years into the future, we could be looking back at this discovery made from sludge located at a recycling centre as one of the most important in the fight against plastic waste.

The next stage is to investigate whether an industrial process can be created of a sufficient and efficient scale to overcome the surplus of plastic that we create and use at the moment. What would it look like? Would countries even buy into such a solution? The only sure point is that we must reduce the amount of plastic that is currently generated. As fossil fuel resources become ever scarcer, and the plastic waste pile continues to grow, the potentially irreversible damage caused as a result of them becomes ever more evident and drastic.

This article was specialist edited by Chirsty McFadyen and copy-edited by Kirsty Callan.

I am 27 years young with a love for all things sport related and the environment. Spare time is spent studying, playing rugby or finding a nice hill to climb.