We rely on vision more than any other sense to interact with the world. On first impression, it seems that vision gives us a rich representation of our surroundings. However, a big part of what we see and perceive is actually a reconstruction formed by our brain. This means our visual world looks stable and high-resolution despite shadows, occlusion, missing details and blinking disrupting coherent visual input.

Perhaps the most striking example of the brain’s manipulation is the retinal blind spot. This blind spot is located in the retina within the eye where the optic nerve leaves the eyeball and transmits information to the brain. Here, there are no photoreceptors (the cells sensitive to the light coming into the eye) because the space is taken up by the optic nerve. This means that you are never receiving any input about the visual scene from that point of the retina. Located in the periphery, most of the time we do not notice our blind spot unless we are specifically looking for it (see Figure 1). This is the brain’s reconstruction and “filling-in-the-gaps” mechanism at work. Although the images formed by our brains may not be as accurate as those captured by a high-quality camera, they fulfil the most important function of all: allowing us to interact effectively with the world.

Look at the black cross with the right eye while keeping the left eye closed. At a certain distance from the screen, you should find that the red circle disappears from view, when it falls inside the blind spot.

Filling-in the missing features is useful to give us a coherent perception of the world, but if the information within the blind spot is just an illusion, then it shouldn’t be used by the brain for making important perceptual decisions, right?

A recent study by Benedikt Ehinger and colleagues1 uncovered an interesting phenomenon while studying this question. Participants in the study looked at two large striped circles, one for each eye, either centred over their blind spot regions (measured individually for each person at the start of the study), or viewed with “intact” portions of the retina. The circles were presented either both in the blind spots, both in the normal retina or a mixture. In some trials, at the centre of this circle there was a small target (see Figure 2). In the normal retina the small central target would be seen, while for the blind spot conditions, the central region would be filled in with the surrounding stripes making the target invisible. 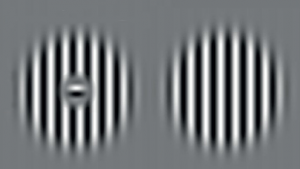 Example of the stimuli used in the original study: the circle on the left shows the small central target. License: Adapted from the original paper under CC BY 4.0.

The task involved the subject deciding which eye’s circle had more homogenous, smooth stripes, not interrupted by the small central target. In conditions outside the blind spot, this task was trivial. The most interesting findings came when one circle was placed over the blind spot. Of course, when a target-free circle was displayed as the intact stimulus, the optimal strategy would be to always pick this one, which definitely doesn’t have the target, over the alternative stimulus because it is impossible to predict whether a target is present inside the invisible blind spot. However, the findings surprised the researchers: during ambiguous trials where there was no central target and hence both circles were smooth, subjects were more likely to say that the one in the blind spot was smoother, compared to the one in the normal retina.

So, it seems that the filled-in illusory stripes can be treated as more reliable and a ‘better’ representation of the stimulus than actual ‘true’ information from the eye. Illusory information is not just a helpful guess to the true nature of the stimulus, but is in fact treated as the real stimulus. This finding is important in helping researchers understand how the brain combines seen and inferred information about the visual world.

It remains to be seen how far our visual system can be tricked, but for now, don’t trust everything you see!

Black scientists have been historically underrepresented in science. But now we're living times of change. For @NatureMedicine, I spoke with the founders of four ‘#BlackIn...’ inspiring movements to learn how they are empowering the Black scientists. https://www.nature.com/articles/s41591-021-01315-8

Join the #GlobalScienceShow for an introduction to making a #scicomm video!

Our previous editor @wesenkat is now a Science Communications intern at NASA! Read her latest interview with David Des Marias: