The Wasting of Nuclear Waste- Challenging the Status Quo

Nuclear waste is, just like the nuclear issue at large, often misunderstood and filled with prejudice. The issue has never been more pertinent, especially with nuclear power being more commonly viewed as an important tool to fight climate change. Therefore, let’s shed some light on an issue that is often regarded as a problem without a solution, posing a threat for countless generations to come.

A good starting point for understanding the complexity of nuclear waste is to first explore radiation. Radiation is a natural phenomenon. For every moment of our existence, we will be bombarded with radiation from many different sources, the vast majority of which are entirely natural. There are two basic forms of radiation: ionising and non-ionising. Ionising radiation carries enough energy to interact with atoms, affecting their composition and creating charged (ionised) particles which can be biologically hazardous. Examples of ionising radiation include x-rays and gamma rays. On the other hand, non-ionising radiation, such as micro- and radio waves, does not contain enough energy to create ions.

Our sun is constantly showering Earth with radiation in the form of visible light, ultraviolet and infrared, but these are not the only sources of radiation from space. Cosmic background radiation from outside the solar system is another significant source of radiation we encounter daily. On average, a human being will be subjected to 2.4 mSv (millisievert) every year of natural background radiation, though this changes depending on location and altitude. By means of comparison, the annual average dose the general public receives from a nuclear power plant is 0.0002 mSv per year, 10,000 times smaller than the radiation we naturally receive [1.].

So what is radiation? It is essentially the transmission of energy. Radiation can exist in different forms, either as waves or as particles. The type of radiation produced in the nuclear fuel cycle is a result of the formation of unstable atoms. These unstable atoms are formed when uranium (or other fuels) atoms are split in a reactor. In an effort to reach a stable state, these atoms produce highly ionising alpha and beta particles as a means to release energy from the nuclei. The rate of decay is measured in half-life, i.e. how long it takes for half the nuclei to decay to the next step in the decay chain. 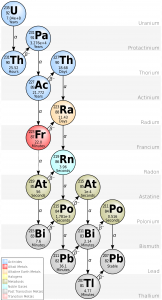 The decay chain of uranium, showing its journey towards its stable form – lead

The half-life of different isotopes can vary immensely, ranging from a tiny fraction of a second to the age of Earth itself. The shorter the half-life, the higher the radiation. A useful rule of thumb should be carried forward – after 10 half-lives the radiation will have, in practical terms, disappeared completely.

To generate energy, nuclear power plants use nuclear fission, which is the splitting of atoms. Most nuclear reactors use uranium atoms as the ‘fuel’, and when the atoms are split, a huge amount of energy is released in the form of heat. This heat is subsequently used to drive turbines, as in most conventional power stations. As well as producing a lot of heat, neutrons are emitted when splitting uranium atoms, which then go on to collide with more uranium atoms and the cycle becomes a chain reaction. 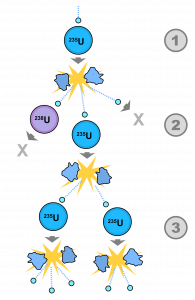 Nuclear waste is what remains at the end of the nuclear fuel cycle after this fission process has taken place. After having been inside a nuclear reactor, the waste can either be recycled (though this is very rarely the case) or sent off for disposal. There are other types of nuclear waste, with different levels and types of radiation. However, these are outside the scope of this article. Waste from nuclear power plants is classified as HLW (High-Level Waste) with significant levels of radiation and requires storage for long periods of time.

After being used in the nuclear reactor, the fuel will have slightly changed in its composition. Depending on the time spent in the reactor, only 1-3% of the uranium will have been used. The ‘spent nuclear fuel’ (the term for the material left after the nuclear reaction) will contain 95% uranium-238, which can be used further as fuel in other types of reactors. There is also around 1% of both uranium-235, plutonium and other actinides (heavy, radioactive elements, most of which are unstable and synthetic), which can also be used in certain ‘unconventional’ reactors. The remaining 3% will be a plethora of fission products, for example iodine-129, caesium-137 and technetium-99. These pose a threat to human health due to their long half-lives, and mobility in the biosphere if leaked. This is where an important problem in nuclear waste management appears – what do we do with the waste, given that it cannot be used as fuel like the actinides? Do we dispose of it as it is in nuclear waste depositories, or do we try to reprocess it and make it less dangerous?

The current status quo approach is that after having been used once, spent nuclear fuel should be sent off to geological depositories to be stored until the radiation no longer poses a significant threat to the biosphere. This will take millions of years, much longer than any civilisation we have ever seen. With this approach, the nuclear legacy is not measured in hundreds, or even thousands of years, but rather in hundreds of thousands of years or more. No geological depository has ever opened as these projects are usually fraught with political opposition. This approach puts an undue burden on countless generations to come and as such is an unsustainable and improper solution. But are there any other solutions?

Reprocessing of spent nuclear fuel is a process that separates the remaining fuel from waste products, and it is not a new technique. It has been used since the Manhattan project with the aim of separating out plutonium to be used for nuclear weapons. The main reprocessing technique used today is called PUREX (Plutonium Uranium Redox EXtraction). However, given that it can be used to extract pure plutonium, this type of reprocessing potentially poses a significant proliferation threat. It also does not address the waste issue at hand because it’s only useful for extracting plutonium, there are still a vast number of radioactive isotopes present in the spent fuel. Despite this, different reprocessing techniques can be very useful. Enter electrorefining pyroprocessing.

This mouthful of a term was developed as a part of the Argonne National Laboratory’s Integral Fast Reactor (IFR) project as a way of addressing the nuclear waste issue whilst harnessing the true power of uranium and plutonium. The very nature of fast reactors allows for plutonium and other actinides such as americium (another current waste stream) to be used as fuel, removing a considerable chunk of the waste. Further to this, IFR allows the uranium unusable for conventional nuclear power plants to be used as fuel, greatly increasing the fuel available. The pyroprocessing technique is much more proliferation-resistant than PUREX thanks to the presence of actinides making the fuel extremely radioactive. This makes it virtually impossible to divert material for nuclear weapons.

After reprocessing, nuclear waste depositories will still be needed but the quantities will be greatly reduced. There will no longer be a need for storage of huge quantities of waste for aeons, but rather a small amount for 300 years, a much more viable task. After 300 years, ten half-lives for strontium-90 and caesium-137 will have passed, thus ensuring that they pose no threat to the biosphere. The long-lived fission products (mainly technetium-99 and iodine-129) are of low concern, given their low levels of radiation and long half lives.

The importance of a sustainable solution to the nuclear waste issue should not be underestimated. Research into public attitudes relating to nuclear power clearly highlights waste as one of the main concerns regarding nuclear power, but also hampers its growth potential. The technical solutions do exist, as proven in different projects around the world. It is high time for politicians, industry and other stakeholders to come together and, unlike in the past, abandon their short-term approach to nuclear waste. Pilot plants to prove the concepts on a commercial scale should be established as a matter of urgency. If this takes place, nuclear power can have a sustainable future and persuade the general public of its essential role in fighting climate change.

John Lindberg is the deputy editor of Darrow, the former UK representative and Secretary-General to the Young European Council's Energy & Climate Change Committee and has worked as policy adviser in the Scottish Parliament. As an ardent believer in nuclear power, John frequently speaks at conferences and events, making the argument for modern and sustainable nuclear in order to mitigate climate change.