When Brain Glue Fights Back

Neurons get a lot of attention. Each one of us harbours roughly 100 billion of these specialised and highly interconnected brain cells which govern our inner worlds and actions. It is much less well-known that another type of brain cell exists in equal (or indeed, much greater 1 ) quantities. These often overlooked cells are not only essential for the survival and maintenance of neurons, but have also been implicated in their demise.

Glial cells (or glia), named after the Greek for “glue” are often thought to do just that: glue the central nervous system together. More specifically, glia were thought to physically surround and protect neurons, without any ability to influence brain function themselves. But we are now learning that tiny glial cells, called microglia, play a vital role in protecting the brain from infection and enhancing its performance. Microglia tidy up the waste left over when unhealthy cells die, engulf and digest circulating pathogens in the brain, and also act to sever superfluous connections between neurons. This prevents an overgrowth of these connections and allows for optimum nerve transmission. Astrocytes, a type of brain cell that have a star-shaped appearance from which they derive their name, are even more crucial for brain health than their microglial counterparts. They are involved in moderating the connections that neurons form with one another at synapses, which are the junctions between nerve cells. During the chemical and electrical exchanges that occur during synaptic transmission, astrocytes surround the synapse and participate in this exchange by releasing their own chemical transmitters. This has led neuroscientists to describe these brain synapses as three way or “tripartite” synapses, acknowledging the important role of astrocytes in neural activity. Such revelations have thrust astrocytes and other glia into the limelight in recent years.

Importantly, despite their recent rise to (relative) fame, glia were always considered to be the good guys; the unsung cellular heroes of the brain that quietly save the day! But how does this role fit in with the recent, and potentially groundbreaking, suggestion that microglia and astrocytes team up to kill neurons and contribute to neurodegenerative diseases? In 2012 2 , new research emerged that described how astrocytes can be reactive in the brain in two ways: one destructive, one protective. Astrocytes in the so-called A1 class act to kill neurons through the release of neurotoxic substances, while those in the A2 class have been shown to repair neuronal connections through the release of neuroprotective molecules.

But how do the good guys turn evil? In a recent study 3, scientists discovered that astrocytes turned to the dark side when activated in response to inflammation by the unsuspecting microglial cells. Researchers made use of an experimental mouse model in which the mice do not have any microglial cells in their brains. They found that without microglia, there was no activation of A1 astrocytes, indicating that the interaction between these cell types is essential for this activation. We also know that the number of microglial cells increases in several neurodegenerative diseases, so researchers went on to investigate whether A1 astrocytes could be found in these conditions as well. Indeed, they found an abundance of A1 cells in the brain tissues of patients with Alzheimer’s disease, Parkinson’s disease and multiple sclerosis.

Researchers also tested what happens when normal brain cells are exposed to A1 astrocytes in the laboratory. They found that A1 astrocytes caused motor neurons and nerve cells in the visual pathway to die, and they also proved toxic to another type of glia known as oligodendrocytes. These particular glial cells produce myelin, a fatty substance that wraps around the neuronal connections in our brain and allow them to communicate effectively. In multiple sclerosis, this protective sheath of myelin degenerates, which causes brain communication to slow down and ultimately causes neurons to die.

Uncovering the role of astrocytes and microglia in neurodegenerative pathologies could lead to breakthrough discoveries that will help us to understand these diseases on the molecular level and develop effective treatments. For Alzheimer’s disease in particular, current treatments target protein clumps known as amyloid plaques, which essentially clog up the brain and prevent neurons from communicating. However, it is intriguing that these amyloid protein plaques are strong activators of microglia, which we now know can in turn activate the harmful A1 astrocytes. This suggests that the interaction between amyloid plaques and brain cells may be an important step in the development of this disease.

There is still a multitude of research to be done in this area to confirm and explore these findings further before we can translate them into therapeutic strategies that will benefit patients. A priority for future research will be to identify the specific neurotoxin that is released by A1 astrocytes and develop a targeted drug against it. But it’s unlikely to be as simple as it sounds. We need to remember that glial cells generally have a supportive role in the brain, so it seems unlikely that we have evolved to harbour rogue glial cells destined to destroy our brains. These astrocytes may kill brain cells for good reason, to protect us from unhealthy or dysfunctional cells, for example. We can draw a parallel to autoimmune conditions, where an individual’s immune system that normally protects them from disease, accidentally turns to fight against the body’s own cells. A1 astrocytes may have a similar protective function in the brain under normal conditions, and targeting them with drugs may compromise the immune system of our brain. 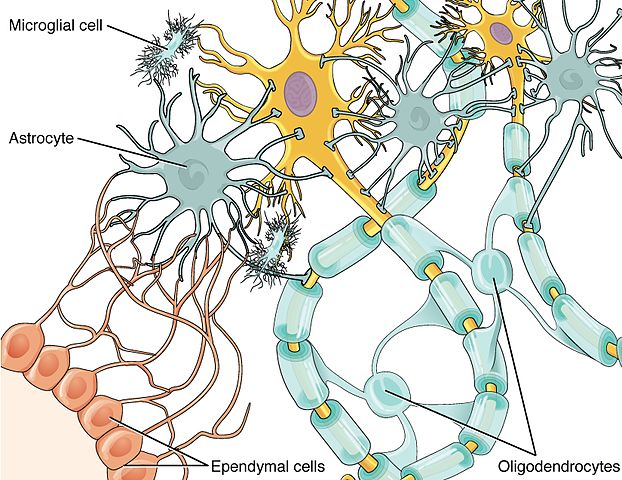 Though it creates many new questions, this new research has lead to a better understanding of the interaction between the immune system and our brain, and points towards many new avenues to explore!

This article was specialist edited  by Alisha Aman and copy edited by Jiska van der Reest.