European Jellyfish Stings: To Pee or Not to Pee, That is the Question

When most people think of jellyfish stings, they recall ‘Friends: The One with the Jellyfish’. This classic episode, in which Chandler pees on Monica to suppress the pain, helped lead to the increased reputation of this anecdotal myth. Unfortunately (and fortunately), this is not the case. Originally, urine was believed to be a beneficial treatment as it contains ammonia and urea which can suppress the pain of stings at particular concentrations, however, the other components present in urine have a detrimental effect as they trigger further release of venom from stinging cells still present on the skin.

Jellyfish stings have become a familiar summer hazard with an increase in people partaking in water activities at this time of year. Their stings have been found to mainly cause skin irritation, such as a burning pain and itching. However, more severe symptoms can occur on rare occasions following the stings of large, highly venomous jellyfish, which can result in cardiac or neurological complications due to the venom entering the bloodstream. The species that can cause a nasty sting in European waters are the Lions Mane jellyfish (Cyanea capillata), the Mauve Stinger (Pelagia noctiluca), the Sea Wasp box-jellyfish (Carybdeas marsupialis) and the Portuguese Man-o’-War (Physalia physalis), all of which are found with varying frequency throughout Europe. The majority of common jellyfish species found in European waters – the Moon jellyfish (Aurelia aurita), the Upside-down jellyfish (Cassiopea andromeda), the Blue jellyfish (Cyanea lamarckii) and the Barrel jellyfish (Rhizostoma pulmo) – are often harmless or only cause a mild rash.

All jellyfish have the potential to sting, however, some species are more dangerous to humans than others. This is not only due to the potency of the toxin they possess, but also because of the length of their stinging harpoon. If the harpoon is able to penetrate the thick skin of a human, a sting will occur, causing a reaction. 1. Jellyfish venoms are a concoction of toxic molecules, yet their true compositions are still unknown. This is by virtue of the crude venom proving difficult to isolate from the gelatinous composition of the organism.

Jellyfish do not only pose a stinging threat in the water through direct contact with the whole organism or from their separated stinging tentacles, but also when they are stranded onshore. A jellyfish that is no longer living still has the potential to cause envenomation, although at a slower rate, and perhaps with less severity. Dried nematocysts on materials that are subsequently moistened can cause a sting due to a change in osmotic concentration. As a result, there is always the threat of envenomation when there is some degree of contact with jellyfish. Apparently harmless jellyfish species, such as the common Moon jelly, have also been found to cause relatively mild cutaneous reactions in some individuals, thus, it is advisable to avoid touching and handling any jellyfish species with bare skin.

Species that are found to cause a mild sting in European waters can conversely give off quite a nasty sting elsewhere in the world. The Moon jellyfish is now referred to as either “New World” or “Old World” Aurelia aurita following the emergence of a new more toxic species from the “Old World” jellyfish. Environmental factors such as temperature and prey availability are hypothesised to play a role in the potency of jellyfish stings due to a form of evolutionary adaptability and alteration in the composition of nematocysts. Consequently, a single species can have differing sting abilities and potency depending on the area it inhabits, which adds further difficulty in the creation of a jellyfish sting treatment 2. 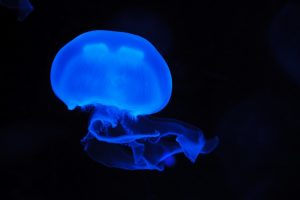 After an unpleasant jellyfish sting, many people experience swelling and itching, so they start popping antihistamine pills with the belief that they are having some form of allergic reaction. However, these symptoms are more often caused by a toxic response, similar to that seen with cyanide toxicity. An allergy-induced response of angioedema or anaphylaxis will only result if the victim has previously been stung by a species that possesses a similar toxin makeup. Thankfully, those are rare cases!

The media often tries to portray the idea that there is a simple quick fix for jellyfish stings. Claims of remedies such as meat tenderiser, urine, perfume, alcohol and Coca-Cola as effective sting treatments are insufficiently underpinned by scientific findings. I, for one, have fallen for the “alcohol cures all…one for me, one for the sting” ideology. Vinegar is another common anecdotal treatment that has been recommended for the past 40 years; however, it should only be used on box jellyfish stings found in the Mediterranean Sea and European Atlantic waters 3.

Scientists have identified the need for species or genus specific envenomation treatment due to the complexity and variable efficacy of treatments on the stings of different species. Yet, due to the inability to identify the active components within jellyfish venom, and the difficulties associated with establishing an effective method to test the efficacy of treatments, jellyfish sting treatment is incredibly under-researched and still poorly understood. Several studies have identified differences between the biological activities of nematocyst venom compared with tentacle-only extract, leading to false-positive results when trialing first-aid treatments. However, earlier this year Yanagihara and her lab in Hawaii developed a method to assess the efficacy of topical first-aid treatments on the stings of Australian species with the use of mock skin (composed of red blood cells suspended in agarose gel and covered with porcine intestine) and live stinging tentacles. This model should be implemented to investigate other species-specific treatments, as it removes the variation previously identified with the use of venom extract mixed with other compounds from the gelatinous makeup of jellies 4.

Although species-specific treatment is currently the way forward, it is usually unlikely that you’ll be able to see what has actually stung you, let alone identify the species.  So, here we have a step by step protocol of what to do if you get stung in Europe this summer: 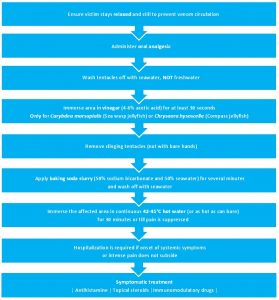 Now you’re equipped with this knowledge, you’ll never have to pee on someone again…unless of course, that’s what you’re into, or it’s a Friday night on the town gone wrong. 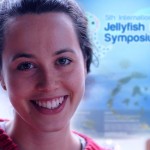 Louise Montgomery has spent the past year working at Flanders Marne Institute in Belgium researching European jellyfish and will be returning to Scotland to finish her MSci Zoology degree at the University of Glasgow. She is interested in how art can encourage environmental awareness, influence change and deepen appreciation for the natural world.