Electricity, the key to reversing the effects of stroke?

Strokes are familiar to most people; it is thought of as something horrible which happens to the brain, reduces quality of life and requires a long journey of recovery. Technically speaking, strokes occur when a part of the brain receives too little oxygen-rich blood, causing the tissue to become damaged. Blood flow to the brain can be impaired if there is a clot impeding blood supply or if a blood vessel bursts, causing blood to leak away instead of keeping true on its route to nourish the brain.

If blood flow is impeded for even a few minutes, brain tissue undergoes irreversible damage. The brain responds in this rather dramatic fashion as it requires more oxygen per unit volume than any other organ in the body in order to carry out all of our higher and subconscious functions. For this reason, coupled with the fact that brain cells are not able to naturally replace themselves following damage, a person’s personality and ability to carry out basic everyday functions are often permanently impaired following a stroke. Alarmingly, strokes are one of the biggest causes of disability worldwide. 1

While some recovery of function is possible, stroke sufferers are not currently spoilt for choice when it comes to rehabilitation solutions. If mobility is affected, physiotherapy can be used to train affected muscles and draw them out of a paralysed state to increase function. If language is affected, speech therapy can be provided to attempt to regain the ability to communicate. If the stroke affects the person’s psyche, psychiatric drugs may be prescribed, however none of these therapies attempt to treat the brain itself, instead they merely manage the symptoms.

A perhaps more novel solution to recovering lost function following a stroke is by using a type of non-invasive brain stimulation involving an electric current. This is known as trans-cranial direct current stimulation, or tDCS. It does what it says on the tin – the method of treatment involves placing electrodes on the patient’s scalp, passing a continuous small current (generally 1-4 milliamps) through the brain for a short time. Theoretically, it aids recovery by altering the brain’s own electrical activity. This makes more sense when we consider that when brain tissue is damaged during a stroke, brain cells die, so are unable to send messages to each other via electrical impulses. The body then attempts to correct this (albeit unsuccessfully), so parts of the brain on the unaffected hemisphere ramp up the electrical activity between brain cells, resulting in asymmetry between the affected and unaffected sides of the brain. When tDCS is applied, if a cathodal electrode is placed over the unaffected side and delivers current, it reduces the electrical activity in that area as it is negatively charged. This re-establishes symmetry between the two hemispheres of the brain and facilitates better communication between brain cells, ultimately restoring a lost function. On the other side of the coin, if the anodal electrode is placed over the affected side, it will increase electrical activity of neurones in the area, which also improves symmetry and outcome. It all seems simple enough, but to date there are relatively few examples of this method being used in stroke. 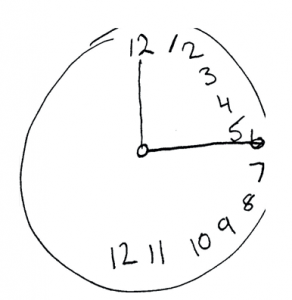 A classic test for hemispatial neglect is asking the patient to draw a clock face. All of the numbers will be drawn on the right side as the person is completely unaware of the left side of their visual field”. Credit: Dhru4you via WikiCommons.

Despite use of tDCS in stroke being fairly new, the concept of using an electric current to aid maladies of the brain dates back to 43AD when Galen, a physician to the Roman emperor, used electric torpedo fish to cure headaches 2. More exploratory historic experiments on animals using tDCS have included passing currents through the brain and observing altered motor movement in response to the shock. This early research serves to reassure us that electrical currents do indeed have a very real effect on brain function… but just how effective is its application after a stroke? 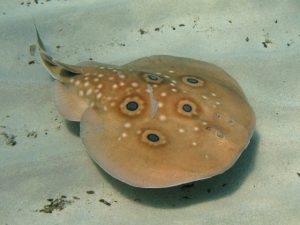 Thankfully tDCS has come a long way and you probably won’t need to experience this guy getting acquainted with your scalp”. Credit: Roberto Pillon via WikiCommons.

There are indeed some cases that boast success from this intervention. Several studies have found that tDCS modulates electrical activity in the motor areas of the brain, restoring function of the upper and lower limb which are often drastically weakened following a stroke. Other studies have found evidence that applying tDCS improves the effects of hemispatial neglect after a stroke. This concerns a particularly odd result of stroke, whereby the sufferer loses perception of one side of their visual field, not by a failure of eyesight but by a failure of the brain’s ability to process visual information. Application of tDCS has been found to expand the visual field, ultimately improving the patient’s perception and navigation of their world.

While tDCS seems full of promise, research is slow due to an unfortunately long list of criteria that disallows patients to receive the therapy. At the moment, it can’t be applied to anyone who suffers from other significant illnesses such as heart disease or cancer, is prone to seizures, takes psychoactive medication or is pregnant. This limits the numbers of patients used in research, which reduces the clout of the research and makes us more inclined to take their ‘breakthrough’ results with a pinch of salt. If patients are suitable for the therapy, there are even more problems in the form of interpersonal differences: variations in skull thickness and hair among patients can affect the conductivity of the electrodes. Additionally, while electrodes are usually fairly large and able to apply current to a considerably large amount of brain cells at once, anatomical accuracy is questionable.

The question must also be asked, is tDCS truly non-invasive? In the sense that it requires no physical incision, yes, but one of the main proposed benefits of this intervention is that it is safe, and while there is evidence that small sessions are, there is currently nothing to suggest that extended exposure to tDCS will not harm the brain. The sheer mystery surrounding the procedure with regards to how it will affect the brain electricity of epileptic individuals, or how it may interact with certain medications, also casts doubt upon the safety of it. Perhaps one of the most disconcerting things about the trial research using tDCS in stroke patients is their desperation for it to work. Often when an exciting new therapy crops up, full of promise, patients can understandably invest a lot of hope in it. With this in mind, it is not beyond the realms of possibility that the restorative effects of tDCS may be partially due to a placebo effect – or due to natural recovery of function that often happens over time, without intervention.

However, it would be impossible and naïve to discredit the growing evidence that tDCS is a positive enhancer of stroke recovery. The physiological reasoning behind the intervention is sound, and while research has been carried out on a limited number of stroke survivors, most have experienced improvement of function. For tDCS to be considered a viable therapeutic option for stroke patients, a great deal of work must be done to better understand its effects on the body. It should perhaps also be made safer and more accessible for the majority of stroke patients, not just those that meet a checklist of strict criteria. This would allow the apparent gate-keeping of the intervention to be reduced, clinical trials of tDCS could be maximised and, if its success was proven, it could be implemented in hospitals, allowing it to be a natural step on the long, arduous road to stroke recovery.

This article was specialist edited by Catriona Thompson and copy edited by Domonic Waugh.

Louise is an Anatomy BSc graduate from the University of Glasgow with an interest in neuroscience and neuroanatomy. She works as a research assistant at the Queen Elizabeth University Hospital and hopes to pursue postgraduate study and an eventual research career in the field of stroke.