ALFALFA (the Arecibo Legacy Fast ALFA [Arecibo L-Band Feed Array]) isn’t just the silliest acronym you’ve read today. It’s also a large-scale radio telescope survey aiming to conduct a census of the local universe 1. The scientists involved published an image of a newly discovered dwarf galaxy in The Astronomical Journal in June 2. The galaxy, Leo P (a.k.a “AGC 208583” to those in the know), is between 1.5 and 2 mega-parsecs (around 50 quintillion kilometers) away from our galaxy, but on a galactic scale that’s pretty close. 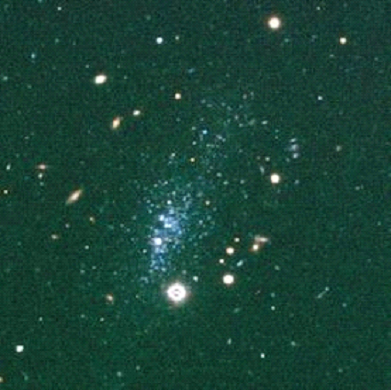 Introducing Leo P, our new galactic neighbour
// Reproduced by permission of the AAS

Nearby dwarf galaxies aren’t an oddity in themselves. A 2012 survey details a list of 100 dwarf galaxies in the Local Group – the cluster of galaxies of which our Milky Way is a member 3. For scale, the Local Group spans 3.1 mega-parsecs and is centred somewhere between the Milky Way and the Andromeda galaxy, which is our nearest spiral galaxy neighbour. That’s a lot of space and so it’s no surprise that we’re finding more stuff within it as time goes on. The rate of detection of dwarf galaxies increases as technologies improve and they are found serendipitously in wide-field surveys and through dedicated surveys. The ALFALFA project is just such a survey.

Leo P is interesting not only for its proximity, though. Generally, as galaxies travel through space, they encounter other galaxies and undergo “collisions.” Stars within galaxies are usually fairly spread out so collisions between individual stars are rare, but the gravitational forces acting on two galaxies are severe and their structure as a whole is left warped and twisted after these encounters.
Dwarf galaxies are defined as small galaxies containing up to several billion stars. A paltry number compared to the Milky Way’s 200-400 billion. Because of their smaller size this leads to their being cannibalised by larger galaxies that they pass. The gas they contain, their star-creating fuel, is stripped from them. This gas is crucial if a galaxy is to continue to produce new stars.

Without the fuel they grow dim and hence dwarf galaxies are notoriously difficult to spot. However, Leo P was detected because it still contains stars, in fact, it contains bright, blue, newly formed stars as well as a lot of ionised gas 4. Galaxies with detectable quantities of ionised gas are rare and often found relatively far away from Andromeda and the Milky Way. It would seem that this little galaxy has been dodging the larger ones for some time. In fact, the “P” in Leo P stands for “pristine” and it is exciting for astronomers to see a small galaxy like this having been left to its own devices 5.

This is a triumph for the ALFALFA project – Leo P is also the first small gas-bearing galaxy that this particular survey has found. In the radio astronomy business these are classed as “almost dark” galaxies because, in spite of containing a few bright stars, they are still comparatively dim and because the light detected from them is not in the visible range of the spectrum. Detecting them based on their radio signals is part of what ALFALFA was designed for. However, it is hoped that ALFALFA will also be able to detect truly dark galaxies; objects with no stars at all – only hydrogen gas and dark matter. Such objects have been theorised, but so far none have ever been found, so it’s encouraging that it has been possible to find a dim galaxy like this one.

There is speculation that this may be the lowest mass and luminosity of any star-forming galaxy known and it will certainly invite further study. Its discovery suggests the possibility of other small galaxies “nearby” that we simply haven’t spotted yet. The ALFALFA survey has now completed its 7 year search across a 750 million light year range, during which it was expected to find approximately 20,000 galaxies. The project is currently in the data analysis stage and more exciting results are bound to show up soon.