Cell factories are all the rave in the field of biotechnology at the moment. Growing concerns about climate change and depleting fossil fuel reserves have pushed governments and scientists to search for sustainable solutions. One possibility is the development of a “bioeconomy” in which renewable biological resources (plants, fish, animals and bacteria) are used to produce food, materials, and energy.

Bacteria are already being used to produce everything from biofuels and plastics, medicine and food supplements to cosmetics. They make attractive cell factories since they are relatively simple organisms, which don’t compete for the resources necessary for agriculture like arable land or freshwater. Bacteria also don’t pose much of an environmental risk since they are easily contained within sealed bioreactors.

This industry is already showing great promise. In the financial year 2013/14 alone, there were 225 companies employing 8,800 people, generating £2.9 billion in sales revenue and £1.5 billion in net exports 1.

Factories need energy to run, and in the case of cell factories, sugar is the fuel. Through a process called cellular respiration, sugars are converted into chemical energy, as adenosine triphosphate (ATP), that is used to drive the production process. Carbon dioxide, CO2, is released as a by-product of cellular respiration, which doesn’t help towards the goal of reducing carbon emissions! At the moment, most cell factories are fuelled by sugars from corn, sugarcane and wheat. Biofuel production, for instance, relies heavily on grain stocks which has unfortunately resulted in the recent increases in food prices – an unwelcome side effect for us consumers.

So how is sugar made? Essentially, sugar is produced by photosynthesis, the process whereby light energy, captured by pigments such as chlorophyll, drives the conversion of water and CO2 (from the air) into glucose and oxygen. Given that photosynthesis produces the sugar that fuels the factory, it makes sense to combine the two and have photosynthetic cell factories.

There are three main groups of photosynthetic organisms: plants, algae and cyanobacteria. Plants aren’t an ideal production platform as they require both land and freshwater which we need for our food. Algae and cyanobacteria, on the other hand, can be grown in a wide variety of water sources including seawater and even sewage. A global effort is underway to develop both algae and cyanobacteria into solar-powered cell factories which have the added benefit of removing some of the CO2 from the atmosphere.

Sugar is actually an interesting product in itself. Sugars come in all sorts of forms, from simple monomers like glucose to complex polymers like chitin which makes up the shell around crabs and prawns. Algae and cyanobacteria also have “shells” called exopolysaccharides, or EPS, which are a complex mixture of mostly sugars with some protein and fats. EPS serves as a protective shield which enables them to survive in all sorts of environments, from vast oceans to Antarctic deserts. EPS is a dynamic shield, which is able to adjust itself to best defend against the ever-changing dangers in the immediate surroundings. Sugars purified from EPS have a wide array of potential applications such as removing toxic metals from waste water or as a thickening agent in paint 2.

Like any factory, cell factories need to efficiently produce large quantities of the desired product to stay in business. There are two main ways in which this can be achieved. First, the conditions in which the cells are grown can be controlled to encourage the cells to make the product of interest. For instance, since EPS is a dynamic shield that responds to its surroundings, adding or removing certain elements in the environment can result in more or less of a particular sugar. Secondly, the cells can be engineered to overproduce the product of interest. By activating the genes necessary for production and silencing ones which hinder production, the efficiency of the cell factory can be dramatically improved. Alternatively, cell factories can be engineered to produce things they would otherwise not make, including synthetic products not found in nature. 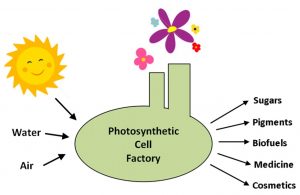 Cell factories driven by the power of sunlight through photosynthesis can turn simple inputs such as water and air into a wide array of valuable products in a sustainable and environmentally-friendly manner. Credit: Mary Ann Madsen

Now the cell factory is efficiently up and running, we need to harvest our product. There are three places the product can end up: inside the cell, physically attached to the outside of the cell, or freely floating in the solution outside of the cell. The easiest harvesting option is when the cells export the product into the solution, or media, in which they are grown. In this way, the cell factory can work away, undisturbed, to make the product which is simultaneously removed from the media.

It would be wasteful to throw away damaged cell factories once the product has been harvested. In fact, a significant amount of value can still be harvested from the remaining cell material, or biomass such as vitamins, fats and proteins. In the case of photosynthetic organisms, light-harvest pigments make up a significant proportion of the biomass and these are a surprisingly valuable product. For instance, carotenoids produced by both algae and cyanobacteria have antioxidant properties and play a suggested role in preventing conditions such as cancer. Cyanobacteria have additional pigments such as phycocyanin, which is a popular food additive in Japan for its antioxidant, anti-cancer and cholesterol-lowering properties 3.

There are countless options for the development of photosynthetic cell factories to produce goods in a sustainable manner, using simple, renewable inputs like water, air and sunlight while also consuming atmospheric CO2. Pigments and EPS are just two examples that the Amtmann lab at the University of Glasgow is working on in collaboration with two companies based in Oban, Xanthella and Glycomar. For Scotland in general, this kind of technology fits into current government initiatives to promote our hydro nation where we make the most efficient and productive use of our abundant water resources 4. In this way, we may be able to better preserve our delicate environment and hopefully even reverse some of the damage we have done.

Mary Ann Madsen is a postdoctoral research assistant in the Amtmann lab at the Institute of Molecular, Cell and Systems Biology at the University of Glasgow, working to develop cyanobacteria for industrial biotechnology.