Reversing the effects of Alzheimer’s Disease?

Dementia is a neurological disease that affects a number of brain functions, most notably memory. The World Health Organisation, a specialised agency of the United Nations, has estimated that the cost of dementia worldwide is more than $600 billion, which includes not only direct medical costs, but also the price of everyday care associated with it 1. The most common type of dementia is Alzheimer’s Disease, which affects more than 800,000 elderly people in the UK alone 2. As the world’s population of people over 60 is continuously growing, it is important that we understand the mechanisms underlying the disease if we want to develop a cure.

Although a lot of effort is put into researching the disease, we still don’t know its exact causes. Symptoms of Alzheimer’s develop gradually and become more and more severe over the years. Multiple brain functions are affected in those who suffer from it; one of the first signs is problems with memory. For example, people may forget the names of objects and places or even conversations that they have recently had. As the condition develops, other symptoms like disorientation, difficulties with planning and speech problems display themselves. In many cases Alzheimer’s disease also affects the personality of the patient. For instance, people may become more suspicious of others.

The disease affects mainly those over 65 but around 1 in 20 cases involves a person in their 40s 3. Since many people think that problems with memory are simply part of the ageing process, the symptoms of the disease can be difficult to detect. Scientists still haven’t found a cure for Alzheimer’s, but its symptoms can be relieved with the help of medication and psychological treatments.

How does Alzheimer’s Disease change your brain?

One of the most significant changes is that bundles of toxic plaque, which are called beta-amyloid, form within spaces between the brain’s nerve cells. The plaque fills in the synapses that play an important role in passing information between the nerve cells. Because of this, the synapse signals get disrupted and cells can’t communicate information to one another. This means that the brain’s messages get lost, which leads to problems with learning, memory and communication. In addition to that, since the beta-amyloid plaques are perceived by the brain as an injury, an immune response is created in the form of inflammation in an attempt to heal the injury, which leads to even more brain cell damage.

Another important change is related to a protein called tau that can be found naturally in nerve cells. Tau is involved in the transportation of nutrients in the healthy brain but in people with Alzheimer’s, protein threads become tangled which stops this process from occurring. We already know that because of the plaque formation the communication between cells is damaged, and with the tangles further preventing the cells from receiving nutrients, the death of brain cells is inevitable. All of this leads to brain shrinkage. 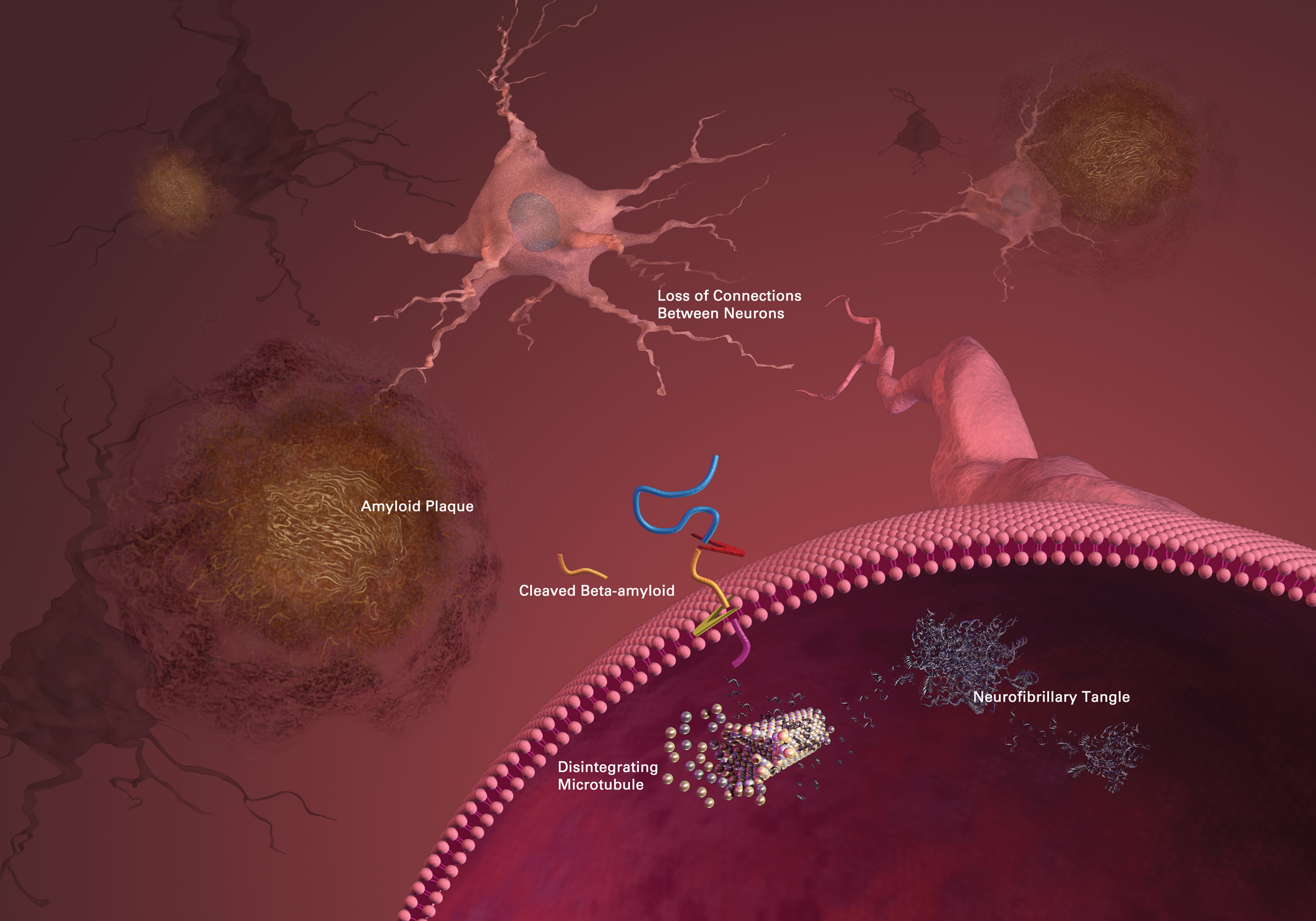 Amyloid plaques and neurofibrillary tangles in the brain of an Alzheimer’s patient. Credit: National Institute on Aging via wikimedia commons.

Can we reverse the symptoms of Alzheimer’s?

Working alongside researchers from Hong Kong, scientists from The University of Glasgow discovered at the beginning of 2016 that an injection of a protein called IL-33 can have a positive effect on the symptoms of Alzheimer’s disease 4. In their experiments, the researchers used mice which were bred to develop the disease as they aged. After daily injections of the protein, the amyloid plaques considered to be the root cause of the disease were cleared. This was shown to have a positive impact on the cognitive decline of the mice, restoring their memory function to similar levels as those observed in healthy mice. And all of this in only one week!

Professor Liew, one of the researchers working on this experiment, explains that genetic studies in European and Chinese populations have shown that there is a connection between Alzheimer’s and mutations in the protein IL-33 in humans. Studies show that patients with the disease contain less of it compared with healthy people.

Although those findings sound very exciting, the researchers behind this project are quick to clarify that the results can be applied only to mice at the moment. It’s not clear whether they can be deemed relevant to humans with Alzheimer’s disease, but clinical trials to test the effects of IL-33 on people are on their way. Even if Professor Liew and his colleagues find that the protein can successfully reverse the effects of the disease in humans like it does in mice, it will take years for the protein injections to be developed into a treatment. The distance between findings in the laboratory and their clinical application is very long, but when you are fighting a disease with no cure which affects millions of people and their families, this is a good start!

This article was specialist edited by Miruna Costreie and copy edited by Nia Linkov.