Polycultures: The more the merrier

A cornfield in Ann Arbor, Michigan, during autumn. Image credit: IShutterToThink via Flickr (CC by 2.0 license)

Currently there are 795 million people in the world that suffer from malnutrition1; this is expected to get worse by 2050, when the population is expected to reach 9 billion2. The old ways of agriculture cannot produce enough food for the growing population. New agricultural practices need to be developed to keep up, one of which is polyculturing.

Polyculturing refers to the cultivation of several types of crops to maximize total biomass; having multiple species forces the plants towards complimentary resource use, increasing biomass3. Different species of crop can enhance the productivity of other plants: legumes can fix nitrogen into a useable form for other growing plants. The increase of biodiversity also increases the number of responses of the culture to invading weeds. As a weed would have to compete with several different types of plants, there would be a decreasing probability that it would have all of the adaptations to resist the multiple plant types already established.

Polyculturing can also mean the cultivation of several different genetic strains of the same species of crop. This is to increase the overall amount of responses of the population to new selective pressures. For example, if all the plants are the same, then a pathogen or pest will affect all plants of the crop in the same way – entire fields can be lost as a result. A well-known example is the Irish potato famine of the 1840s, in which the algal Phytophora infestans decimated the majority of the potatoes. The potato used was called the lumper potato and was propagated vegetatively, which means that all the potatoes used were clones of each other and were all equally susceptible to the blight4. The potatoes provided the population of Ireland with 60% of its food; once this food source was gone, the poorest people that relied on the potatoes were hit the hardest, with approximately 1 million people dead5. 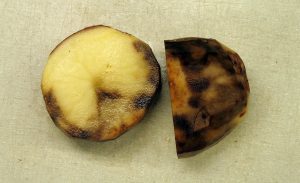 The potato late blight, the disease caused by P.infestans turns non-resistant potatoes into a black, inedible mush. This potato is in the early stages of infection, when the edible core hasn’t yet completely turned to goo. Image credit: benmillett via Flickr (CC by 2.0 license)

However, although increasing biodiversity can increase the productivity of the ecosystem, this eventually reaches a plateau, at which point biodiversity increase no longer enhances productivity6. Polyculturing can also be unappealing to farmers because it means a decreased biomass for the plant they find profitable; a polyculture only increases the overall biomass of the entire system, not of the individual species itself. While polyculturing on its own isn’t going to magically make agriculture better, as a low tech agricultural practice deployed amongst technologically advanced methods, it will help to meet the ever increasing demands put on agriculture.