Despite decades of research, the brain remains one of the greatest enigmas of biology. Just what goes on in that grey matter that makes us the thinking, feeling beings we are? Scientists at the Allen Institute for Brain Sciences in Seattle have just brought us a little closer to understanding. They’ve made the first comprehensive developmental map of a primate brain, and published it as a shared resource for other researchers to use1.

Although we share many of our genes with other mammals (and with fruit flies, for that matter), the times and places these genes are switched on and off during development are critical in turning us into humans. Learning about brain development in monkeys can help us to understand the process in our own species – what makes us smarter than other mammals, and what goes wrong in neurodevelopmental disorders like autism.

The researchers used a combination of MRI scans, laser microdissection and genetic analysis to show which genes are activated in different brain regions at ten key stages of development, from prenatal to postnatal and through to adult. This detailed timeline could hold the key to the unique genetic programs that make us human. It allowed the researchers to compare gene ‘trajectories’ (patterns of activation) in rat, monkey and human brains, and they found that 9% of genes had trajectories that were unique to humans. Many of these genes had prolonged trajectories, staying active far into adulthood. The actions of these genes might explain our advanced intellectual development compared with other species. 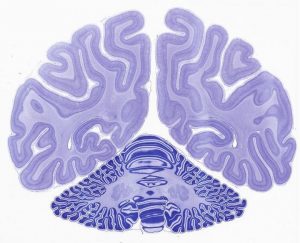 Such a detailed analysis of the primate brain can also be used to study the causes of neuropsychiatric disorders that have developmental origins. These diseases often have complex causes involving multiple different risk genes, so it’s important to identify the aberrant processes rather than studying individual genes. In their analysis, the researchers demonstrated that genes associated with three disorders – microcephaly, autism and schizophrenia – could be mapped to specific brain regions and developmental stages. Using their map, they showed that microcephaly-associated genes are most active very early in prenatal development, whereas autism-associated genes, also active early on, were found in more mature brain regions. Schizophrenia-related genes were active only in mature regions during postnatal and adult development.

These insights just scratch the surface of what this new map can tell us. That’s why the data have been made publicly available online2, so that other researchers can use it to answer new questions about brain development. This step forward will open the door to many new studies into the complex nature of the human mind.