This summer a group of Glasgow University’s female engineering students are embarking on a pioneering project in Rwanda with the aim of encouraging more of the country’s young women into STEM. The eight women from a range of engineering disciplines will be working closely with a team of fellow female engineers at the University of Rwanda, in the capital city of Kigali, as they run workshops for local high school girls over June.

The project ‘FemEng in Rwanda’ first came to life after it was suggested to Ellen Simmons (Glasgow University Engineering Society president and founder of women’s engineering society FemEng) that she run a similar project in South Africa. After consulting with the university’s international dean for Africa, John Briggs, Simmons was advised that launching the project in Rwanda (a country with which Briggs has strong ties) could be more suitable. John felt that that the work FemEng was already doing in Scotland would be beneficial in addressing similar problems with women in stem in Rwanda and that the University of Rwanda would be enthusiastic in collaborating with Simmons’ team. They have since met with several Rwandan officials including the minister for education, the high commissioner, and the cabinet secretary for investment and infrastructure. The project has also received sponsorship from several high profile engineering companies including civil engineering firm CH2M and Western Ferries.

Founded in 2013, FemEng runs social events for female engineering students at The University of Glasgow as well as coordinating outreach events at local schools in the West End. On their Facebook page, the team explain how they have “experienced the rewards and inspiring effect [these outreach events] can have on young minds”. Through the Rwanda Project, the women plan to expand the reach of these workshops and the network of girls with similar aspirations and interests from which they themselves have benefited. Once there, the team plan to organise activities at the University of Rwanda, focusing largely on alternative energy sources, but also including biomedical workshops and kits supplied by the James Dyson Foundation.

Engineering is essential to the development of infrastructure and job creation especially in a growing economy such as Rwanda. The next generation of women and girls are no longer confined to working in the home, especially in the cities, and the country has put a focus on gender balance in senior governmental positions:Rwanda has the highest proportion (64%) of women in parliament in the world 1. Stereotypes of what a woman’s role should be inevitably still remain, but this is true even in our own country where engineering is still a male-dominated industry. It is essential that girls are given the opportunity to explore STEM subjects and the varied, exciting careers to which they can lead. This is true both here in the UK and across the world, and the team believe that the project will provide the opportunity to continue the work FemEng has started in Glasgow on a much larger scale.
But make no mistake, this is not just another case of “voluntourism”. The ultimate goal is for this Rwandan trip to become a springboard for a long-term project between the teams in both Kigali and Glasgow. Over the coming years, women from both universities will work to build a network of support for aspiring female engineers in Rwanda which will follow them through higher education and into the industry. Perhaps a Rwandan branch of FemEng could also be on the cards.

If you would like to find out more about ‘FemEng in Rwanda’ and keep up to date with the team’s activities take a look at their blog 2 and Facebook page 3 or follow them on twitter @uogfemeng. If you would also be interested in supporting the work they will be doing in Rwanda you can donate on their just GoFundMe Page 4. 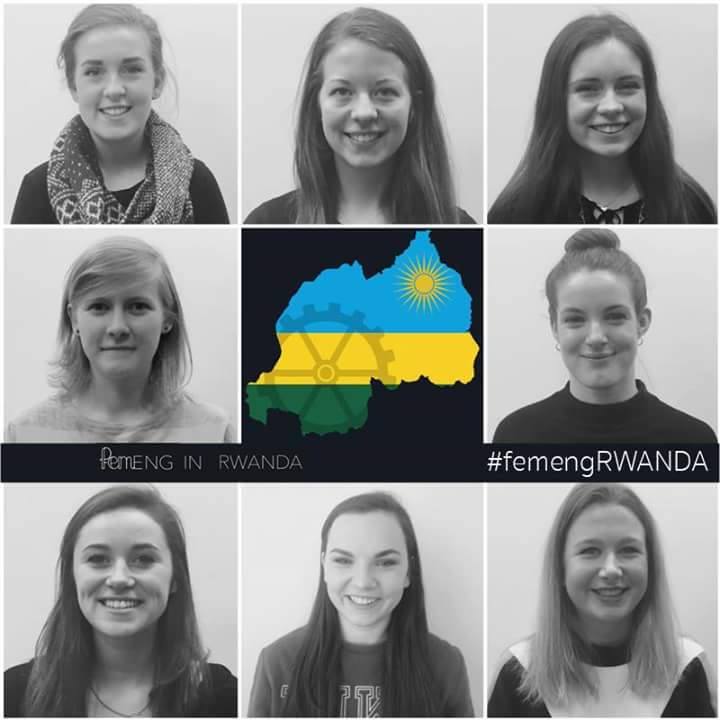 Emily Breen is a Product Design Engineering undergraduate student, studying at Glasgow University and the Glasgow School of Art.