Slaying Bacteria with Their Own Sword

“There’s the danger that the ignorant man may easily under-dose himself, and by exposing his microbes to non-lethal quantities of the drug, make them resistant.” – Alexander Fleming, Nobel lecture, 1945.

Unfortunately for Alexander Fleming, this warning was not met with haste. Throughout the 20th century there has been a gross misuse of antibiotics, and this trend doesn’t seem to be changing any time soon. The chronic abuse of antibiotics is really shown in its true light when it is estimated that 50 million courses of antibiotic treatments are prescribed in the UK every year, and approximately half of these are not necessary 1. The antibiotic arms race between humans and bacteria has reached a critical point; the bacteria are now winning, with the emergence of extensively drug-resistant bacteria spreading at an alarming pace across the globe. Not even the heavy-duty antibiotics used as a last resort, like polymyxins, are effective anymore 2. 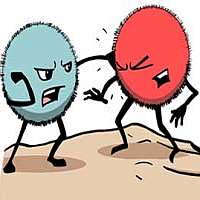 Innovative approaches need to be explored with urgency to stem the morbidity and mortality of a self-inflicted atrocity. It is understood that bacteria are fighting two battles: 1) a constant civil war between different bacterial species to establish dominance within a niche, and 2) overcoming the endless onslaught of antibiotic cocktails. We need to fight resistant bacteria with every tooth and nail, but the reality is that no silver bullet that can reverse the damage. However, a great pool of anti-microbial diversity exists within these populations of pathogenic bacteria due to the highly evolved armories used for bacterial warfare.

Bacteriocins are a powerful arsenal used in bacterial combat. Bacteria can sense when they are under attack by other bacteria, and as a method of defense they produce these small anti-microbial proteins. Bacteriocins are similar to poison darts: they are fired out of the defending bacteria and they subsequently penetrate the offending bacterium, releasing a potent protein-based toxin into the cell. The mechanisms of toxicity are very diverse, ranging  from chopping up the entire DNA content of cells to stabbing holes in the bacterial membranes resulting in the cell contents leaking out 3.  Gruesome!

At the moment there is a colossal shift of emphasis to identifying and characterizing novel bacteriocins. The sex appeal of these bacteriocins compared with synthetic antibiotics produced in commercial labs is that they are made of amino acids, which means that they are easily metabolized by the body. Furthermore, their narrow spectrum of killing results in the ability to target specific types of bacterial infections without killing all of the good bacteria in the gut, which are all essential for a healthy immune and digestive system 4 5. In addition, this research of characterizing novel bacteriocins can be initiated in hospital laboratories by isolating new strains of pathogenic bacteria, sequencing their genomes and then mining for novel bacteriocins by harnessing the power of computational biology; thus, taking advantage of the constant evolution of bacteriocins used in bacterial warfare.

However, it is still early days in the world of bacteriocin research to begin using these in a clinical setting. Despite the lack of bacteriocins present on pharmacy shelves, the published research looks very promising. For example, bacteriocins from the common hospital-acquired pathogen Pseudomonas aeruginosa have been shown to be incredibly potent at killing different strains 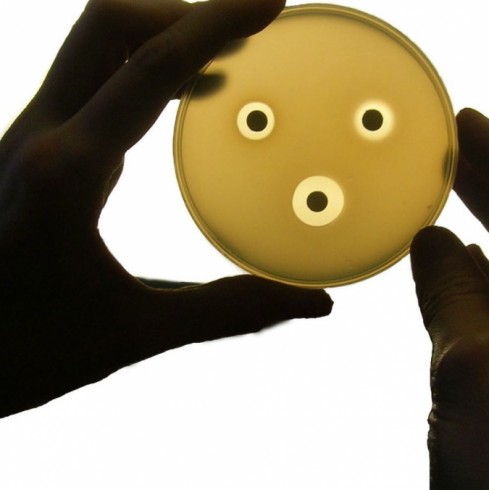 Zones of bacterial killing. Filter paper impregnated with an antibiotic (left) bacteriocin (right) and a combination of the two (bottom).
Image credits: https://www.bio.umass.edu/biology/research/gbi/bacteriocin-mediated-microbial-warfare

of the same species within a biofilm – a bacterial slime that is difficult for antibiotics to penetrate 6 7. Even after clinical trials, there is still a big question mark regarding how these bacteriocins will be transported and stored because they are protein-based drugs, meaning that they will perish relatively quickly compared to other drugs. However, altering the biochemistry of these bacteriocins in an attempt to improve their stability might also affect their potency  8. These are big issues that need to still be addressed. Nevertheless, the potential of bacteriocin research and its impact on saving lives is evident.

The current formula for overcoming antibiotic resistance involves identifying or creating synthetic small-molecule antibiotics, combined with changing attitudes towards chronic antibiotic abuse. This has so far been put into practice with limited success. The powerful addition of highly versatile and potent bacteriocins into the equation could make this a winning formula.

Currently doing a PhD in plant pathology at the UofG with a general interest in how bacteria manipulate their hosts and how we can fight back. Outside my studies I brew my own beer, practice yoga and can normally be found in any gig venue around Glasgow.