Two astronomers and a clinical psychologist walk into a cinema…

Glasgow Film Theatre was the venue for a special Glasgow Science Festival screening of Duncan Jones’ 2009 sci-fi film Moon, where protagonist Sam Bell steadily mines Helium-3 on the dark side of the moon to feed the Earth’s ever growing energy needs. He lives in isolation aboard Lunar Industries’ moon base, Sarang, save for the company of artificially intelligent GERTY, but following a serious accident, it becomes apparent that GERTY is no longer Sam’s only companion. An apparent clone of “original” Sam but with a more volatile and angry personality, “new” Sam and the mellower original Sam soon come to blows. The remainder of the film sees original Sam’s mental and physical wellbeing critically deteriorate and only through cooperation with his doppelgänger can original Sam hope to survive. Eventually it becomes clear that neither of them are supposed to survive; instead their destiny is to live out a short shelf-life of lunar servitude before being euthanised and another clone awoken to take their place. With the quintessential corporate evil of Lunar Industries imminently about to land a team at Sarang to dispatch the Sams, the two men must decide who will live to fight another day.

The film’s futuristic technologies and psychological pressure-cooker made for a rich post-film discussion with the three experts: clinical psychologist Professor Andrew Gumley and astronomers Dr Euan Bennet and Graham Kerr. Audience questions ranged from whether Mars One would ever happen, to whether stowaway micro-organisms from space could kill us (perhaps!). One audience member suggested a better corporate strategy for Lunar Industries would have been to use automatons instead of clones (removing the risk of messy human emotions!). The potential psychological effects of long-term space travel and isolation really captured the imagination of the audience and the majority of questions tended towards probing the psychology of life in space. Professor Gumley described the growing interest from space agencies such as NASA in the health and wellbeing aspects of manned space travel, including the work of psychiatry professor Nick Kanas with the Human Interactions in Space research programme. Is there an ideal personality type to go to space on a one-way mission? According to the research, Professor Gumley suggested that whilst diligence and a strong task focus would be essential for the successful astronaut, a high degree of emotional sensitivity would also be necessary to ensure the emotional wellbeing of fellow astronauts. He also emphasised the key role of human relationships in building psychological resilience. 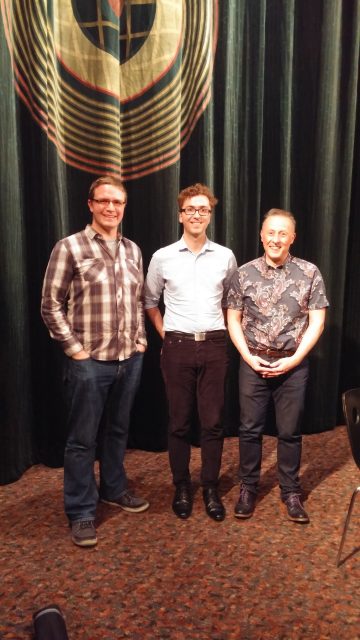 As ever, budget concerns were never far from the minds of our academic commentators and Graham Kerr described how the planned Mars One mission was more than a little ambitious for its $6 billion budget; the small amount left for astronaut upkeep would perhaps mean little chance to live long and prosper.

Dr Bennet’s pre-event research had revealed that there does not appear to be an official protocol in the eventuality that an astronaut suffers serious mental or physical illness in space, but some sources had suggested the unofficial plan may involve immobilisation by Duck Tape… If life inside the space capsule doesn’t get you then according to our astronomy experts, in the long-term, the radiation effects may well do.

The discussion around some of the ethical issues raised in Moon brought to mind Dr Ian Malcolm’s well-known quote from Jurassic Park: “your scientists were so preoccupied with whether or not they could, that they didn’t stop to think if they should.” In our race for scientific advancement, do we stop enough to consider possibility vs. responsibility?
In short, for a successful space trip, don’t stay too long. If possible, take some friends and maybe a roll of Duck Tape…

Olivia is a PhD student in the Institute of Health and Wellbeing. Her research focuses on the relationship between emotional and physical pain in self-harm.