The ‘Coldest Case on Record’: The First Human Murder

Evidence of the first ever recorded murder has emerged, after fractures found on an old hominin skull underwent serious analysis1. Perhaps surprisingly, evidence for lethal human-on-human violence is very scarce amongst fossils from the Pleistocene, an epoch spanning the world’s most recent glacial periods. So, a potential murder case raises questions about these prehistoric humans’ way of life – as do whatever they do with the body afterwards.

But short of stitching the body back together, restarting the heart and simply asking, how does one determine cause of death? And indeed, how does one do it when the deceased is 430,000 years old? 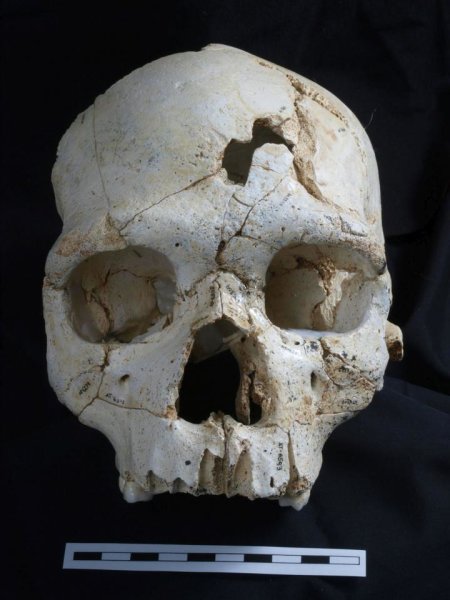 Having in their possession the fractured skull of an ancient hominin, researchers at Binghamton University in New York decided to face the challenge head-on (he he). By carefully performing a three dimensional CAT scan of the skull, they were able to precisely and accurately compare the trauma subjected to the skull.

Specifically two factures caught the eye of the scientists; oblong in shape with smooth surfaces, they were nearly indistinguishable yet their impact had come at different angles. This convincingly suggested trauma caused by the same blunt object used repeatedly. Additionally, the injuries were compatible with so-called perimortem fractures – in other words, they happened whilst the bone was still fresh and surrounded by soft tissue.

As the skull was found down a vertical shaft with a bunch of other bones (28 individuals in total), death by falling was naturally a serious consideration. However, the two fractures made it unlikely – it’s pretty hard to fall on the same object twice. So what was the person doing down a shaft?

The researchers suggest that this person may not only have been killed by another person; it is also likely to have been placed, by humans, in the shaft along with the remains of other people. In fact, it could be earliest funeral practice found in the human fossil record.

This is particularly exciting because it suggests complex thinking at an early point in human history. Of course the author of this article feels deeply sorry for the deceased, but there’s no denying that this cold case has made the Pleistocene hominins come to life.