Scientists are rubbish at communicating their research outside of academia; at least that is the opinion I took in an article I wrote for theGIST’s Science for Society conference article competition. But others must have also agreed, because it was voted overall winner on the day. However, the good news for scientists is that there are organisations like Sense About Science here to help us communicate, and the good news for me as the winner of the article competition was a place at their recent Standing up for Science Media Workshop, held at the University of Glasgow on the 20th November.

Sense About Science aims to communicate science to the public and challenge “scientific” claims. With access to a database of over 6000 scientists, from PhD students to Nobel Prize winners, they are well placed to do this. But they are also here for researchers. If your work is misrepresented, they can help. If someone tries to sue you for libel, they can help (and even change laws!). Better still, when you feel the urge to engage with the public or media, you guessed it– they can help. For early career researchers they even have a special branch: Voice of Young Science (VoYS). From questions raised during breakout sessions throughout the workshop it became clear why the work of Sense About Science is needed: are we are credible enough? Senior enough? Expert enough? Can we even have an opinion without our institution’s permission?

The first session of the workshop focused on “Science and the media”, an exploration of the experiences of real researchers. The three speakers were Dr Kirsty Park (University of Stirling), Prof. Lee Cronin (University of Glasgow) and Prof. Richard Sharpe (University of Edinburgh). This was the overwhelming message: no matter what, take ownership of your work and engage with the media! A strong case was made for blogging, whether it is personal, as a group of like-minded people, or with big initiatives like The Conversation. Importantly, decide what you want to do before you start writing: Inform? Spark debate? Be controversial? Questions were raised over the permission needed from employers for blogs, as some delegates had experienced top-down censorship. The reply from Prof. Cronin was simple: no one can block your right to an opinion, but they can fire you “for gross professional misconduct”. So long as you are not being overwhelming controversial/offensive you should be fine.

Perhaps more insightful were the experiences of these researchers with professional journalism. There was a clear message: your work will be misrepresented and mistakes will be made. One report on urban gull management Dr Park was involved in producing cited a single case of someone receiving an anti-social behaviour order (ASBO) for feeding seagulls. The Evening Times then reported this as a “recommendation” to jail gull feeders. In addition, Prof. Sharpe was involved in writing a report on “Chemical Exposures During Pregnancy” specifically for health professionals, which was roundly criticised for needlessly worrying mothers after it was unexpectedly released to the public.

Should stories like these stop you engaging? Prof. Cronin asked: “the media can either misquote or make it up, which is worse?” All attending the workshop agreed it was the latter. Good media will contact you and correct mistakes, but the bad wont. If they get it wrong and refuse to correct it, we were advised to tweet, blog and write to editors; Dr Park, for example, has been asked to write rebuttals after responding to questionable articles.

Mistakes are also OK as new science is often proven wrong as we progress: we work at “the borders of ignorance” (Prof. Sharpe). Separate evidence and opinion, present the facts and then your interpretation. And if you really want to control an interview, pose the counterclaims to your stance as well. Often, journalists are there to build their careers, not make you look good; you are there to promote your research. In order to do that you are going to have to simplify, come up with analogies understandable to the layman. Big money goes into popular fields, so it is important that people can understand what you do (especially the journalist).

Left: A fabricated report recommendation in The Evening Times (31-Mar-2005); Right: an article Dr Park was asked to write in response to a controversial piece in The Guardian after responding. (With thanks to Dr Park for the news clippings).

While all three researchers were vehement proponents for engaging with both the media and the public, they made it clear that by doing so they had each opened themselves up to personal attack. Sadly not everyone is rational. The loudest shouts rarely come from the majority opinion and there is no way to argue with faith. And what was the presenters advice for dealing with this? Just ignore the haters.

Session two of the workshop illuminated what journalists are looking for, with a look at professional science journalism. The two speakers were Peter Ranscombe, freelance journalist and science graduate, and Eleanor Bradford, a health correspondent for BBC Scotland with a background in politics. Both made one point very clear: journalists have no time! News brakes fast, and they need to be on the ball, no one is interested in a story reported elsewhere last week. With changing media (aka the internet) the lunch hour is now the big deadline, having usurped the evening slots throne. This is why they do not always get in contact with the ideal researcher: Prof. so-and-so is more appropriate? That is great, but I need this info NOW and I am talking to you.

They also made another good point: if a journalist phones you, always take the call. There is a lot of news, the world won’t wait for you to give a quote. Press embargoes can help give more insightful articles, as press releases come with a “don’t publish before…” condition, but this is not always possible, especially with the live news demanded by the Internet.

Most journalists are not scientists (Mrs Bradford), so how do they choose what stories to run? Mrs Bradford gets over 100 press releases a day, she deletes most of them without opening the email! She is looking for exciting, interesting science sure, but also a sellable story. If it can’t be packaged as an engaging article it wont be run. So make sure your research is presented well, and the importance clear!

Sure, it’s a tough game, and you may have found yourself annoyed at the media for science mistakes and misrepresentation in the past. Well, don’t be. Because few journalists are scientists and so mistakes will not be noticed, and scientists don’t always present their data well. For example, would you write a 20% increased individual risk or a risk to 3 in 100 people­? One sounds more sensational than the other (Mrs Bradford never did say what this figure was in relation to).

Therefore it is important for journalists to have a network of trusted scientists and societies they can go to for advice and opinions– with their help, the story gets a whole lot better. So get out and engage with journalists! Personal contact is necessary for the best most accurate story possible.

The final session, Standing up for science, was a mixed bag. The panellists were Ross Barker, a media relations officer (MRO) at the University of Glasgow, Victoria Murphy (Sense About Science) and Lindsey Robinson (VoYS representative). Lindsey’s advice was simple: you (probably) already use social media so get blogging, get tweeting, and build an online profile. Victoria Murphy expressed the potential of large groups of young scientists, citing the >6000 database held by Science about Science and their successful campaign (started by a disgruntled early career researcher) to get the WHO to speak out against the use of homeopathy to treat HIV in Africa in 2009. 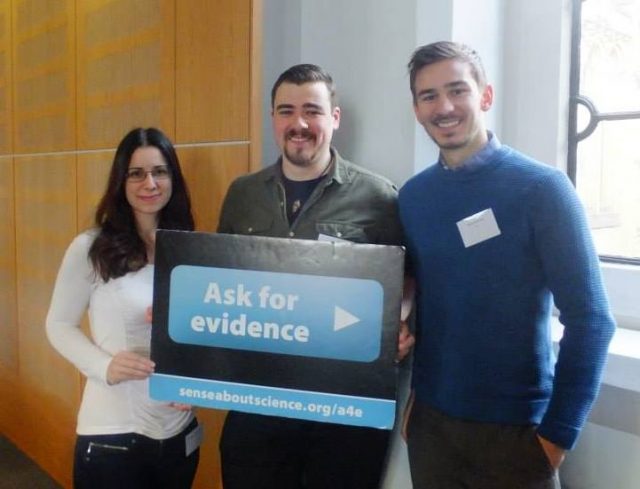 A workshop promo picture for one of Sense About Science’s current campaigns: Ask for Evidence. Can we make scientific claims more scientific? (… unfortunately yes, that is me in the middle). Credit: VoYS.

As a MRO Ross Barker connects journalists to researchers when they call, and promotes work happening within the university to the wider world. His main message was to not be afraid to talk to your MRO! They are there to help and support you. If you’re worried about an interview, they can help you prepare for difficult questioning. Or if you’re worried about something you are going to release, they can tell you if it will be a loaded/leading question for the media. Accuracy needs help.

Ultimately, this workshop was an engaging event, full of insights into how science is reported and how scientists and the media interact. The take home message was to make sure you take take ownership of your research, engage with the media and make connections with good journalists. Avoid the numpties, ignore the haters, and don’t let a few bad experiences put you off. When the call comes, answer it. But if you get out and make things happen like me, you won’t need to wait for them to call you first.