A dilemma of mammoth proportions

It is a poignant moment in Jurassic Park, isn’t it? Everyone gathered round the dining table hotly debating the ethics of a theme park filled with resurrected dinosaurs, when Jeff Goldblum‘s character, Dr Ian Malcolm, utters the reason ethics is so important in modern research: “… your scientists were so preoccupied with whether or not they could that they didn’t stop to think if they should.”
This is the question faced by researchers in the field of de-extinction, the science of bringing extinct species back from the dead. This mainstay of Sci-Fi is remarkably close to becoming Sci-Fact, with rapid developments in technology meaning that we are not only close, but have actually succeeded (albeit briefly) in the case of the bucardo, a Spanish wild goat 1.
While we are still a while away from having herds of woolly mammoths roaming the Arctic tundra, it has become clear in the last decade that the answer to “can we?” is probably. But should we? This is highly controversial, and the answer far from clear. As with many debates, opinions are both strong and polarised. So let us put de-extinction on trial before we pass judgment – prosecution before defence.
One of the major concerns of de-extinction is that of welfare. If we are going to bring a species back we had better make sure we do not cause them unnecessary suffering and pain in doing so, anything else would be both unethical and probably illegal. However, the success of cloning is far from certain.
Take our success story, the bucardo. This animal was briefly brought back from extinction in 2003 to much acclaim. But at what cost? Of 154 cloned embryos, implanted into 44 domestic goat-bucardo hybrid females, seven led to pregnancies- one went full term. However, this birth required a Caesarean section and the kid suffocated to death minutes later due to a third nonfunctional lung. A scientific first for sure, but baby bucardo had an unpleasant, arguably unnecessary, death. 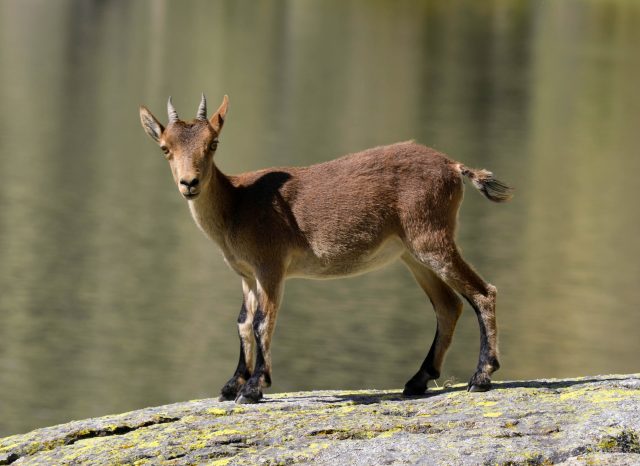 Not quite the bucardo but one of its close living relatives: young female Spanish ibex. I.Barrios & J.Ligero via Wikicommons ( License ) 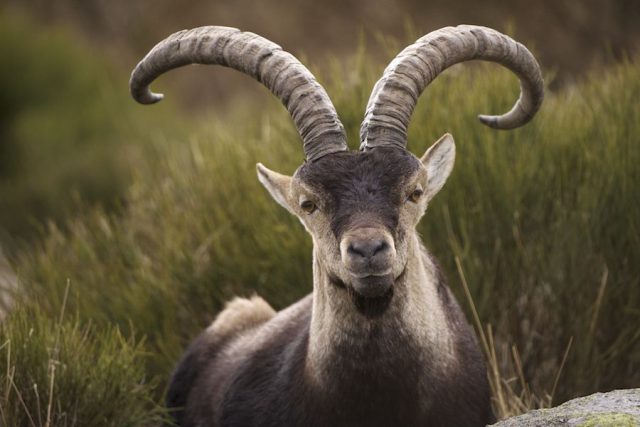 …and an impressive male showing us what the trophy hunters can’t resist. Arturo de Frias via Wikicommons ( License )

Then there is the issue of actually turning DNA into fully functional organisms. In order to resurrect the woolly mammoth, researchers plan (in essence) to take the genome of its closest living relative, the Asian elephant, and replace parts with fragments of recovered mammoth DNA . Who knows how long it will take before we get a working genome and how many times it will go horribly wrong (think of the Ripley clones in Alien: Resurrection. Not seen it? Well, don’t attempt any cloning before you do). Which genes to turn on, which genes to turn off, and which ones to skip at various stages in development are not controlled by DNA, but by developmental and epigenetic factors- non-genetic changes inherited from the parents. These cues are lost at extinction, and there is no way to know how similar they will be in an extinct species closest living relative. Was baby bucardo’s third lung the result of a gene signal misfire?
Welfare issues are not the only objection to de-extinction. While reintroducing extinct species into their former range is not introducing an alien species per se, it is introducing them into a changed environment (arguably true of any reintroduction). The poster species for de-extinction, the passenger pigeon, once soared over North America in its billions, skies darkened and tree branches broke under their numbers. However, the once great forests they inhabited have long since become farmland. The passenger pigeons de-extinction may unleash an agricultural foe to rival the incumbent rodent hordes. What once was native may become invasive, or a vector for disease- what could a billion highly social migratory passenger pigeons do for the spread of avian influenza? And what of social species with complex behaviour? Who will teach them? A passenger pigeon may be most closely related to the living band-tailed pigeon, but they have different diets, calls, habitat needs, flight patterns and reproductive behaviours.
As with all things politics and money come into play. It is easy to see why some may consider de-extinction to be a frivolous waste of money: we gave you scientists ten years and millions of dollars, did you cure cancer? Solve world hunger? No, you made a pigeon, which is fairly close to one that went extinct a while back but not quite.
Even worse is the possible impact of de-extinction on conservation. The IUCN (International Union for Conservation of Nature) lists a remarkable number of threatened species; what could be achieved by funnelling the millions, possibly billions, of dollars needed to unextinct a few species into conserving these thousands? If we can’t save what we have now, should we really be trying to bring anything back? Perhaps more sinister is the possible impact on the perception of extinction. Extinction works as a motivator for conservation largely due to its finality; once it is gone it is gone. What happens if this changes? What happens if extinction becomes a trivial matter? De-extinction could undermine efforts to protect and reduce consumption of natural resources (it is OK, go get your ivory trinket, we can always make more elephants).
From welfare to conservation the prosecution presents a strong case against de-extinction. Surely there are better things to spend our money and effort on? Well, it is time for the defence to face these allegations, and show us why we should not let the doom and gloom cloud the plethora of possibilities on offer.
The truth is that de-extinction offers an array of opportunities in countless fields of research, from medicine to palaeontology. The cloning techniques proposed are not that different from the fertility treatments giving us three parent babies 2, and even a half mammoth, or half passenger pigeon, could offer us greater insights into prehistoric lives than fossils and detective-style guesstimations ever could.
What of frivolous spending? Well they said the same about NASA, but space exploration opened the door for rapid technological advancement in countless industries 3. Far from being a waste of money de-extinction could drive technological and bioinformatic innovation like no other field. The unique challenges of taking small, degraded fragments of DNA and assembling them into a functioning genome could advance our understanding of comparative genomics, of the interplay and function of genes, of the very molecular architecture of life.
Despite the concerns conservation could actually be the biggest beneficiary of de-extinction research. If you spend millions resurrecting an animal surely you are going to make sure it has somewhere to live? This could be a massive boost for environmental restoration and conservation programs. They may even aid in the restoration. The reintroduction of wolves into Yellowstone National Park (USA) is claimed to be creating a more balanced and biodiverse ecosystem 4, and it has been suggested that the reintroduction of the extinct dodo could help the ailing Mauritian tambalacoque tree .
Conservation efforts may even utilise the technology developed by de-extinction attempts. The proposed approach for bringing back the passenger pigeon, an ingenious method of getting chickens to lay passenger pigeon eggs 5, could do wonders for the captive breeding of many critically endangered birds. Of course this would need to be done in tandem with eliminating the factor causing the species decline: it would be no good bringing an animal back or boosting its numbers for them only to die out all over again. Also, it is unlikely that de-extinction could undermine traditional conservation, as recently un-extinct species would require considerable conservation themselves. However, it may offer a line of last defence, a source of hope in the face of failure.
Some extinctions are unavoidable, like the loss of many amphibians to the scourge of Chytrid fungus. But what if we identified candidates for de-extinction before they were lost? Imagine if we could select species with suitable habitat, surrogates and simple enough behaviour to realistically resurrect and ensure adequate genetic material is collected before it is too late?

Perhaps the most compelling, and yet intangible, de-extinction arguments come down to morality and justice, a gut feeling of right and wrong. For those of faith extinction may not be seen as a loss, rather a removal by a higher power. Others, who don’t quite get the theory of natural selection, will argue that it is only natural that they are gone, conditions changed, they failed to adapt, tough luck! But for many a sense of justice creeps in. Humans are incredibly efficient at making things extinct. By hunting or habitat alteration we have an insatiable appetite to drive species beyond the brink. Do we not have a moral duty to bring them back if we can? This is tricky: human rights we understand, but what rights do animals have? And how far do we go? How do we decide between one lost animal and another?
The adage goes “let sleeping dogs lie”, but I can never resist the urge to pick up a sleeping puppy. Do you think scientists will fare any better with a “sleeping” mammoth? Like it or not de-extinction is rapidly approaching- the potential technological developments are more than enough to secure funding, and a sense of awe enough to motivate scientists. We must be cautious, prudent and wise in our decisions regarding de-extinction, but also ready to grasp the opportunities unleashed. Ultimately, time will judge the ethics of de-extinction- so until we see a mammoth, court adjourned.

A dilemma of mammoth proportions by James D. Burgon was specialist edited by Jo Foo and copy edited by Eloise Johnston.