The dinner took place in the basement of the Stravaigin restaurant, which is known for its innovative and high quality menu.

Inspiration for the dinner came from the observation that nowadays, in times of genetically modified and highly processed food, we often don’t know what our food contains. One of the most significant incidents was the horse meat scandal last year, where horse meat was found in food that was not declared as containing any of it. After the scandal, a kit came onto the market with which you can easily detect horse meat by polymerase chain reaction, (PCR). PCR is a fast and simple standard method used in most molecular biology labs. The only disadvantage of this method is that if you want to know what is in your sample, you have to screen for everything individually. Sequencing, however, is a bit more expensive and time-consuming, but you get a lot more information. After a single sequencing run you know exactly what your sample contains. You would be able to detect DNA from an indefinite number of species, plants or animals. The idea of this dinner was not to be aware of what you’re eating and to be told only afterwards, once the food has been sequenced.

At this dinner the concept of not knowing what you eat was put to an extreme, by not even knowing the main ingredient – the heart of the dish. When I registered for the event I found this idea very exciting; the closer it came, however, I had increasing doubts as to whether this kind of thing would be right for me. How do you go from being hesitant about trying new things to trying something without even knowing what it is? 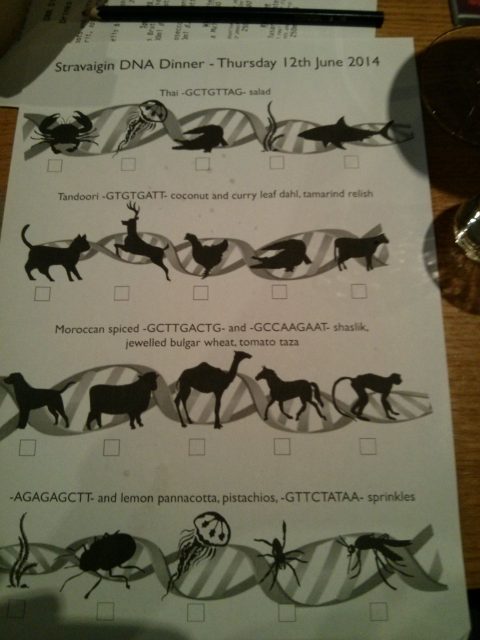 At first we received a menu, showing the possible main ingredient for each course, with tickable boxes for your guess below. The options for the first course, a Thai –GCTGTTAG- salad, didn’t exactly increase my confidence: shrimps, jellyfish, crocodile, algae or shark. Not being a big fan of seafood, I was not hoping for shrimps or jellyfish. Once the course arrived I was already more optimistic. A very nicely served, delicious looking salad, topped with coriander and sesame seeds, which even smelled good. I started to eat and couldn’t find anything suspicious or disgusting, it was quite an ordinary salad. My table neighbour soon identified jellyfish, as she had eaten it before. It was only then that I discovered something white with a smooth surface. Unexpectedly it was not slimy at all, but had a rather solid consistency and no identifiable taste of its own. After this first experience I was curiously, in good expectations, waiting for the second course. A Tandoori –GTGTGATT- coconut and curry leaf dhal with tamarind relish. The options here: cat, deer, chicken, crocodile or beef. As I didn’t expect cat to be served I was pretty relaxed about this course. It was again beautifully served with a small salad on the side. All of us had tried the given options, apart from cat and crocodile, before so we soon identified crocodile as the meat ingredient. It almost tastes like chicken; the consistency is a bit more solid. Crocodile turned out to be a very tasty meat and it went very well with the curry.

According to our menu, the third course, Moroccan spiced –GCTTGACTG- and – GCCAAGAAT- shaslik, jewelled bulgar wheat and tomato taza, would contain two kinds of meat: dog, sheep, camel, horse or monkey. We soon identified sheep and were torn between camel and horse, for the second kind of meat, as we hadn’t tried either one and the sheep was rather dominant. We therefore had to wait for the result.

The options for the dessert, -AGAGAGCCT- and lemon panna cotta, pistachios and -GTTCTATAA- sprinkles, were again a bit delicate, containing two of the following ingredients: algae, beetles, jellyfish, spiders or mosquitos. Algae were easily identified, as they were used as decoration on top of the panna cotta. After removing the algae, we discovered some jelly-like, transparent kind of pudding in the middle of the panna cotta. The pudding contained some dark spots and by having a closer look at them we identified, you won’t believe it, midges! Ok, this was definitely the climax of the dinner, midges! Being proud to have tried everything so far I didn’t want to disappoint myself and tried the pudding. Midges are so tiny that you really don’t taste or feel them at all in your mouth, but after seeing them in your dish it definitely requires quite an effort to eat it. 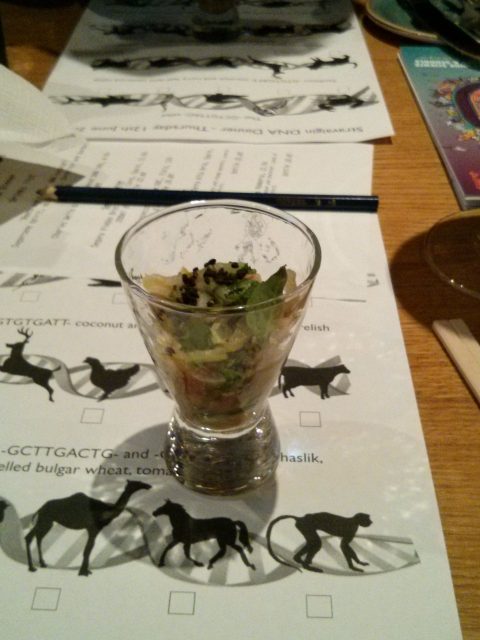 After dinner, satisfied from the good food and still amused about the midges, there was a questionnaire and we had the opportunity to earn a bachelor’s degree in Foodomics. Even though we didn’t pass the exam we still learned some interesting facts. Virgin boy eggs, for instance, are eggs that are boiled in urine from young boys and are Chinese delicacy. Moreover we learned that lettuce is the major cause for food poisoning in US.

In order to visualize and unravel the mystery of DNA a bit, the last highlight of the evening was to isolate our own DNA from oral mucosa cells. This is in fact much easier and faster than expected. All you need is saltwater, a detergent, such as washing-up liquid for instance, and ethanol – in our case vodka. In the end you can see two phases in your tube and DNA at the interface. With a toothpick you can pull out the DNA, a viscous thread.

We then finally found out about the sequencing results. We were right with all our guesses and the second meat in the shaslik turned out to be camel. I just hope the chef knew what he had served before obtaining the results.
Altogether it was a very exceptional and tasty dinner – I hadn’t thought that I would ever try so many exotic things at once. It certainly broadened my horizon and has encouraged me to try more strange food items in the future.