Conservation, Class, and the Extinction Crisis

Either you know, or are, someone who spent their gap year building schools in Kenya/caring for elephants in Thailand/conserving orangutans in Borneo/scuba-diving on coral reefs in the Bahamas, and probably, unless you are that person, you’re sick of hearing about it. If you are that person – hopefully, you won’t take the rest of this article too personally.

Activism in the UK is fast becoming the realm of the middle class: particularly students and particularly the wealthy and white. We fly to far-off places, meet exotic people, and try to help them. We build schools, bridges, and wells; we ‘exchange cultures’, learning a few, stumbling words of the local language, eating some local dishes, before calling it a day. And in some cases, we do help. In others, we provide the locals with a couple of weeks of headaches, before heading home to our central-heated houses and round-the-clock electricity, to tell our friends about all the wonderful things we did. We saved up enough karma to carry us through another year of Starbucks, plastic straws and polyester clothes.

In this way, activism is a gimmick, a hobby that can be picked up and dropped when convenient, made fashionable, and by extension, inaccessible, by the wealthy and well-intentioned. It can be written on CVs, provide dinner-party conversation, and gives us heartwarming photos to show Tinder how interesting and well-travelled we are.

This isolation – activism as an act with a start and end point for the individual – compounds the misconception of conservation as a series of singular concerns. We pick a country, a village, a species as our ‘speciality’, and ignore the deeply complex global systems that lead to the specific situation we fly into. Poverty is a global, social structure and, unlike activism, it cannot be picked up and put down. Poaching, in most cases, is the resort of the poor and disenfranchised; those with few other choices. Increased spending on drones, security guards, rangers, electric fences and guard dogs won’t change the fact that for billions across the world, starvation is a far more pressing concern.

Conservation is a global concern and it starts and ends with people. Having spent time working with rhinos in South Africa, I often found myself pushed into an ‘us versus them’ narrative; the rhinos and their defenders on one side of the conflict, with poachers (usually black; almost always male) on the other side. When immersed in that environment, it is very easy to forget the political and social systems in South Africa which make poaching a more viable alternative to finding legal work. Post-apartheid South Africa has high levels of unemployment, especially among black communities – up to 27.7% in 2017 – and there is a significant wage gap between black/white and male/female employees. It’s worth checking out Overcoming Poverty and Inequality in South Africa: An Assessment of Drivers, Constraints and Opportunities for further reading.

Only upon my return to the UK did I begin to examine the larger picture. We’ve all seen articles about poachers killed by the animals they were hunting, and the comments section is almost always full of gleeful praise for the animal. Don’t get me wrong; in no way do I condone poaching, but at what point does a person’s life become worth less than an animal’s? Even if that person is black, poor, male, foreign, or anything else that we, the British middle class, might find distasteful?

It is important to consider these things when planning any such trip. My first visit to South Africa cost me £1200, run by a charitable organisation, and I can’t help but wonder how much of it went to the reserve at which I volunteered – whether that £1200 would have been put to better use somewhere else. While such trips are subsidised by donations, organisational funding and, depending on the trip, occasional research funding, it is hard to know exactly how much of my money went to the reserve and how much was internally distributed within the organisation.

Despite the tone of this article, I am not criticising the impulse to go on these trips; climate change is one of the most pressing issues we face in today’s world, and I truly believe everyone should not only travel but interact with the places they go. The problem is that travel is a luxury, accessible only to those with a certain level of wealth. Volunteering abroad is, at its core, paying to work; there’s a cruel irony in it when 1.9 million jobs in the UK pay minimum wage or below. I highly encourage anyone considering such a trip to do their research and ensure the money you spend isn’t misdirected. It’s also worth considering the value of your labour, and whether there might not be someone local to the area better suited to the job. Before flying to Kenya to help build a school, for example, consider whether you would be willing to go to Yorkshire to build a school. After all, 18-20% of primary schools in the UK are over capacity and out of space.

Conservation is marketed to the British middle class as a series of individual, ground-level problems which can be solved with manual labour and plenty of cash. While these things certainly help, they’re not the cure to our dying world. We need empathy, cohesiveness, and understanding. There’s enough money out there to save the world a hundred times over, but conservation efforts are disorganised, in opposition with each other and the communities affected by their projects. Shipping a group of white British teenagers to a remote reserve in South Africa isn’t going to save the rhino, no matter how many times you do it (and at some point, the carbon footprint from the 11-hour flight offsets any good they do when they get there). The only way to sustainably prevent poaching is to make it no longer worthwhile, even to the most desperate people. The way forward is an acknowledgement of global inequality and oppressive systems, accompanied by a careful redistribution of power.

This article was specialist edited by Jonathan Bowes and copy-edited by Claire Smith. 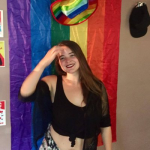 I am a final year neuroscience student and creative writer with ADHD, and if you think that sounds exhausting, imagine how I feel. I travel a lot, having lived in Australia and worked in South Africa, and my primary motivation for everything is food.