I know what you’re thinking; can we go back in time and have a comedic adventure with Doc and Marty McFly? The quick answer is no, we haven’t determined the nature of time and built a time machine in a flying car. However, we have come across a new, exciting phenomenon in the physical world. Originally proposed by Nobel Laureate Prof Frank Wilczek in 20121, time crystals are now being researched in several labs across the world. A crystal that not only repeats in space but in time as well. A new stable form of matter, on a quantum scale.

The concept is still in its early stages and the researchers have only been able to generate time crystals for miniscule amounts of time. However, it is believed they could improve atomic clock systems, gyroscopes and magnetometers. The US Department of Defense are even interested in developing time crystal systems, possibly opening a lot of doors in quantum computing. 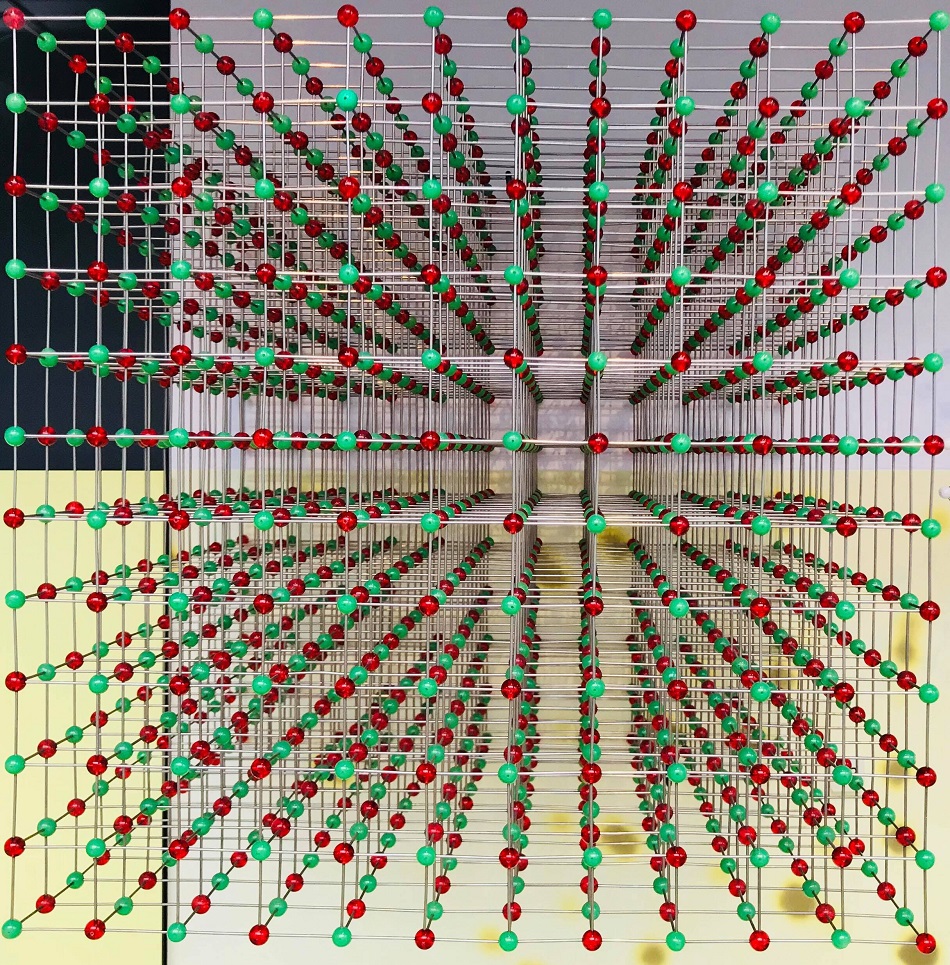 As the name indicates, time crystals are intricate and complex. In simplified terms, time crystals play with the idea that if something can repeat physically, it can repeat in time. Like a sine graph that repeats forever, time crystals hypothetically repeat in time forever. You can’t really see or hold a time crystal since it’s so small and fleeting. Possibly the most curious thing about time crystals, is they could be a new form of matter due to being in a non-equilibrium state (meaning you can’t define the temperature of the system). Similar to eating a mint and a ghost chilli at the same time, and being asked whether your mouth is hot or cold, you probably won’t be able to give a clear answer.

Before getting into more molecular detail and quantum madness, lets cover the basics: what actually is a crystal? We think of them as fascinating jewels that can fetch a pretty penny from the right buyer, but they are also used as cutting tools, lasers, and even in watches to regulate time or prevent nasty scratches. In general, there are two types of solid; amorphous and crystalline. Amorphous solids don’t have a set shape, pattern, or geometry due to the atoms being arranged randomly. For instance, when glass breaks it has a seemingly random shatter pattern because the arrangement of atoms isn’t consistent2. In contrast to this, crystalline solids have an ordered repeating pattern in space and are relatively stable, which is key to the functionality of time crystals. 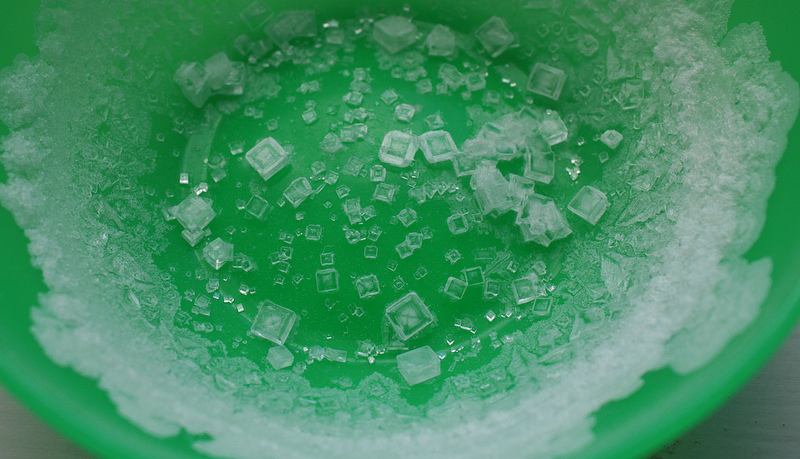 Wilczek initially thought that since crystals have a regular repeating pattern in space, it may also be possible to have a repetitive pattern in time. This means it not only repeats in three dimensions like a normal crystal, but it also repeats in the fourth dimension of time. The first problem with this is that time crystals would then theoretically be a perfect perpetual motion machine, i.e. a machine that can continuously work without any input –  like a watch ticking without a battery. However, this has been debunked, with the only perpetual motion machines being those of fantasy and witchcraft. Prof Xiang Zhang and his team instead proposed the idea that the crystals’ behaviour would be similar to a superconductor (a material capable of conducting electricity without resistance), where electrons travel in a loop without having to add extra energy since there is no resistance in the material. Instead for time crystals, ions would be trapped in a ring like structure with a static magnetic field 3. They alluded to this since superconductors are also systems which can break translational symmetry. Time-translational symmetry is the assumption that the laws of physics cannot change with respect to time, in other words, they are the same everywhere all the time. For instance, I can assume the same thing will happen if I throw a ball, whether it’s now or 1 minute later. However, it was found that this is not correct either. In 2013 several papers were published showing this theory was impossible 4.

Prof Norman Yao and his team at Berkeley came up with a solution to the conundrum in 2016 5. They suggested adding an external force to kick-start the crystal by causing one of the atoms to flip the direction of its spin, causing the next atom to change spin and so forth. This sets off the self-oscillating process where the electrons can move and swap without losing energy. This would change the system from a closed system to an open one, taking the system out of equilibrium, meaning that time crystals could be possible without contradicting previous research. Basically the time crystal is a car with a dead battery, what it needs is a good jolt and it will be on its way. This idea gets into the real nitty gritty of quantum mechanics, since the spin-flipping is caused by entanglement of the electrons. Quantum entanglement is when particles exhibit dependent  behaviour even when spatially separated. This provides an explanation for the phenomenon that was deemed a failure of classical mechanics, and that Einstein referred to as ‘spooky action at a distance’.

Two teams of researchers have tested this idea in 2017 with success. Prof Mikhail Lukin and his team at Harvard have created a time crystal from diamond with nitrogen impurities6, tested using x-ray diffraction 7. The team led by Prof Chris Monroe at The University of Maryland, used 10 ytterbium atoms in a closed system to test the theory 8. Both came back with similar results. In the ytterbium atoms experiment, two lasers were used to kick-start the atom flipping process. One flipped the spins and the other made the ions interact with each other. This made the ions oscillate at a periodicity twice that of the original laser. For the diamond with nitrogen impurities, microwaves were used to disturb the impurities at regular intervals. Again the atoms spin-flipping had a periodicity twice that of the source used. This, along with their rigidity, is believed to be characteristic of time crystals 9.

The findings in these experiments show really weird and strange behaviour, as it would be expected the time crystal would oscillate at the same frequency as the laser used to start the movement. Imagine rowing a boat, with every stroke moving 1 meter forward, but this time you make two or even three strokes and only travel 1 meter. It doesn’t quite add up.

An even more recent Yale study has found that time crystal behaviour could be found in fertiliser or chemistry crystal growing kits. Phosphorus atoms in commonly occurring ammonium dihydrogen phosphate crystals reacted to radio waves with twice the periodicity of the radio waves themselves10.

Finding time crystals in such a common source material is encouraging for those wanting to exploit their unique properties.

In regards to quantum computers, they could offer a solution to the problem with qubits. Otherwise known as a quantum bit, a qubit is the basic unit of information in a quantum computer, similar to a bit in a classic computer which has the binary value of 0 or 1. Qubits behave strangely when being observed or measured, even disappearing, making it difficult to predict and understand. Forming time crystals could counter the current problems faced with the necessity for low temperatures or strong vacuums for them to exist coherently, by creating a stable state for qubits to exist at normal conditions 11.

Time crystals are still a very new, esoteric matter of discussion, with applications for the crystals still years away from being utilised. Time crystals are very much a fact, but time will tell if this can merge with the fiction, to bring some new technology we can only dream of currently.

This article was specialist edited by Husni Almoubayyed and copy-edited by Kirstin Leslie.

Amy is a student at University of Strathclyde studying Applied Chemistry and Chemical Engineering. She enjoys reading and playing piano and oboe in her spare time.