Last Tuesday night theGIST was out on duty again, attending the 13th Wellcome Image Awards ceremony. Wellcome Images is an impressive collection of images from various scientific fields, such as medicine and social history, and is a part of the Wellcome Trust, a global charitable organisation which aims to improve human and animal welfare. Every year, a panel of judges picks the most outstanding pieces from the recent acquisitions of Wellcome Images, which go on to be publicly displayed.

This year, the 18 winning images will be exhibited simultaneously starting from the 12th March, in multiple locations around the UK – the Glasgow Science Centre, the Museum of Science and Industry in Manchester, Techniquest in Cardiff and W5 in Belfast. They will also be showcased at the Wellcome Trust headquarters in London and the Ruskin Gallery in Cambridge and are available from the comfort of your own Internet browser on the Wellcome Images Awards website.

The overall winner of the competition was Anders Persson, professor at Linköping University in Sweden and director of the Centre for Medical Image Science and Visualization. His submission was a 3D depiction of a functioning mechanical heart pump (coloured blue in the picture above), which was placed in the chest of a patient awaiting a heart transplant. This image was created with the aid of dual-energy computed tomography, a non-invasive diagnostics and virtual autopsy technique. Many X-rays were put together to create a 3D model that could easily be visualised. Then the colour and opacity of different tissues were manipulated in order to emphasise the pump at work. 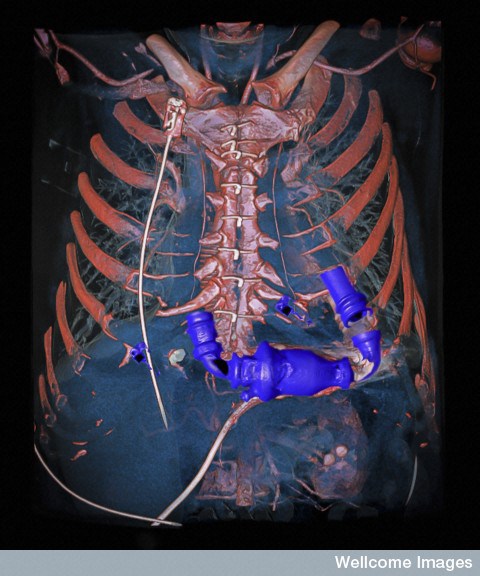 At the Glasgow Science Centre, visitors will be able to explore the details of each image on a large touchscreen and admire, among other things, the exotic pattern of a light micrograph of oxidised Vitamin C crystals or the colourful rendition of doxorubicin attacking cancerous cells.
You can also get up close and personal with a zebrafish embryo, a tick attached to a human leg (maybe best not to zoom in too much on that one!) and an eerie x-rayed bat. 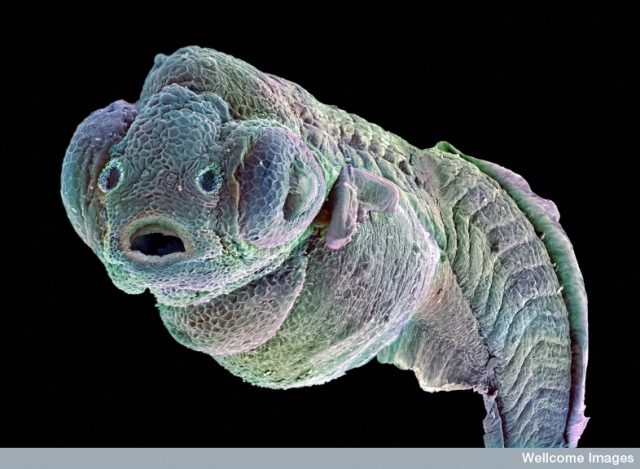 Capturing these breathtaking images involves a lot of work. For example, the zebrafish embryo (shown above) had to be chemically fixed, then dehydrated in alcohol, before being imaged by a scanning electron microscope. The embryo, at 1 cm in length, was too big to be captured in a single image, so three separate images had to be taken and stitched together digitally. False colour was finally added to produce the final representation of the specimen.

If you are in Scotland, Glasgow Science Centre is the only place you can view these images, so go and check them out!