The Psychology of Happiness

Psychology has traditionally been concerned primarily with suffering; over the past century psychologists have made great strides in the assessment and treatment of mental illness, but comparatively little research has explored positive human experiences. In recent years however, significant progress has been made in understanding the good life, and we now have a number of methods by which to measure happiness, life satisfaction and positive emotions.

Using these tools, psychologists have discovered that most people are happy most of the time, although (unsurprisingly) some individuals are happier than others. More surprising however is the finding that individuals’ levels of happiness are moderately stable over time. For example, Lykken and Tellegen 1 collected individuals’ scores on the Well-Being scale of the Multidimensional Personality questionnaire (MPQ WB) at two points in time, ten years apart. The MPQ WB is a self-report questionnaire that assesses the extent to which individuals are optimistic, and feel that their lives are interesting and enjoyable. The two scores were found to be highly correlated, suggesting that a substantial component of individuals’ happiness is stable over time periods as long as ten years.

Furthermore, there is a sizable genetic component to happiness. Evidence of this comes from twin studies, where researchers compare identical and non-identical twins – raised together or apart – on the similarity of their scores on happiness measures. By comparing such twins’ scores, researchers are able to derive a measure of hereditability, which is the amount of variation between people that can be attributed to genes. In one of the first behavioural-genetic studies into happiness, researchers estimated the hereditability of MPQ WB scores to be .48, which suggests that around half of the variation in happiness can be attributed to shared genes 2. 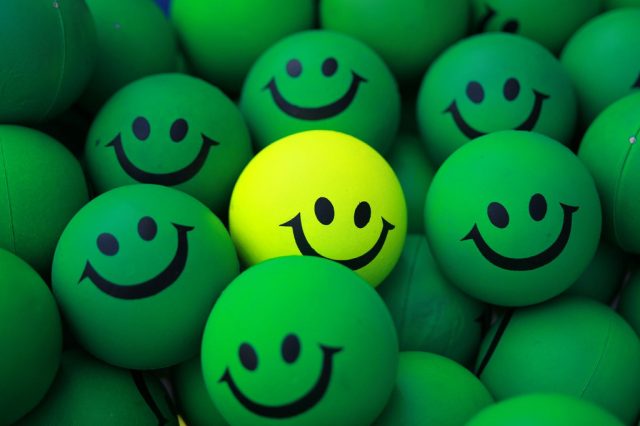 These data suggest that a significant portion of the differences between people in happiness may be due to some internal factors. One potential set of factors are personality traits, such as extraversion. Extraversion defines a continuum of behaviours, cognitions and feelings. Introverted individuals at the low end of this continuum are quiet, timid and reserved, whilst individuals at the high end are sociable, assertive and energetic. Individuals commonly think of themselves as being either introverts or extraverts, but most people fall somewhere in the middle of these two extremes and are not easily classified as either.

Instrumental explanations hold that personality influences happiness indirectly, by predisposing individuals to experience positive situations. In one study for example, extraverts were more likely to report experiencing positive events, such as getting married or being promoted 4.
Extraverts’ behaviour may also partly explain why they are happier than introverts. An individual’s score on a measure of extraversion reflects how the person typically behaves. Over a period of time however, (for example a day, week or month), individuals with low, moderate and high scores on extraversion will display behaviours that span the entire introversion-extraversion spectrum. That is to say, there will be times where extraverts are quiet, timid and unassuming, and times where introverts are talkative, bold and assertive. Researchers have tracked how individuals’ behaviour and moods fluctuate over time by asking participants to keep records of their activities and feelings for several days. These studies show that displaying extraverted behaviour (e.g. being bold, talkative and assertive) is associated with greater levels of positive emotions. Furthermore, the relationship between extraverted behaviour and positive emotion is the same for extraverts and introverts alike: both groups appear to enjoy behaving in these ways, equally 5.

These diary studies are useful as they allow researchers to track how behaviour and mood co-vary in individuals’ real lives. They are limited in that the data are correlational however: it isn’t clear whether extraverted behaviour causes positive emotions or whether positive emotions cause extraverted behaviour. To answer this question, researchers have manipulated social behaviours in the laboratory to test how extraverted behaviour influences mood and whether this differs for introverts and extraverts. In these experiments, individuals are typically asked to participate in group discussions. Prior to the discussion, and unbeknownst to the other participants, individuals are randomly assigned to act in either an extraverted (e.g. being assertive and talkative) or introverted (e.g. being shy and passive) manner during the task. The results of these experiments show that individuals who are instructed to act like extraverts in these tasks report themselves as feeling happier than those who are instructed to act like introverts – regardless of how extraverted they typically are 6.

Temperamental explanations on the other hand, hold that extraversion influences happiness directly, such that there is some fundamental difference between extraverts and introverts, which causes the former to experience more intense positive emotions. One such view is that extraversion reflects the sensitivity of the neural systems that regulate the feelings and behaviour associated with pursuing rewards. Here, extraverts are thought to be more sensitive to rewards than introverts. As a consequence, it is predicted that extraverts will experience more intense positive emotions in response to rewarding situations than will introverts. This can be tested by presenting individuals with stimuli or situations designed to induce positive moods – such as film clips or tasks with monetary rewards – and comparing how introverts and extraverts respond. To date, the research has supported this prediction to an extent. For example, extraverts appear to experience greater levels of high-arousal emotions, such as excitement and enthusiasm, in response to situations that involve pursuing rewards or working toward goals. On the other hand, there doesn’t seem to be any difference in how extraverts and introverts respond to merely pleasant situations that induce feelings of satisfaction or pleasure 8.

Happiness appears to be moderately hereditable and stable over time, and has consistently been found to correlate positively with extraversion. There appear to be several direct and indirect pathways through which personality influences happiness, such as how individuals differ in their behaviour and reactivity to rewarding situations. Understanding how personality influences our happiness is one step towards explaining why some people are happier than others, which may lead to the development of interventions designed to improve well-being. On the other hand, it’s important to remember that personality is only one of many influences on happiness, and that our personality traits do not determine how happy we are. How happy we are can and does change over time, often in response to life events 9. Our understanding of happiness will improve greatly once we identify how these various internal and external processes interact to influence our sense of well-being.

Greig is a third year PhD student in psychology at the University of Strathclyde. His research interests are in personality and subjective well-being, and how particular personality traits are related to happiness.