A Need to Chill

To people outside the field of chemistry and physics, it may come as a surprise that one of the most mysterious compounds out there is actually one we consider most commonplace: water.

There are several funky facts about water, some of them less understood than others. One such property of water is the so-called Mpemba effect, named after a cookery student who discovered (although he doesn’t seem to be the first) the curious phenomenon of hot water freezing faster than cold water. In a new paper, currently only available in pre-print, a team of researchers from University of Singapore offer their attempt at an explanation, which they believe can be found in the stretching of hydrogen bonds.

But let’s take this from the top and give the whole thing a think. Naturally, questions (delivered with sceptically raised eyebrows) should be asked when someone claims what Mpemba claimed. How hot is hot water – boiling, room temperature? How cold is cold water – ten degrees, just over freezing? And is something frozen once it’s gotten to 0 degrees? (Hint: maybe.)

And the million dollar question: how in the marvellous world can this possibly be true, when hotter water absolutely has to bypass the temperature of the cold water to first make it to the freezing finish line?

Because of the questions regarding the conditions under which water can freeze – and several more, including purity and container material – the effect has been somewhat elusive. To this day, people still argue whether or not an effect can actually be established. As Mpemba’s own, early evidence is anecdotal, and many have wondered if the effect isn’t due to some special conditions interfering with what would normally happen, rather than due to inherent water properties.

That being said, the Mpemba effect has been demonstrated several times. It in unhelpful to think about it in terms of ‘the Mpemba effect causes this to happen’, it should be thought of as ‘when hot water freezer quicker than cold, the Mpemba effect is demonstrated’. Naturally, it doesn’t happen under all conditions (say, boiling water and cold water at 2 degrees), but it happens under certain ones. 1
Its fleetingness has made it quite the darling with many chemists. Several hypotheses exist on the matter, and in 2012, the Royal Society of Chemistry even set up a competition to be won by the person, who could offer the best explanation of the concept. 2 So what explanations do we have?

One of the most famous explanations is the supercooling effect. Supercooling happens when a liquid manages to go below its freezing point without freezing and thus stay a liquid longer. The phase change from liquid to solid is essential – this is what freezing means, not whether water reaches 0 degrees. It turns out that supercooling can, somewhat at least, explain the Mpemba effect; cool water appears to sometimes supercool to a lower temperature than warm water. That means that if cool water supercools till about -8 degrees, and warm water only supercools till about -1, they will effectively have different freezing points – and therefore the warmer water may make it to freezing (and hence ice) before the cool water. Exciting! Fantastic! A little bit odd! However; it still leaves the problem of explaining why warm water supercools less than cold water. What makes the difference?

It so happens that we don’t know. Supercooling is a tricky thing, and it appears that nearly identical samples may or may not have different supercooling temperatures (i.e., their new freezing point), which arguably makes things harder. It also means that it becomes more difficult to test experimentally. Undoubtedly, some more thinking needs doing.

Thankfully, that’s exactly what people are up to. The most recent attempt at a different explanation is from Singapore and has to do with hydrogen bonding. 3 Most people will know that a water molecule consists of two hydrogen atoms and one oxygen atom. These are covalently bonded to each other, meaning that they share electrons. This bonding, between the atoms, thus takes place within the molecule and is what is called an intramolecular force. Molecules however tend to stick together in groups, and they do this on the basis of intermolecular forces, causing attraction between the molecules. The strongest type of intermolecular force is that which arises between hydrogen and either nitrogen, fluorine or oxygen: hydrogen bonding. 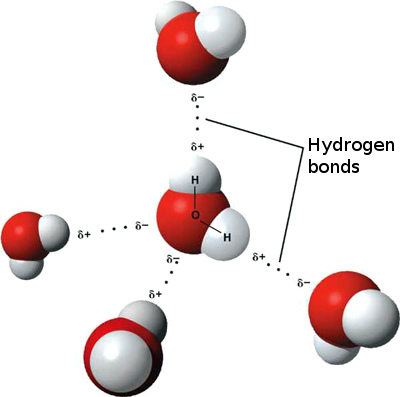 The Singaporean researchers set up a series of experiments, testing different conditions for the Mpemba effect, and managed to identify stretching of hydrogen bonds as what they believe to be the key to the paradox. Their explanation goes as follows:
When water is heated, the molecules begin to move. This means the intermolecular bonds have to soften and stretch to allow for movement and flexibility. As this happens, the covalent bond between oxygen and hydrogen within the molecule shortens and stiffens up, locking in and storing energy from the heat. 4

When you then start to cool the water, the hydrogen bonds contract, allowing the stiff covalent bonds to soften and, as a consequence, release the stored energy. Just like energy is needed to heat something, energy release means cooling. This creates a second cooling effect, parallel if you will, to the normal cooling of just lowering the temperature.

The second cooling effect is what makes all the difference. As the energy is released, causing additional cooling, the water which was initially warmest will overtake the cooler water on the way to freezing. It was found that the rate of energy release is proportional to the initial temperature of the water, and this creates the Mpemba effect, according to the researchers.

The hypothesis is particularly exciting because it focuses on the properties of warm water rather than the properties of the cooling itself – exactly the angle we need to investigate. Whether or not the hypothesis will gain strength from further corroboration remains to be seen, but it is, nonetheless, a nice example of modern scientists still working on cracking an old, old nut.